The Guardians require the aid of a human boy when they find themselves shrunk to the size of toys by Cy-Kill's newest weapon. 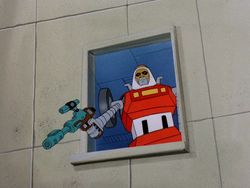 In a secret base hidden inside an abandoned human apartment building, Cy-Kill unveils his latest weapon to the assembled Renegades: a molecular transfuser invented by Dr. Go that is capable of shrinking anything. Cy-Kill demonstrates the ray on a postal worker's truck parked on the street outside, first shrinking it then returning it to normal size... unaware that the display has been witnessed from the next building over by a young boy named Nathan! Nathan, unfortunately, has a propensity for telling tall tales, so neither his friend John nor his own mother believe him when he tells them what he has seen. He tries to leave to check the next building out, but his mother orders him to clean his room instead. 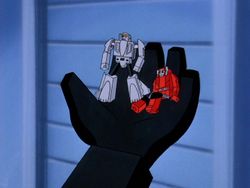 Cy-Kill radios UNECOM headquarters to demand Leader-1's surrender within the next five minutes, or he will destroy the city. Refusing to give in to his demands, Leader-1, Turbo, and Scooter split up to search the city for the Renegades. Turbo's hunt takes him into an underground road tunnel, where he is cornered by Crasher, Scales, Pincher, and Scorp, and knocked out. When the five minute deadline subsequently expires and nothing happens, Leader-1 realizes Cy-Kill is up to something. He and Scooter track Turbo down just as the Renegades are taking him aboard Thruster, but they are intercepted by Cop-Tur, and Scooter is shot down into the river below. Leader-1 is forced to divert and pull his young ally out of the drink, which gives the Renegades time to escape with Turbo in their clutches. 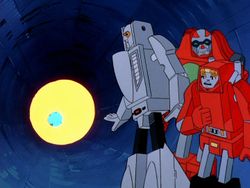 Back at the Renegades' base, Cy-Kill activates Turbo's locator pulse in order to lure Leader-1 and Scooter into his trap, then uses the shrinking ray on the captive Guardian. Turbo's comrades arrive in no time, but are quickly ambushed by Pincher and Scorp once inside the building. Dodging the Monster GoBots' blasts by diving through a doorway, Leader-1 and Scooter unwittingly jump straight into Cy-Kill's shrinking ray and are reduced in size until they fit in the palm of Crasher's hand. Though downsized, the three shrunken Guardians are not downhearted, and make an escape attempt, weaving through the Renegades attacks and getting a few licks of their own in despite their diminutive stature. The three heroes manage to make it down the building's basement, but find themselves cornered, unable to blast through the wall thanks to their power being lessened along with their size. They try to get away through a pipe, but once they have gone inside it, Cy-Kill begins super-heating it with his hand-blaster, seeking to cook them alive. Leader-1 discovers that the pipe is a water pipe, and so turns on the flow, cooling the metal down and washing the Guardians through an adjoining pipe that dumps them in the alley outside. There, they are found by Nathan, who believes they are just toys and takes them back to his room. 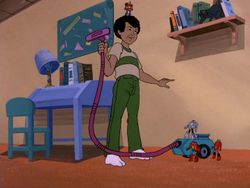 Unwilling to draw too much attention to themselves by going after Nathan directly, Cy-Kill uses the shrinking ray on himself, Crasher, Cop-Tur, and Scales so they can attack more subtly. Making their way into Nathan's apartment, they are found by Nathan's mother, but she also thinks they are toys and takes them into Nathan's room. There, they resume their battle with the Guardians, with both sides using the boy's toys as unconventional weapons. Nathan joins the fight, first trying to use his baseball glove to hold Crasher, and then, at Leader-1's suggestion, using a vacuum to suck the Renegades up. Scales, Crasher, and Cop-Tur all fall prey to the vacuum, whereupon Cy-Kill lands on Nathan's head and threatens to blast him if anyone makes another move. Fortunately, Nathan's cat isn't one to listen to orders and pounces, knocking Cy-Kill to the ground. The Guardians use the vacuum to hoover him up as well, and Nathan tosses the vacuum bag out the window into a passing garbage truck. 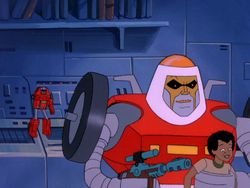 Using a hologram of Crasher, Scooter gains access to the Renegades' base, opens its armored window, and orders Pincher and Scorp to go to the roof and make ready Thruster for departure. With the room now unattended, Nathan climbs in the window and uses the molecular transfuser to return Scooter and Leader-1 to their normal sizes. Just as he pulls the trigger to restore Turbo, however, Cy-Kill bursts in the door and leaps into the path of the beam. Back at full size, Cy-Kill grabs Nathan and reclaims the shrink ray, but before he can use it on the Guardians, the still-shrunken Turbo, unnoticed by the Renegade leader, blasts it out of his hand. Leader-1 grabs it but Cy-Kill opens fire on him; Leader-1 fires back with his own hand-blaster and the two beams collide, causing a small explosion that provides Cy-Kill cover to escape. Leader-1 delays in pursuing his enemy long enough to use the shrink ray to restore Turbo, but those few moments are enough for Cy-Kill to get to Thruster and use its weapons to level the apartment building, destroying the ray to keep it out of the Guardians' hands. The Guardians themselves survive—as does Nathan, safely concealed in Turbo's cockpit—and a furious Cy-Kill calls retreat rather than risk facing incoming human reinforcements.

Nathan drops in on John and his other friends, playing marbles in the street, who ask how his clothes got so dirty. As usual, they don't believe him when he tells them he's been fighting with the GoBots... until the Guardians come around the corner to thank Nathan for all his help! After the Guardians leave, Nathan's friends beg him to tell them the whole story, but he can't: he has to get home and clean his battle-trashed room! 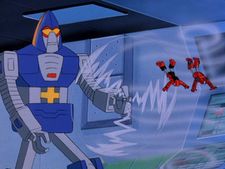 "This pipe is a dead-end!"
"Yeesss, but how do we get them out?"
"We don't have to! We'll just cook them inside!"
"I didn't know you were such an accomplish chef!"
"You don't know everything about me, Crasher!"

—Cy-Kill and Crasher engage in some evil banter 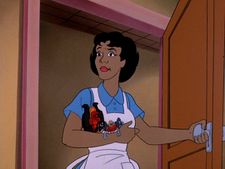 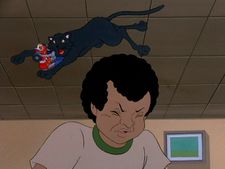 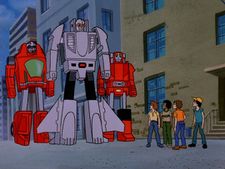