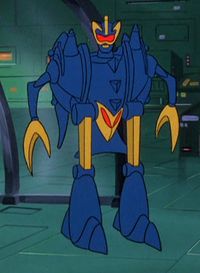 Pincher is a Monster GoBot created by Cy-Kill as liaison to those created by the Master Renegade. 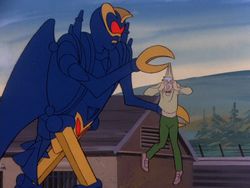 Separating your trash is a 'bot's civic duty!

Seeking to recruit Vamp and Scorp, creations of the Master Renegade, to his side, Cy-Kill directed Doctor Go to create a new Renegade cast in their monstrous image, that he might be "accepted" by the two misshapen Monster GoBots. An unfortunate GoBot who was cut down during the villains' attack on GoBotron was chosen for the role, recreated by the Modifier and rechristened "Pincher" by Go. Flight to Earth Dispatched to Antares III, Pincher met with Vamp and Scorp and successfully convinced them to the join Cy-Kill's forces. The group returned to Roguestar together just as the Guardians launched an attack with their new Power Suits. Despite these new weapons, the Guardians faced a tough challenge from Pincher and his new allies, who used the powerful electron cloud weaponry of their spacecraft to push them to the brink of defeat. Fortunately for the heroes, the three Monster GoBots proved no match for the Last Engineer and his ship Courageous; he outflew the trio's vessel with ease and badly damaged it, forcing them to abandon ship. Courageous and the Power Suits then linked together to form a Power Warrior, with which the Guardians defeated the Renegades and forced them all to retreat. Return to GoBotron 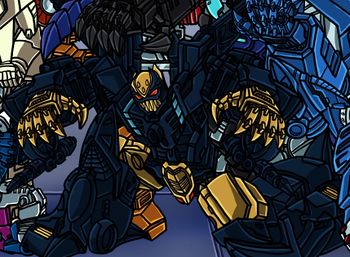 Several GoBots from Gargent 984.08 Alpha escaped the Cataclysm by travelling to Primax 215.19 Epsilon and integrating themselves in with the local Predacons. Ask Vector Prime, 2015/05/14

As they settled in, the Renegades built up a secret base called the Erebos equipped with a Modifier and databanks charting the activities of other GoBots in the multiverse. At some point, they welcomed in a second group of GoBotic refugees: the Monsterous combiner team, and their handler Odd Ball. Unhappy with the stagnant Cybertronian social order, the Renegades began their own plan to overthrow the dominant "Builders" and rule in their place. Cultural Appropriation

During the Grand Uprising, Bladez and Pincher traded the G-Virus to Grimlock in exchange for everything the Resistance knew about the Human Confederacy. Micro-Aggressions

Pincher and the Antares Eight learned of an ancient Terran artifact the Rosetta Stone (renamed "The Stone of Sky Warp") held in the Museum of Decepticon Heritage. They arranged to appropriate the stone, and use it to lure the Terrans to Cybertron. Faking as if they were a Resistance team, the Antares Eight seized control of a trans-hyperwave caster in Proximax. Holding the Builder in charge hostage, they beamed demands for all Builders to leave Proximax in the name of the Resistance. In fact, the transmission was a trap to entice the humans, who monitored all Cybertronian transmissions, with a clear view of the Rosetta Stone in the background. The GoBots intended to use quantumite (a Gargent Cluster substance unknown to the Transformers) to weaponize the caster, snare the unsuspecting humans when they arrived, and take their greater technology.

Pincher and the Monster Gobots faced unexpected resistance, however, from a multi-factional group called the Ex-Bots. They interfered with the seizing of the tower, and were only stopped when Creepy got the drop on one of their members, Stiletto. In a second assault by the Cybertronians, Pincher was dogfighting with the DeathEagle Stiletto when she lured him near the tower. Her partner Snapper fired off in tank mode, throwing Pincher into a spin. Stiletto spun around and finished him off, sending Pincher crashing into the ground in an explosive mess. Cultural Appropriation

Cy-Kill worried that Vamp and Scorp were a bad influence on Pincher and was leery of creating a Monster GoBot block within his force. Renegade Rhetoric (1), 2015/10/16

Pincher temporarily defected to the Master Renegade with the other Monster GoBots, but quickly returned to Cy-Kill once his new leader dropped the ball. Graduation Day

In an alternate reality where Renegades ruled, Pincher was one of the guardians of the Time Portal that allowed Cy-Kill to achieve his victory. Major Mo and a squad of rebels made it past their blockade to undo the damage Cy-Kill did to the timeline. Renegade Victory Part 2

Pincher attacked a UNECOM base on Mercury with Twin Spin and Blades, but they were driven off by the seemingly reformed Doctor Braxis. Once Braxis Twice Shy Part 1

He was also responsible for tracking down the mysterious Renegade Gong to help find the missing Cy-Kill when he was stranded in Axiom Nexus. Opportunity Knocks Part 1

When a Primax and a Gargent universe were tuned together, Pincher was one of several Monster GoBots in the service of the Master Renegade on Antares III. They engaged in the practice of capturing any and all who chanced to land on their planet and throwing them in a pit of Dactyl monsters, though not before giving them a mockery of a trial. Echoes and Fragments 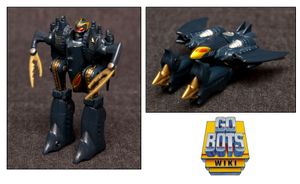 GoBots Pincher transforms from a monstrous robot to a monstrous bat-winged jet-thing. He also features ball-jointed shoulders, a rarity in 1980s robot toys. His neck is susceptible to damage if his jet nose isn't pulled out before being folded down.

Like the other Monster GoBots, Pincher was repurposed from a Machine Robo Devil Invader toy, who served as the sole villains for the original Machine Robo line. Pincher was originally Falgous.

Pincher was released in the second series of GoBots figures in 1984, and was reissued in the third series in 1985 with a holographic sticker.