When a human scientist is lured over to the Renegade side, his son must help the Guardians save GoBotron from the weapon he creates. 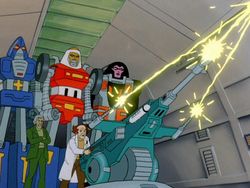 On a UNECOM space station in the remote Omega Quadrant, disgruntled scientist Doctor Mobius toils in obscurity over his inverta-ray. A test of the weapon is interrupted by the doctor's young son Danny, who wants to show off how he has repaired his toy gyroscope, but the plaything winds up falling into the path of the inverta-ray's beam and nearly causes disaster. The angry Mobius orders Danny out of the lab, so to cheer himself up, the boy sneaks into one of the station's flight pods and goes flying outside, pretending he is Leader-1 fighting Renegades. Much to Danny's surprise, his game suddenly becomes reality when the Renegades' Thruster appears and opens fire on the space station. By good fortune, Leader-1 and his team arrive in their Command Center soon after; they were already on their way to the station to drop off Scratch, a rookie Guardian whose first duty was to work security there. As battle rages between the two forces, Cy-Kill and Doctor Braxis board the station, where they invite Mobius—an old colleague of Braxis's—to come with them, promising him a chance to prove his intellect to the world. Though reluctant to leave his son, Mobius agrees on the condition the Renegades will stop their attack. Naturally, of course, they "stop" their attack by knocking the space station out of orbit, forcing Leader-1 and the Command Center to use tractor beams to save it while the villains make their getaway. Danny asks to accompany the Guardians in pursuing them, but they tell him to remain on the station. 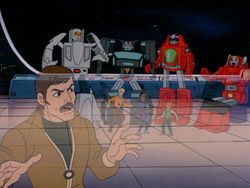 Mobius demonstrates the test model of his inverta-ray for the Renegades, explaining that it implodes planets by reversing the polarity of their cores. The Renegades propose building a full-size working model, and Mobius agrees, but tells them he will require a large supply of the ray's power source, plutocite, an element found only on Pluto. The Renegades waste no time in heading for Pluto, and Astro-Beam in Screw Head to help them dig. The Guardians are hot on their trail, but as they approach the ice planet, they discover that Danny has stowed away aboard the Command Center—not that Mobius has any idea of this when he follows Cy-Kill's order to blast the Command Center with the inverta-ray. The Renegades watch in glee over a video monitor as the ray causes all aboard to start fading out of existence, but when Mobius sees his son, he immediately shuts the weapon off. Crasher is furious and nearly squashes Mobius, but Cy-Kill stops her. The Guardians disembark the Command Center and a battle soon kicks off on the surface of Pluto, but when Crasher is injured by Turbo, Cy-Kill decides to call retreat. The Guardians block the villains' way, but Cy-Kill grabs Mobius and threatens to rip him limb from limb if they do not let the Renegades pass. Left with no choice, Leader-1 must allow Cy-Kill and his goons to depart with the plutocite they need. 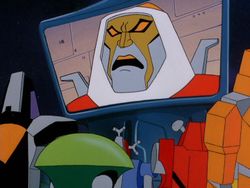 Cy-Kill imprisons Mobius in a forcefield aboard Thruster as the Renegades relocate to a planetoid close to GoBotron, where Braxis uses a mind-scan to pluck the secrets of the inverta-ray from Mobius's mind so that he can build the full-scale version for Cy-Kill. The Renegade leader broadcasts an ultimatum to GoBotron, demanding that he be named "overlord" of the GoBots' homeworld within two hours, or he will destroy the planet! Zeemon sends a message to Leader-1 calling for his help, but grimly tells the Guardian Council that they must be willing to surrender in order to save the planet if aid does not arrive in time. 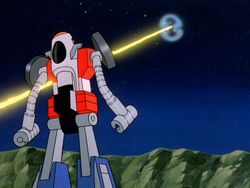 A.J. puts Danny to bed as the Command Center heads for GoBotron, but Danny is determined to save his father himself. Once the Command Center has emerged from hyperspace, he steals a pod and jets off to look for his dad, using his radar watch to track him and the Renegades down. As soon as he lands on the planetoid, however, he is captured by the Renegades and thrown in the forcefield cell with his father. The Guardians arrive soon after and battle breaks out; during the mayhem, Braxis activates the inverta-ray, but Scooter buys GoBotron precious moments by projecting of a hologram of the planet, at which Braxis mistakenly fires. By the time Braxis has been alerted to his mistake by Cy-Kill and opened fire on the real GoBotron, Mobius has managed to re-wire Danny's radar watch to disrupt a small area of the forcefield, allowing Danny to slip out. Cy-Kill stops the boy before he can deactivate the inverta-ray, but as Danny backs away from the looming figure of the Renegade, he bumps the Astro-Beam, accidentally triggering it. The Astro-Beam teleports Cy-Kill and Braxis to GoBotron, forcing Cy-Kill to radio Crasher and Cop-Tur and instruct them to come and rescue them both before the planet is destroyed.

As the Renegades pull out, Danny deactivates the forcefield and frees his father. Unfortunately, Mobius discovers that Cy-Kill has broken the inverta-ray controls, leaving him unable to deactivate it—and worse yet, the Guardians' blasts cannot penetrate the machine's self-generated protective field! Recalling the earlier accident in the laboratory, Danny produces his gyroscope and tosses it into the path of the ray, disrupting the machine and causing it to explode. GoBotron is saved (and Cy-Kill and Braxis with it!), and the repentant Mobius thanks his son for saving his life and dedicates his work to stopping the Renegades in the future. 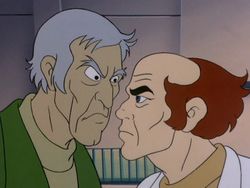 "The inverta-ray reverses the polarity of the core of a planet, causing the planet to implode."
"Hmph! That's not so impressive!"
"Well, you didn't think of it!"
"Well, I could have!"

"Be ready in two hours or I'll let Crasher have her way with you!" 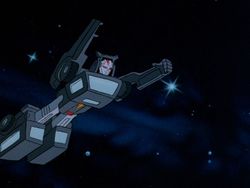 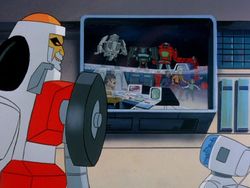 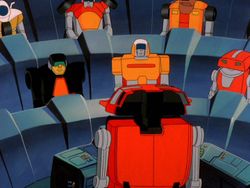 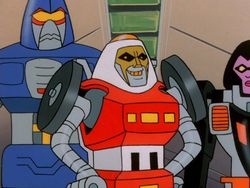