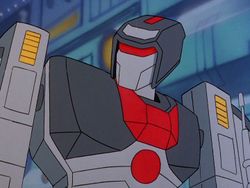 Pray for a true peace in space!

Path Finder is a friendly robot space ship who frequently fights with Leader-1 and his Guardians during their missions on Earth.

She is a good friend of the human scientist, A.J. Foster. 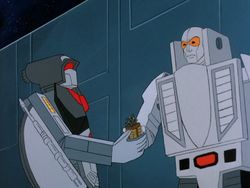 While relating the events that led up to his run for President of the United States, Cy-Kill recalled Sky-Jack avoiding detection by a Guardian while tapping into Earth's satellite broadcasts. He could not recall, however, if the Guardian was Path Finder, Spay-C, or Apollo. Cy-Kill For President

Path Finder and Guide Star were guarding a UNECOM outpost on Mercury when they were attacked by Renegades. Remarkably, they were saved by the arrival of Zebediah Braxis, Ph.d, and his new Destabilizer Cannon. Once Braxis Twice Shy Part 1 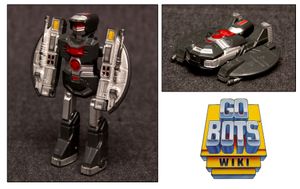 Path Finder transforms from robot to space ship, featuring die-cast metal and chrome parts. She was released in the first series of GoBots figures in 1983, then re-released as part of the second series in 1984 with a hologram sticker.

She can roll freely on several wheels under her alternate mode, but this tends to cause damage to the silver paint on her arms.

Path Finder is a straight import of the Machine Robo UFO Robo toy.

As the first figure sold after the shift to Tonka-based titles, Pathfinder retained both her GoBots name (minus the space) and faction. She was repackaged and released by Bandai Australia on a black backing card depicting a yellow-tinted alien landscape.

Path Finder is a redeco of the Transformers Mini Vehicle Cosmos toy, transforming into a flying saucer based on George Adamski's "eyewitness" designs of "real" flying saucers. She was only available in the Japanese e-HOBBY exclusive Collector's Edition "G1 GoBots" six-pack with Bad Boy, Bug Bite, Road Ranger, Small Foot, and Treds.