The GoBots meet an alien with vast powers who is tricked into attacking the Guardians. No, not that one. No, that one either. No... 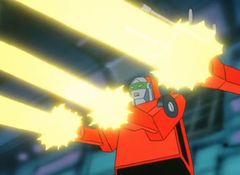 Professor Von Joy and Sparky are preparing the new Element X on the Guardian Space Lab. It will power a new Transmuter that is designed to finally nullify the Renegades' stealth technology. It seems to be interfered with by what the Professor assumes is debris but is actually Thruster, and Crasher gets into the lab, trashing the place. Leader-1 reports the lab's destruction to Turbo, Scooter, Small Foot, Van Guard, Rest-Q and Path Finder; he is just announcing the loss of Sparky and the Professor when they appear, battered but alive, and collapse - having self-destructed the lab to prevent it falling into Renegade hands. Sparky meanwhile was able to save Element X from destruction. Leader-1 decides the next tests should be done at UNECOM's secret laboratory. Small Foot then arrives, telling Leader-1 she has detected a coded Renegade message from inside Guardian Headquarters. He announces a plan to get the Element to Earth undetected, unaware that the bug is right next to him. Leader-1 takes a decoy Command Center while the Element is really being transported by Turbo, Scooter and Small Foot. However, Thruster attacks the Earthbound ship, trapping it in a forcefield. Cy-Kill demands they surrender the Element. Scooter is able to pilot the Command Center away while Crasher and Cop-Tur squabble and then clumsily shoot the Guardian ship down, forcing it into re-entry, leaving Cy-Kill furious at the potential loss of the Element. 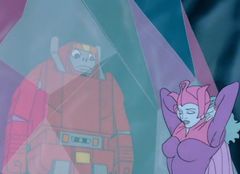 We're on her side already.

Turbo is able to bring the damaged ship down for a crash landing on an island - which is actually the location of the secret UNECOM facility. Cy-Kill orders the Renegades to investigate the crash in case the Element survived; when Thruster arrives Turbo orders Scooter and Small Foot to get the Element to safety while he holds them off. However, Crasher chases the pair until Scooter projects an image of a tunnel onto a nearby rock, tricking her into driving into very solid rock while they escape to a real cave. The Renegades then catch Turbo as he sends a distress signal to Leader-1. Meanwhile Scooter and Small Foot seem to have gone into the wrong cave and his sensors pick up a life form before they hear a voice calling. Against Scooter's wishes Small Foot decides they should investigate and they find someone professing to be Astral, Princess of the Lost Planet of Crylos[1], imprisoned in a crystal. She begs for help but when Scooter goes closer Astral switches places with him, leaving the Guardian trapped. She flies off on an apparent quest and throws Small Foot's energy blasts back at them when the GoBot tries to stop her. Cy-Kill is about to put Turbo through the Brainstormer when Astral is spotted by Cop-Tur. Recognising her as powerful, Cy-Kill sends Crasher to capture the Princess. The Renegade's attacks however seem to charge Astral, and she hurls Crasher off into the sky. Cop-Tur then steps up but she turns his rotor attack against him, further impressing Cy-Kill, who offers to help Astral in her quest. She is looking for a rare mineral called crylinium[2] and he tells her all known reserves are being held by the evil Guardians. 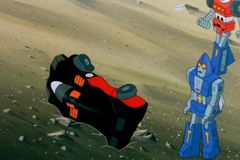 Leader-1, Sparky and Professor Von Joy track the signal in the other Command Center, finding a battered Turbo, who tells them Cy-Kill used the Brainstormer on him. Leader-1 sets off to stop him, leaving the other two to fix Turbo. Meanwhile Astral is leading the attack on the base, manned by Matt, Nick and A.J.. Leader-1 arrives just as the base's defences are knocked offline. He knocks out Cop-Tur but is then held in mid-air by Astral. He tries to convince her that he is not her enemy and UNECOM have no crylinium but she doesn't listen. Small Foot arrives to help and Leader-1 takes a shot aimed at her; when Small Foot then tries to protect her injured companion Astral realises the Guardians are compassionate and she has been deceived. As Leader-1 fills her in on the Renegades, Cy-Kill opens fire on them but she redirects the attack to Thruster. Astral then releases Scooter, returning to the crystal herself, and revealing the rest of her people are kept on Earth in suspended animation due to the planet's lack of crylinium, waiting until the planet's sun was old enough to produce it. The sun is still too young but Professor Von Joy realises Element X will work as a crylinium substitute. Astral is then able to take her people from Earth, telling the Guardians she will always be their friend. The Professor however mourns the setback to his anti-stealth research; Cy-Kill tries to frame this as a Renegade victory, but a battered Cop-Tur is not so sure. 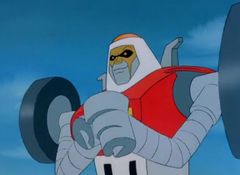 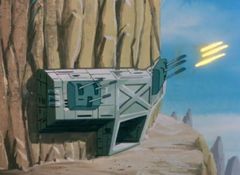