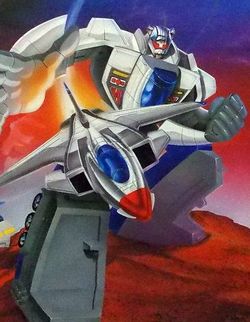 Chaos is a Renegade, one of the Dread Launchers. Jet-propelled and armed for action, Chaos creates chaos in the skies!

Along with Re-Volt and Traitor, Chaos went undercover as one Red Team of Guardian cadets as part of Cy-Kill's plans to abduct and Brainstorm Zeemon. They needled at the competing Blue Team of Tork, Twister, Staks and Tri-Trak, and outperforming them on many of the tests due to the latter's impetuous behaviour. The trio then came up with an excuse to get away from the rest near Saturn, reporting in to Cy-Kill about a newly discovered weakness in Thruster's deflector shield. To keep the Blue Team busy an attack was staged by Vamp, Scorp and Creepy. They returned in time to "chase" the Renegades off, but Tri-Trak became suspicious of them, especially after they rigged an "accident" to void his firing range test. In the meantime Chaos logged the fifth best score of the seven cadets, graduating successfully. However, Tri-Trak caught Re-Volt and Chaos setting up the Astrobeam to kidnap Zeemon the next day, but he was found and knocked out by Traitor. The trio strung the Guardian cadet up in the firing range before attending the ceremony. He was put through the Modifier before the trio successfully kidnapped Zeemon after a struggle and escaped despite the freed Tri-Trak's efforts to stop them. However, Tri-Trak didn't give up and this inspired the rest of Blue Team to give chase. The kidnapping was ultimately foiled when Tri-Trak flew through the cabin of their Thruster; Chaos was then captured along with his team-mates. Guardian Academy 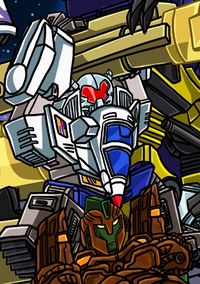 During the Diaspora, Chaos was dispatched to Level 39 along with an assortment of GoBots, including the Secret Riders and Dread Launchers. Cultural Appropriation

When Cy-Kill ran for President of the United States, the Renegades began their own version of the "Get Out the Vote!" campaign. Chaos sought a kinship between his vehicle mode and the Grumman factory workers of New York, but when he physically assaulted them it cost Cy-Kill some votes. Cy-Kill For President Chaos was one of the loyal troops who, along with Crasher and Fitor, freed Cy-Kill when the Master Renegade and some rogues created Renegade Power Suits and the combiner Grungy. Coup de Grunge Cy-Kill described the punctilious Chaos and the Dread Launchers to his audience while ruling the airwaves on Axiom Nexus. Renegade Rhetoric, 2015/10/17

For their own amusement, Sideways and Gong played with reality so that elements of a GoBots universe blended in and out of a Transformers universe. In this mingled reality, the Renegades lay siege to Autobot City on Earth. Blaster and Perceptor attempted to radio for help to Optimus Prime on Cybertron's Moonbase One, but Cy-Kill spotted them. He and Dr. Go dispatched Chaos and the Dread Launchers to jam the transmission. They destroyed the antenna, but were intercepted by Blaster's Recordabots before they could reach the broadcaster himself. Echoes and Fragments 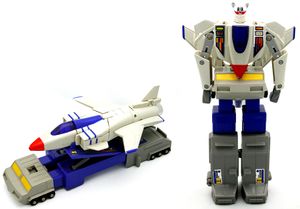 Chaos was released by Tonka in the third series of GoBots, and converts from robot to two separate vehicles - his top half becomes a Grumman X-29 experimental jet fighter, and his bottom half becomes a mobile transport-and-launching truck that can carry the jet if desired. A character biography was printed on the back of the box. Chaos wins the prize for being the Dread Launcher combo that makes the most sense; he is also the only one to feature even one of his modules to be based on a real-life vehicle. While the robot has articulation at the shoulders, elbows and wrists it's all only parallel to the body, though Chaos can do decent monkey gestures. The figure was designed by Bandai on behalf of Tonka; as such, Chaos was never released in Japan.

Chaos was identical to his American release, aside from that his name was swapped with that of Re-Volt for reasons unknown.