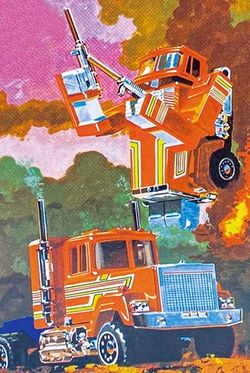 Staks is a Guardian. He might have a truck cab for a head and no hands but he's always willing to use his twin laser guns to help as best he can.

Staks was one of the Guardians tasked with assaulting the Renegade Fortress on GoBotron, narrowly avoiding return fire from its' defences. Battle for GoBotron Later he used his lasers to cut open a blast door, kicking it in so he, Path Finder and Hans-Cuff could get past.Earthbound During Cy-Kill and the Master Renegade's invasion of GoBotron he was damaged in battle, getting stretchered into Rest-Q's makeshift field hospital by Small Foot and Van Guard. The Fall of GoBotron 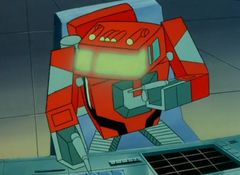 He was serving on GoBotron when news that Nywilak's sun was about to go nova, passing the message along to Zeemon. Nova Beam Along with Wrong Way, Staks was assigned to guard Industrial Moon Zeta Three. However, when the Renegades arrived with their new ally Alva-Nar and his powerful fleet of ships the pair quickly realised they were out-gunned and retreated - though Staks had to give his colleague some directional assistance as they did so.Renegade Alliance Staks later served on Earth, using his firepower to buy the Guardians' time against the Renegades' Puzzler, a giant drone combiner forged by Cy-Kill as a counter-weapon to the Power Warrior Courageous, before donning a Power Suit and helping destroy the robot as part of Courageous. Auto Madic Staks briefly served on the Guardian Council with Zeemon, Dozer, Path Finder, Scratch, Rest-Q and Road Ranger but the group were taken hostage by Leader-1 and Turbo, who were under the control of Buddy's spectrometer. The group were saved from delivery to the Renegades by the timely intervention of Scooter, Nick and Buddy. Whiz Kid Staks would later join Sparky in running a cargo of surveillance equipment to Earth, but when the Renegades' stealth devices were able to get them close to the convoy without the pair noticing they were forced to jettison their cargo in order to avoid destruction. Braxis Gone Bonkers Staks was later present with the Guardian security detail on GoBotron to detain Fitor after he was captured. Fitor to the Finish

No explanation is given for why Staks was suddenly a Guardian cadet when he had previously been an active Guardian since the pilot. He does not reappear with the Secret Riders.

Despite being shown with the Enemy faction in the mini comic, Staks was only issued as a Friendly in the Machine Men toyline. 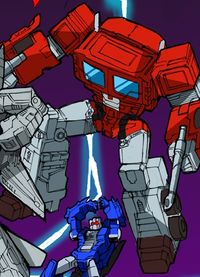 During the Diaspora, Staks was dispatched to Level 39 along with an assortment of Guardians and Renegades. Cultural Appropriation

In a vision, Small Foot saw several of her comrades, including Staks, in new Cybertronian-style bodies and under threat by Unicron. High Noon

Staks and Pumper pulled guard duty at a global summit on pollution when it was attacked by Zero and the Master Renegade. They were blasted into submission by the villains, who made off with a special kind of algae on display. Trash and Treachery Staks and Dart were manning a Guardian mining outpost near a black hole when Cy-Kill attacked, determined to lure Leader-1 into a trap. Trouble at 20,000 Light Years At UNECOM, Staks was one of the Guardians attacked by the Renegades when they attempted to steal the Scootonium supply. The Scootonium Scenario In Axiom Nexus, Cy-Kill couldn't recall who the last member of the Secret Riders was. He thought it might be Staks for a moment, but dismissed the idea since Staks was a veteran Guardian by that point. Renegade Rhetoric 2016/10/17

As Sideways and Gong played with mingling universal streams, a battle took place at Guardian City on Earth between the Guardians and the Decepticons. Staks arrived from Moonbase One along with Leader-1 and more reinforcements. He joined Scratch, Bolt, and Dozer in the Power Suits to form Courageous and battle the mighty Devastator. Echoes and Fragments

Staks was one of the giant Go-Bots which were forgotten about on GoBotron while Leader-1 and Cy-Kill battled. He was later found by Road Ranger and helped him build a team that would save the planet from the threat of the Vamp army controlled by Braxis. Issue 5 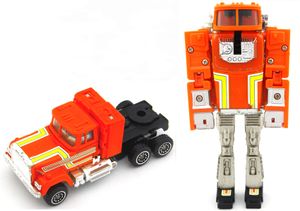 Staks was released by Tonka in the second series of GoBots, and converts from robot to Peterbilt 352H long-nosed semi-cab in 10 steps. The toy was a recolour of Big Trailer Robo from Machine Robo, with a new orange colour scheme with yellow trim stickers. For the Super GoBots release only the cab was issued; the trailer was only included in the concurrently-released Staks Transport set (see below). The truck mode's smokestacks become the robot's pipe-guns, and can be held in either hand. While Staks has good articulation at the shoulders and elbows all these parts can sadly work loose over time. Several variations of Staks were issued - one featured black plastic feet and truck backplate, the other blue; similarly standard and shortened versions of his smokestack guns were issued, with no clear pattern as to which came with which. 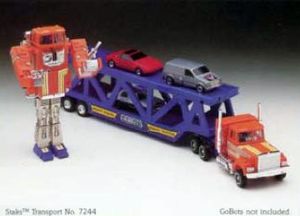 A second release of the previous Staks toy, this version comes boxed with the same transport trailer included with the Japanese release of Big Trailer Robo. The trailer can carry up to five regular sized GoBots vehicles; the rear gate can open and depressing the buttons on either side means the top level can tilt down like a real transport trailer. Both blue and black feet versions were released as part of the set, while the trailer also had two variations - one with black plastic floors, the other blue. Good luck collecting all the possible combinations, Staks fans! Staks Transport was later recoloured as Thunderer for Machine Robo: Battle Hackers.

The European release of Staks used only the black feet/backplate and long smokestacks for its' release. While the box art clearly depicting the Japanese colours the Robo Machine release used the same orange scheme as the American release. On the figure's instructions and some catalogues the character's name is changed to Stacks.

The European version of the Staks Transport set was the same as the American release, apart from only featuring the black parts and full-length smokestacks.

The Australian version of Staks was identical to the European release.

While the Australian release of the Staks Transport set featured the same cab as the Super Machine Men release with the trailer of the American version it was notable for being packaged with a quartet of extra figures - exclusive recolour versions of Hans-Cuff, Rest-Q, BuggyMan and Turbo. As a running change, Hans-Cuff was later replaced by an unchanged version of Fitor.