With the world against them and Leader-1 captured by the Renegades, Turbo and Scooter go on the run. 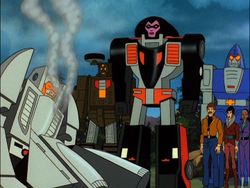 Cy-Kill stops Crasher from delivering the killing blow to Leader-1 and orders her to bring him back to Cheyenne Mountain. By Cy-Kill's side, Doctor Braxis gloats over their victory, imagining everything he can do with the whole world under his control—whereupon Cy-Kill reminds him that humanity is under Renegade control, and that he will require all of them for his plan to conquer GoBotron. Braxis tries to bargain for ownership of California in the meantime, but Cy-Kill quickly silences him by threatening to remove the frequency neutralizer that protects him from the pulsar generator's mind-controlling effect. As Crasher returns with Leader-1, the effects of the Astrobeam wear off and Geeper-Creeper is teleported back to GoBotron to share news of the Renegade victory, while Cy-Kill begins plotting to use his human thralls to track down Turbo and Scooter. 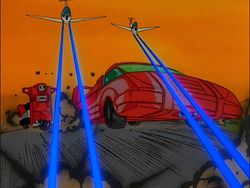 Weeks later, Turbo and Scooter are pursued to the small rural town of Peaceful Hills by mind-controlled human police and military. When they take refuge in a cornfield, they find themselves on a collision course with a combine harvester, but Turbo plays chicken with the machine's human driver and emerges triumphant, crashing into it and shattering its blades with his powerful GoBot body. Finally, Scooter uses his hologram powers to disguise them both as a haystack, leaving the police to speed away in search of them. The two hide in a nearby barn to recuperate, but soon, they receive a communication from Crasher transmitted over their internal frequencies. She and Cop-Tur have arrived in the area with Nick and A.J., and will kill the two humans if the Guardians do not show themselves!

Seconds before Crasher's ultimatum expires, Cy-Kill drives up with news of a spaceship landing nearby. Suspecting more Guardians have arrived, he takes custody of the kids and sends Crasher, Cop-Tur, and the police to investigate... but once the villains have left, Turbo appears and "Cy-Kill" reveals himself to be Scooter in a holographic disguise! Still under Renegade control, Nick and A.J. attempt to run away, but Turbo grabs them and bundles them into his cockpit. He and Scooter relocate to New York, which Scooter has detected is completely devoid of any human presence, in hopes of finding some equipment to break Cy-Kill's control over their friends, but their arrival is spotted by a patrol plane. 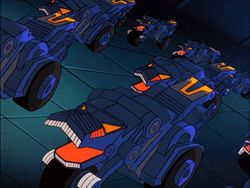 What If Zod Was One Of Us?

Back at Cheyenne Mountain, Cy-Kill lambasts Cop-Tur and Crasher for falling for Scooter's deception. The immobilised Leader-1 takes solace in knowing his friends are still on the loose, but Cy-Kill tries to quash his optimism by revealing the full extent of his master plan. All across the world, humans have been directed to leave their cities behind to labour in factories building the Renegades' ultimate weapon: an entire armada of Zods that Cy-Kill will unleash upon GoBotron! As Cy-Kill and Braxis use the mind-reading Brainstormer to pluck information about Guardian bases on GoBotron for the Zods to target, General Lindley arrives to report the sighting of Scooter and Turbo in New York. Cy-Kill calls in the big guns, using the Astrobeam to teleport the towering Tank in from GoBotron, and charges him and Cop-Tur with obliterating the two Guardians. 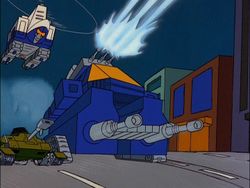 The Renegade forces—including human choppers and tanks, as well as Zod himself—roll into New York just as Scooter completes construction of neutralizers to free Nick and A.J. from the mind control. With their friends back on their side, they try to escape through the city streets, cornered at every turn by their enemies. Turbo manages to shoot down a chopper piloted by Matt, who the group takes with them as they take cover in a nearby subway. Tank fires after them, collapsing the tunnels and leaving the Renegades confident that their quarry has been exterminated... unaware that the group have survived, and have provided Matt with a neutralizer to restore him to normal.

Across the galaxy, back on GoBotron, the Guardian forces led by Path Finder continue to lay siege to the Renegade Fortress. Just as Staks lasers a path through the fortress walls for the Guardians, Tank teleports back in to the control room, where he informs the worried Fitor that even if they lose this battle, Cy-Kill will soon win the war. 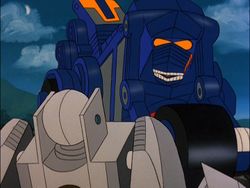 If the zoo bans me for hollering at the animals, I will face Zod and walk backwards into hell.

Having successfully pillaged Leader-1's mind of the secrets he requires, Cy-Kill takes his old enemy aboard the captured Command Center to visit an army base where one squadron of Zods is being readied, wanting to examine his doomsday weapons first-hand. As luck would have it, Turbo, Scooter, and their human allies have located the same base. Upon spotting Anya Turgenova among the humans present, Turbo and Matt decide to stage a rescue attempt, simultaneously creating a distraction that will allow Scooter and the kids to retake the Command Center. They succeed in grabbing Anya, but the distraction doesn't last long enough; determined to be ready for the attack on GoBotron, Cy-Kill breaks off the fight and returns to the Command Center, forcing Scooter, Nick, and A.J.—who have been delayed in their mission by finding the captive Leader-1 aboard—to hide. Cy-Kill flies the Command Center to a junkyard where the original Zod is enjoying a meal of wrecked cars and other scrap metal... then throws a lever that opens the bottom of Leader-1's cell, sending him plummeting down to join the rest of Zod's dinner! 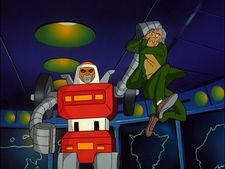 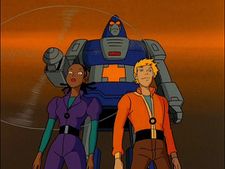 "I will need all your planet's manpower to help me in my quest to conquer GoBotron!"
"Yes, but Cy-Kill, there are so many people... couldn't you give me, say... California, for now? Just to play around with?"

"Good to see you again, Crasher! I missed your... charming laugh."

"I'll give you five minutes to follow this signal and surrender yourselves, otherwise you'll never see them again. At least, not in one piece... you know how careless Cop-Tur can be when his blades are spinning."

—Crasher threatens Nick and A.J.'s lives to flush out Turbo and Scooter

"These guys are startin' to give me indigestion!"

—Turbo suffers tummy troubles thanks to the mind-controlled Nick and A.J.

"Amazing what these humans can do when they're of one mind... my mind." 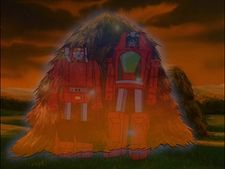 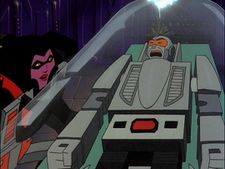 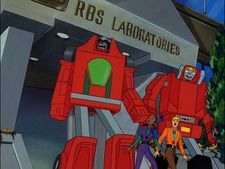