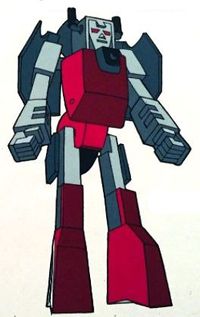 After the Cataclysm that ravaged Old GoBotron and caused the GoBeings to become GoBots, the planet came under the supervision of three High Protectors, the Guardians Zeemon, Leader-1, and Cy-Kill. Dart was a member of the Guardians who partnered with Cy-Kill and Bullseye. During a raid on a Renegade terrorist base, Dart was shot down while Cy-Kill was injured and nearly killed by Zero. However, Dart recovered and managed to get him to safety. Each of the High Protectors had been assigned a mission, but only Leader-1 carried his out successfully. Factions within the Guardians began to denigrate Cy-Kill and champion Leader-1 as the sole High Protector. A bitter Cy-Kill began to recruit from within the Guardians to overthrow his rivals, bringing Dart and Fitor in on the conspiracy, which involved freeing the Renegade criminals Crasher and Cop-Tur. An assassination attempt on Leader-1 by Cy-Kill's new Renegade allies failed, and the traitors in the Guardian ranks were exposed. Dart abandoned the Guardians along with Cy-Kill and the others to join the Renegades. "Et Tu, Cy-Kill"

Much time passed, and Dart somehow found himself on Level 17 of Old GoBotron. He had forgotten most of his past, and was held with the other GoBots of Level 17 under the tyrannical rule of Gunnyr and Bug Bite. These GoBots used Brain Drain technology to wipe the memory of their people to keep them compliant. They also removed the GoBots' knowledge of traditional GoBotic abilities, stylizing themselves as gods because they retained the powers of flight and conversion. Despite what Gunnyr's doctrine said, however, Dart believed there was a world outside of Level 17. He journeyed to the edge of the Forbidden Zone and managed to catch glimpses of other GoBots flying around GoBotron's modern edifices. Dart attempted to contact the topworlders, and his signal brought Scooter down to Level 17. Unfortunately, Gunnyr and Bug Bite captured the Guardian. When Leader-1 and Turbo came looking for Scooter, Dart helped them evade capture and told the Guardians what he knew. Eventually, the trio joined Scooter and his new friend Ace in bringing down Gunnyr's rule, and restoring conversion power to the GoBots of Level 17. Dart and Ace were then added to the ranks of the Guardians, and were put through the Modifier, allowing Dart to show off his new motorcycle transformation. The GoBots That Time Forgot

Dart was later the pilot of Command Center 3, towing huge slabs of metal to GoBotron along with Turbo and Bolt as part of the ongoing repairs to the planet. However, the convoy was targeted by the Renegades, with Sky-Jack and Gunnyr attacking the convoy, drawing away escorts Leader-1 and Ace. His ship was then attacked by Renegade Thrusters and set on fire, while Cop-Tur send the huge sheets of material cascading down towards the planet below. This was unfortunate as GoBotolis' defences were wired through Dart's control console, initially leading to considerable damage and casualties on the ground. Thankfully Ace was able to board the Command Center and belatedly activate the system while also getting Dart to safety.Mission: GoBotron 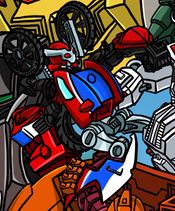 During the Diaspora, Dart was dispatched to Level 51 along with an assortment of Guardians and evil Rock Lords. Cultural Appropriation

In Axiom Nexus, Cy-Kill recalled Dart's complicated history to his attentive audience. He laid out how Dart was a Guardian who saw the light and at first joined the Renegade cause with Cy-Kill and Fitor. However, he later fell under Gunnyr's sway down in Old Gobotron, which soured him to the cause. This led Dart to rejoin the Guardians after Gunnyr was dethroned. Renegade Rhetoric 2015/10/15 Cy-Kill also remarked on how Gunnyr was imprisoned on the Prison Moon of Gobotron by Ace and Dart as they joined the Guardians. Renegade Rhetoric 2015/10/19 Dart and Staks came under fire by Renegades at a remote Guardian mining outpost. Trouble at 20,000 Light Years

In an unstable hybrid universe that incorporated both GoBots and Transformers, Dart was aboard a Guardian shuttle bound for Earth when Megatron attacked and hijacked the ship. The Decepticons executed him while seizing the ship. Dart only suffered this fate retroactively due to the machinations of Sideways and Gong. When the events actually took place in this hybrid timeline, it was an Autobot crew who were attacked by Renegades.) Echoes and Fragments 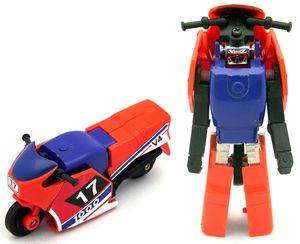 Dart was released by Tonka in the third series of GoBots, and converts from robot to Honda VF1000R racing motorcycle in 9 steps. Initially designed by Bandai for the Machine Robo line, the figure was unreleased until the prototype was used by Tonka. As such, the figure was never released in Japan. Dart is sadly plagued by design flaws - the front halves of the bike fairing just hang there in robot mode, fouling the arms; the head doesn't clip in well and because of the weight balance tends to tilt forward and the legs barely move far enough apart to allow the robot to balance. Finally Dart is covered with paper-based stickers which are a magnet for wear. 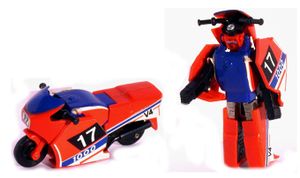 The European release of Dart featured slight changes from the American release; the chromed face of the GoBots version was dropped for red plastic with a painted visor while even more stickers were added - on the fuel tank, where the very act of converting Dart causes them to scratch and peel.