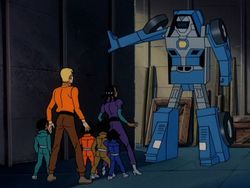 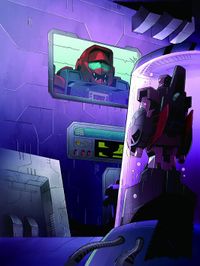 Cy-Kill considered BuggyMan a solid officer among the Renegades. He takes the initiative and shows good judgment in the field. Cy-Kill often employed BuggyMan as a subcommander captaining his own Thruster during assaults. Renegade Rhetoric 2016/10/17

When the Guardians and UNECOM began working on the Space Hawk project, Cy-Kill dispatched BuggyMan to kidnap Anya Turgenova so the Renegades could Brainstorm her for the project's secrets. The Hawks of Space Part 1

BuggyMan and Crasher joined Cy-Kill in pursuit of the Master Renegade's minion, Creepy. They disabled his ship, the Dromon, and boarded it to capture the Monster GoBot. Just as the Guardians intercepted Cy-Kill's crew aboard the craft, however, they were all teleported to the other side of the galaxy by a group known as the Overseers. The GoBots were enslaved by the Overseers and affixed with special cuffs that disabled their power packs and conversion abilities. A bizarre side effect was the change to the color of their superstructures, with BuggyMan becoming an eye-popping orange.

BuggyMan and Leader-1 were assigned to work in the recycling center. Leader-1 fashioned a key from the scrap to free himself and BuggyMan, and together they collected Creepy and the other Guardians and Renegades for an alliance of convenience. The GoBots were confronted by A.N.Ubi.S., the Overseer's ultimate weapon, but they managed to defeat it. Cy-Kill forced the Overseers to use their matter-superposition ray to send the GoBots home, and the parties went their separate ways once they returned. Chains of Doom

While on Axiom Nexus, musing how to integrate his new Renegades into the old guard, Cy-Kill considered BuggyMan a good and stable new partner for the obsessive Clutch. Renegade Rhetoric 2016/10/16

The Master Renegade had created a second set of Power Suits for the Renegades, but abandoned them and escaped with the ship necessary to form the Power Warrior, Grungy. Nevertheless, Doctor Go was able to recreate the central component, forming a tank unit called Nemesis. BuggyMan, Decker Decker, Block Head, and Loco used the Power Suits at Cy-Kill's direction to amplify their powers, and Cy-Kill himself controlled the tank module when they all linked up to form Nemesis.

Seeing an opportunity to disrupt the tri-planet alliance treaty being held on Quartex, Cy-Kill and the Renegades joined forces with Magmar to attack UNECOM, the Guardians, and Boulder's Rock Lords. The battle initially seemed evenly matched as Cy-Kill pitted Puzzler and Monsterous against the Power Warrior Courageous and the Fossil Lord's Fossilsaurus. He held BuggyMan and cohorts in reserve, however, unleashing his third combiner Nemesis at a key moment in the battle. The tide turned in favor of the Renegades, and Nemesis captured Leader-1 and Boulder. Combiner Wars Part 1

Unfortunately, the Guardians and humans used teamwork and Cy-Kill's own ego to drive a rift between him and his allies. The captives were rescued, and a united heroic effort was prepared for the Combiners now. BuggyMan and Nemesis were defeated, and Cy-Kill was seemingly lost forever as he plunged into boiling lava. Combiner Wars Part 2 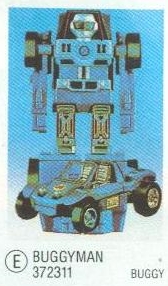 A repackaging of the Machine Robo Buggy Robo figure, BuggyMan converts from robot to a blue beach buggy patterned after a Meyer Manx. 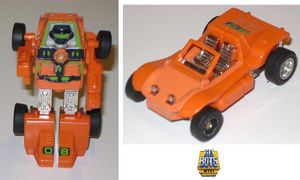 The first toy from the second wave of figures, Buggy Man was released by Bandai Australia in 1983. He remained identical to the original Buggy Robo toy, albeit packaged on a blue backing card.

A carded repackage of Buggy Robo, the figure now simply known as Buggy was released by Bandai Europe at the end of of 1983. It was also the first new figure in the second wave to be packaged on a new blue and purple backing card.

Produced by Monogram, this BuggyMan kit comes closer to replicating the original toy than any of his wave mates.