The Renegades and Guardians have an adventure in ancient Rome. 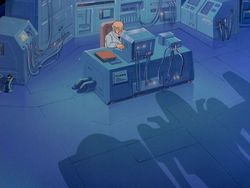 There are no tricks in plain and simple faith.

In deep space, Crasher and Cy-Kill spy on a human scientist, Professor Ling, introducing UNECOM to his Chronos Time Transporter – a machine that can transport matter to any time and place on Earth - which is to be tested shortly by Matt Hunter and his Guardian allies. But Cy-Kill chuckles that it won't be Guardians traveling through time – it will be Renegades! 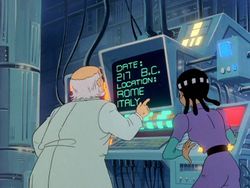 Beware the ides of March.

Meanwhile, BuggyMan Astrobeams himself to Earth, enacting Cy-Kill's plan to distract the Guardians by destroying a dam. It works, and the Renegades infiltrate the lab. Ling, who hasn't been paying attention, mistakes them for the UNECOM research team. He gives them three control sensors that can bring them back to the present. Cy-Kill requests to visit the recent past, his plan being to slaughter the Guardians' human allies as children (!). Ling enters the coordinates of Aug. 1, 1971, Tucson, Arizona, into the console, warning the Renegades not to interfere with the past. But just as the machine is about to activate, the Guardians arrive. A fight begins, ending with Scooter crashing into the transporter's control console – activating it and changing the date and location to 217 B.C., Rome, Italy!

Things quickly go downhill as a group of Roman Centurions and barbarians mistake the Renegades for gods. Leader-1 leaves A.J. and Path Finder in the present, while he, Turbo, Scooter, Nick, and Matt travel to 217 B.C. to stop Cy-Kill. When they arrive, the newly founded Roman-Renegade alliance chases the Guardians into a canyon. The Guardians are quickly defeated by some falling rocks. As Cy-Kill starts to dig them out, Matt and Nick escape into a nearby cave. The General Commodus shows up and requests to parade the defeated Guardians before the Emperor Maximus. 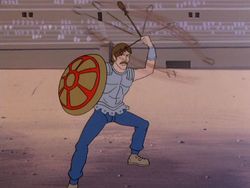 As I love the name of honour more than I fear death.

Somewhere in Rome, the Guardians are led in shackles before a crowd of jeering Romans. Cy-Kill tells Crasher that he now intends to rule the world by becoming emperor of Rome. Matt and Nick sneak through the crowd, but are quickly seized by guards who notice they aren't dressed like Romans. They are turned over to a sympathetic blacksmith, Marcus, and told they will be forced to fight in the arena. Though the emperor is reluctant, they are soon released into the arena, where they must do battle with a gladiator and two panthers. Matt and Nick manage to defeat the warrior and his feline allies. Matt then asks the emperor to have the two groups of gods fight each other.

They do, but the Guardians are clearly outmatched. In desperation, Turbo uses his exhaust to mask the Guardians, allowing Scooter to disguise them as Centurions. The Renegades immediately conclude that they've escaped. Cy-Kill turns on the emperor, claiming that this was his doing. The guards seize him, and Cy-Kill declares himself ruler of the empire. They leave, and the hopeless Guardians reveal themselves – and meet Marcus, who agrees to help them defeat the Renegades. 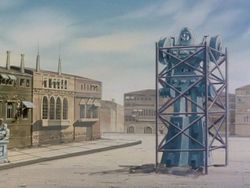 Back in modern times, Ling's lab undergoes a sudden architectural transfiguration. Path Finder, confused, catches a newspaper out of the wind and takes it to the professor and A.J. To their horror, the headlines show Cy-Kill being appointed as governor of North America! A.J. and Path Finder race to the time transporter, determined to help their friends in the past. But just as they leave, BuggyMan bursts through the door, telling Ling that he's there to inaugurate Cy-Kill as master of the Earth upon his return. A.J. and Pathfinder arrive in Rome, where Cy-Kill has erected a colossal statue of himself. Path Finder blasts its head off with her lasers. At the arena, Marcus is finishing up some replacement parts for the Guardians. A.J. radios them to announce her arrival. Meanwhile, the general informs Cy-Kill that his statue has been destroyed by a "demon from the air." Just then, the three repaired Guardians show up with Path Finder. The two groups start to fight, now on even footing. 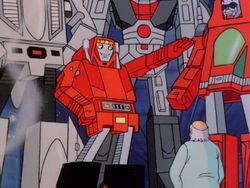 His life was gentle; and the elements
So mixed in him, that Nature might stand up
And say to all the world, THIS WAS A MAN!

After a brief battle, the Guardians stand victorious, and Marcus declares the "false gods" to be defunct. In the present, the laboratory returns to normal. The Guardians and the humans return to the present, defeated Renegades in tow, but BuggyMan zaps the Renegades with a Stealth Device, allowing them to escape. He's also short-circuited the time transporter, causing it to explode. Leader-1 protects the group from the explosion with his force field. Finally, Nick and Scooter search the ruined lab for a history book, to see if they'd left any mark on ancient Rome. There's no mention of the Renegades, but the book does show a mysterious statue resembling a certain Guardian – which has apparently baffled historians for centuries. The statue shows Scooter raising his left arm in an oddly specific gesture. Scooter mimics the statue to the amusement of his friends.

This is fine, right?

"In the past, there are no guardians to protect our human enemies!"
"Which means their future...has just run out!"

"We've got a rendezvous with the past...and I don't want to be late." 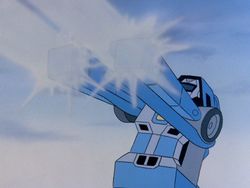 "Our enemies will soon be history!"

—Cy-Kill and Crasher engaged in some time-related punnery

"I just love being an uncivil engineer!"

—BuggyMan before blowing up a dam

"Little Matt had better look both ways before he crosses any streets I'm driving on."

"Look! The Roman gods have appeared to aid their Centurions!"
"Gods? Finally, someone acknowledges our true status."

"My time transporter is ruined!"
"Just as well. Tampering with history is much too dangerous!"

—Leader-1 has no time for sympathy. 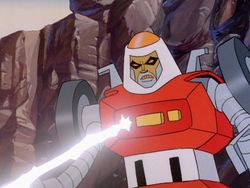 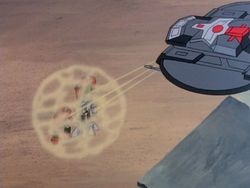 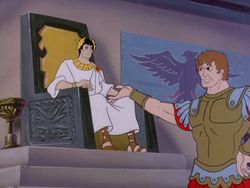 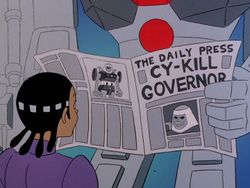 The California election results are in! 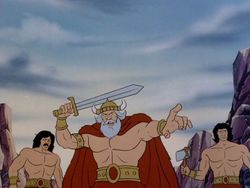 2015 — Challenge of the GoBots — The Series, Volume One (Warner Archive Collection, US)