The GoBots are captured by an alien bounty hunter and sold into gladiatorial slavery. 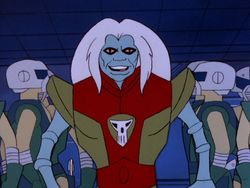 Out in space aboard the Command Center, A.J. successfully completes her first assignment reading star charts. The Guardians all congratulate her, also taking the time to placate a grumpy Nick, who is irritated at all the attention she is receiving. Before they can set course for a new destination, they are blindsided by the Renegades in Thruster, and the damage inflicted to the Command Center leaves it without power. When the Renegades close in to deliver the final blow, however, Thruster's power suddenly drains away as well—the work of a huge, insect-like spaceship that appears overhead and sucks both the powerless Guardian and Renegade vessels into its belly. The two craft are surrounded by alien guardsmen, and when the GoBots and humans emerge, they are immediately bound with energy restraints. The ship's captain introduces himself as B'oosa and reveals that the GoBots are now his captives, to be taken to the planetoid Kolob and sold to its gamesmaster Crespas as fighters for his gladiatorial games. They are ushered into cells with B'oosa's many other captives from across the galaxy for the return trip to Kolob, but Cy-Kill immediately begins plotting to convince their captor that the Renegades will serve better as allies than as slaves.

Upon arrival on Kolob, B'oosa presents the GoBots and the control for their restraints to Crespas. Leader-1 demands they be released, while Cy-Kill tries to befriend the alien—both pleas that fall on deaf ears, as Crespas applauds their spirit and decrees they will fight to the death the next day. A furious Turbo tries to overcome his restraints, but he is blasted into submission by B'oosa's guards and taken to a cell with the other Guardians. When the next day dawns, with crowds of money-hungry gamblers betting on the outcome, the Guardians and Renegades have no choice but to battle four-on-four in Crespas's arena: Leader-1 takes on Cy-Kill, Turbo overpowers BuggyMan, Scooter tries to keep out of Crasher's way, and Path Finder engages in an aerial battle with Cop-Tur. She nearly meets her end between Cop-Tur's rotors, but Turbo zooms to her rescue, while Leader-1 uses his forcefield to protect Scooter. 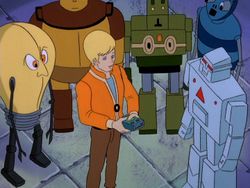 Come on, that one guy is literally a lightbulb!

Concurrently, on Earth, UNECOM grows concerned over their loss of contact with Leader-1's team, so Hans-Cuff takes a Command Center and a crew out to their last known location to investigate. There, the Guardians cross paths with a Thruster captained by Fitor, who is searching for the missing Cy-Kill. Each side presumes the other has captured their comrades, but rationality prevails when a quick scan of the two vessels proves that neither has the missing GoBots aboard. Consequently, Hans-Cuff and Fitor agree to join forces to track down Leader-1, Cy-Kill, and their other lost allies. 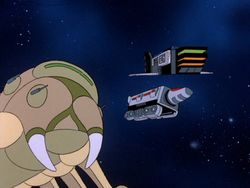 Meanwhile, Matt, Nick, and A.J. watch the GoBots' battle in the arena from the cell they share with various other prisoners. Nick believes he can build a device to override Crespas's restraint control device, but has no means of doing so until one of the robotic prisoners speaks up, volunteering some of his own components, and those from other prisoners, to help construct the disruptor. Working quickly, Nick and Matt complete the device just as the GoBots' energy levels are reaching dangerous lows. While Leader-1 shields his troops from Renegade fire with his forcefield, they all combine their firepower to blast a hole in the dome over the arena. As the crowd of spectators scatters, the Renegades realize they are free of Crespas's control and make their escape, while the Guardians pause only to rescue their human allies and the other prisoners from captivity. The flurry of craft leaving Kolob all at once catches Fitor and Hans-Cuff's attention, and as they draw closer to investigate, they are met by Leader-1 and Cy-Kill's teams, fleeing in their ships with B'oosa hot on their tails, desperate to recapture them to avoid giving Crespas a refund! Unfortunately for the cheapskate alien, the Guardians and Renegades combine their firepower to hold him off, then make good their getaway, the Thrusters activating their stealth devices and the Command Centers disappearing into hyperspace. Scooter expresses relief to be away from Kolob; Leader-1 and Turbo jokingly tell him that he put up such a good fight that being a gladiator could be a new career for him, but Scooter announces that he would prefer to be a librarian! 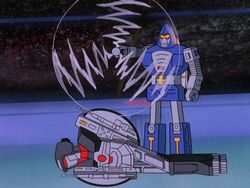 "Hang in, Scooter! Nick's building a jamming device to override Crespas' black box!"
"Better hurry it up... or you'll have to put me in a black box!"

"I was about to turn those Guardian pests into party dip!" 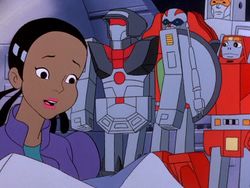 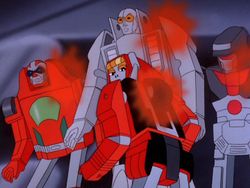 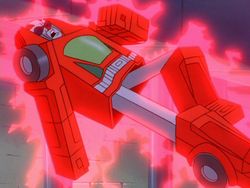 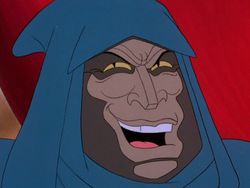