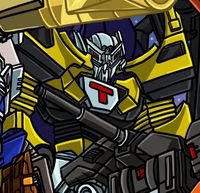 During the Diaspora, Decker Decker was dispatched to Level 29 along with an assortment of Guardians and Renegades. Cultural Appropriation

Through the use of a Time Portal, Cy-Kill removed the GoBeing Luther Unum from the past before he grew to become the GoBot Leader-1. A new, Renegade-dominated future arose where Cy-Kill controlled Earth and Gobotron, with only a pitiful resistance to oppose him. Some Guardians from the original timeline had survived as well, and attempted to undo his new world. Decker Decker was one of Cy-Kill's Renegades in this universe, and with Fly Trap attempted to stop the resistance from freeing Luther Unum. Renegade Victory Part 1 Some quick thinking on Luther's part used the Renegades' size against them, sending Decker Decker and Fly Trap tumbling over each other. The Guardians eventually managed to restore Luther to the past and undo the alternate timeline. Renegade Victory Part 2

Back in the original timeline, Decker Decker had been a member of a deep space exploration crew, leaving Gobotron thousands of years ago shortly after the upgrade from GoBeing to GoBot. During the long mission, however, Decker Decker became increasingly critical of their captain, Hi-Way, and his command decisions.

As they approached Gobotron again after so long, the GoBot ship was attacked and captured by Renegade Space Hawks. Decker Decker blamed Hi-Way for their predicament, a rift which Cy-Kill noticed and plotted to exploit. He used his subtle mind control powers to push Hi-Way's negative traits to the surface, causing him to act even more imperious than normal and drive Decker Decker further away. When Crasher approached them, Decker Decker and his shipmate Vain Train were more than willing to sign up with the Renegades full time. Brother's Keeper

Unfortunately for Decker Decker, he quickly became known as one of the Renegades' second-stringers. When Cy-Kill uncovered the Ashi Dojo hidden away in Japan's Mount Hotaka, he seized the sensei's boy in order to force the master to teach his Renegades ninjitsu. Decker Decker was identified as one of the Renegades most in need of an upgrade of grace and skill. Along with Fly Trap, Water Walk, Spoons, Stinger, and Stallion, he quickly mastered the art of ninjitsu.

Decker Decker and Fly Trap slipped aboard the Command Center to steal an experimental microchip Cy-Kill needed for his Reciprocating Positronic Jammer. Although the Guardians' passive sensors were alert for the ninjas, Leader-1 and Turbo were unable to defeat the former back benchers of the Renegades. Luckily, Decker Decker's gloating led the Guardians to Mount Hotaka, where Leader-1 learned even greater ninja skills after treating the sensei with respect. During the final fight where Leader-1 engaged the Renegade Ninjas in mortal combat, the jammer went off and conveniently wiped the ninja knowledge from the minds of all GoBots present. Cy-Kill's Ninjas

Cy-Kill wanted the Dynamic Asymmetrical Wavelength Nullifier, a device invented by Doctor Faraji. When the doctor attended SciFi Con in New York, the Renegades saw it as an opportunity to kidnap him. Coming in costume for the affair, Decker Decker was decked out as Deadpool. Darkest Before the Dawn

Decker Decker, Crossword, and Fangs engaged the Secret Riders in battle outside a human prison. They fled after Crossword tossed Twister through the side of the prison, causing an escape. The Guardian Smashers

Decker Decker was one of the beneficiaries of Project: Nemesis. The Master Renegade had created a second set of Power Suits for the Renegades, but abandoned them with the ship necessary to form the Power Warrior, Grungy. Nevertheless, Doctor Go was able to recreate the central component, forming a tank unit called Nemesis. Decker Decker, BuggyMan, Block Head, and Loco used the Power Suits at Cy-Kill's direction to amplify their powers, and Cy-Kill himself controlled the tank module when they all linked up to form Nemesis.

Seeing an opportunity to disrupt the tri-planet alliance treaty being held on Quartex, Cy-Kill and the Renegades joined forces with Magmar to attack UNECOM, the Guardians, and Boulder's Rock Lords. The battle initially seemed evenly matched as Cy-Kill pitted Puzzler and Monsterous against the Power Warrior Courageous and the Fossil Lord's Fossilsaurus. He held Decker Decker's men in reserve, however, unleashing his third combiner Nemesis at a key moment in the battle. The tide turned in favor of the Renegades, and Nemesis captured Leader-1 and Boulder. Combiner Wars Part 1

Unfortunately, the Guardians and humans used teamwork and Cy-Kill's own ego to drive a rift between him and his allies. The captives were rescued, and a united heroic effort was prepared for the Combiners now. Decker Decker's team as Nemesis were defeated, and Cy-Kill was seemingly lost forever as he plunged into boiling lava. Combiner Wars Part 2

As Sideways and Gong played with mixing universal streams, the Renegades staged an all-out assault on Autobot City on Earth. Decker Decker was one of the Renegades fighting to breach the Autobot defenses. Echoes and Fragments

Doubledecker Bus Robo converts from robot into Mitsubishi Fuso Aero King double decker bus. Produced by Bandai for the Machine Robo line, Doubledecker Bus Robo was one of several molds not imported to the west by Tonka for the GoBots franchise. He was retroactively added to GoBots continuity by Renegade Rhetoric, and given the GoBots name of "Decker Decker".