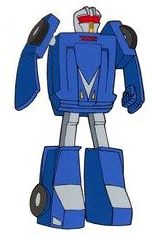 Stallion is a Renegade. Wildly independent, Stallion also has a competitive streak. He has a good natured rivalry with his fellow Renegade, Stinger, and Cy-Kill often pairs them together as partners.

Stallion was part of the team of Renegades - along with Psycho, Stinger, Bad Boy, Block Head and Spoiler - sent to GoBotron's Prison Moon to oversee to the disassembling of the captured Leader-1. Along with Stinger, Stallion loaded the injured Guardian into the machine shortly before a Guardian rescue squad led by Sparky appeared. While Stallion was knocked out by Turbo, Psycho was still able to activate the machine and disassemble Leader-1. The Fall of GoBotron 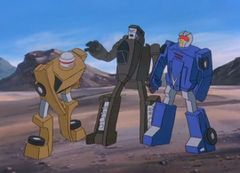 Together with Stinger and Bad Boy again he was part of a team of Cy-Kill's most loyal followers led by Fitor to raid a UNECOM surveillance facility, causing considerable damage before the Guardians arrived. However he was personally flattened by Turbo and the Renegades were forced to retreat - abandoning Fitor, much to Cy-Kill's subsequent chagrin, as the high-ranking officer was restrained in Leader-1's force-field when the Astrobeam took them back to Roguestar. Fitor to the Finish Twin Spin and Stallion were seen patrolling in the detention facility onboard Roguestar as it orbited Cordax; however, A.J. Foster and Nick Burns evaded them, freeing Small Foot and escaping to the planet below. GoBots: Battle of the Rock Lords 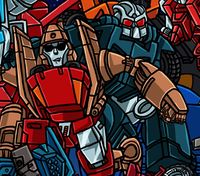 During the Diaspora, Stallion was dispatched to Level 11 along with an assortment of Guardians and Renegades. Cultural Appropriation

When Cy-Kill schemed to become President of the United States, Stinger and Stallion campaigned with the auto workers of Detroit to ensure his victory. Cy-Kill For President Stallion, Spoiler and Crasher participated in the Alienapolis Five Million on behalf of the Renegades, with control of the entire planet's society as the prize. Naturally, they cheated, but Turbo still won the race for the Guardians. The Alienapolis Five Million Stinger and Stallion raided a museum to steal a meteorite fragment for Cy-Kill's new weapon, the reciprocating positronic jammer. Unfortunately, the Robo Rebels interrupted them and the clumsy Renegades stumbled through the artifacts while making their escape. Stinger ripped a Japanese tapestry and got part of it caught in his door as they sped away. Back at Thruster, Cy-Kill discovered a hidden scroll inside the tapestry promising great power. He used it to locate the Ashi Dojo on Mount Hotaka in Japan, and forced the ninja master to teach Stinger, Stallion and four other Renegades the secrets of ninjitsu. They stymied the Guardians with their new skills until the master taught Leader-1 his secrets too. The status quo was restored when the reciprocating positronic jammer wiped the new memories of all the GoBot ninjas. Cy-Kill's Ninjas

While assessing his new troops from Axiom Nexus. Cy-Kill considered Breez's anger management issues suitable to pair him with Stallion as a partner. Renegade Rhetoric 2015/10/16 He also thought Stallion would be the perfect opponent to bring down the cocky new Guardian racer, Beamer. Opportunity Knocks Part 2 Stallion teamed with Fright Face, Jig Saw, and Zod to steal a quantum supercomputer from Cape Canaveral. When Zod bit into the probe holding the supercomputer and suddenly gained super-intelligence, however, Stallion and the Renegades retreated to consult Cy-Kill. In Zod We Trust

As Sideways and Gong played with mixing universal streams, the Renegades staged an all-out assault on Autobot City on Earth. Stallion strafed Hot Rod and Kup after they dealt with Fly Trap and Destroyer. Echoes and Fragments

Stallion was one of the Renegade Go-Bots that flocked to Cy-Kill in the desert near Route 66, helping surround and subdue the US government Go-Bot Leader-1 and retrieve military secrets from his brain. Issue 1 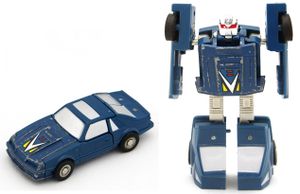 Stallion was released by Tonka in the second series of GoBots, and converts from robot to Ford Mustang sports car in 8 steps. Stallion converts from robot to Ford Mustang. To meet demand Tonka commissioned Bandai to produce several additional moulds specifically for use in the GoBots toyline overseas, including Stallion. The toy is stamped "MRT-45" (Machine Robo Tonka) for reference. Initial versions featured stickered car windows, but a running change saw paint used instead. Like several of the 'MRT' moulds Stallion has a surprising amount of articulation for a toy of the period of such a small size, and is less prone to wear than many of its' peers, while also having an interesting and relatively complex transformation pattern.

An unchanged Stallion was included one of Tonka's Renegade Gift Pack #2 sets, with similarly unchanged versions of Spoons and Tux.

Stallion was planned to be included in a Gift Pack along with Crasher and Loco which was advertised in the 1985 Tonka catalogue but was ultimately not released.