That's what she said.

Breez is a Renegade with anger management issues.

Breez was one of the Renegades who laid in wait for the Guardians on Fintergand, using a huge electromagnet to pull the Command Center off course. However, the Guardians soon gained the upper hand and Breez tried to take shelter in a crater. Unfortunately, he was spotted by Sky Fly and Guide Star, who filled the crater with gumbo - causing Breez to announce the Renegades had lost again. Ambush in Space He then operated the Meteor Control Dome, bringing a shower of the objects down on Earth. He attempted to free but came under attack from Sky Fly, and had to make a forced landing. As the meteors became even more numerous, the Renegades retreated. The Meteor Shower

Along with Cy-Kill and Odd Ball, Breez squared off against the Guardians on the Moon, but the Renegades were defeated when Guide Star kicked a meteor into the back of Cy-Kill's head. He's lost fights for worse reasons, it has to be said. Moonstrike 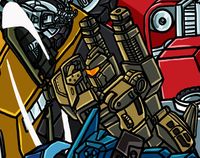 During the Diaspora, Breez was dispatched to Level 29 along with an assortment of Guardians and Renegades. Cultural Appropriation

Breez was a member of the Instigation Mini-Con Team along with Odd Ball and Pow Wow. Hailing from an Aurex universal stream, the trio were marooned in the Offworlder section of Axiom Nexus. When Cy-Kill went recruiting for the Renegades, the Mini-Cons eagerly signed up for his cause. Cy-Kill had them outfitted with traditional GoBot features such as hand-blasters and flight systems before returning to the Gargent Cluster. Cy-Kill found that Breez had some anger management issues, but ones that could easily be exploited with a proper partner like Stallion or Bad Boy. Renegade Rhetoric

Back on Level 1, Breez and the new Renegades joined the fight against the Guardians upon Cy-Kill's triumphant return. They eagerly took the fight to the newest Guardian Academy graduates. Opportunity Knocks Part 2 In an evaluation of his new extra-dimensional troopers, Cy-Kill observed that Pow Wow and Breez still had a tendency to stick together, but had otherwise integrated well into the larger Renegade forces. One Born Every Minute Breez joined Cy-Kill's command crew of Cop-Tur and Crasher as they assaulted the Guardian fleet in repairs in the Procyon System. In Zod We Trust 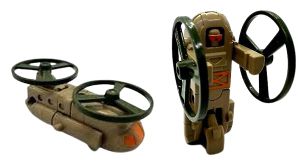 Breez was one of the few GoBots toys designed by Tonka and converts from robot to helicopter in 5 steps. The toy was available at Wendy's restaurants, being available for 99¢ with any other purchase. The figure was never released outside of North America. Breez has articulation at the shoulders, while the rotors can clip to the outside of the arms in robot mode. Breez is the only one of the Wendy's figures to have additional accessories, which makes him slightly harder to find complete than the others. Though not by much. Along with Beamer and Odd Ball he's probably got the best proportions too. There doesn't seem to be a particular reason why he looks so much like Twin Spin.