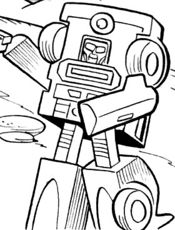 Beamer is one of the quickest Guardians in his car mode and one of the fastest-talking in robot mode. This combination means he often gets into trouble but also has the skills to get back out of it again.

Beamer was on duty on the bridge of the Command Center - well, playing games on the Space Scanner anyway. His slacking was interrupted by an alarm, as the Renegades were using a laser beam to turn Earth's oceans to steam. Thankfully Leader-1 and Guide Star were able to sort them out. The Sea Vaporiser Beamer was later onboard the Command Center when Cy-Kill used a huge magnet to bring the ship down on the planet Fintergand. In the resulting fight Pow Wow and Odd Ball tried to catch Beamer in a classic pincer movement but reckoned without his speed and agility - the Guardian simply sped and weaved between them, leaving the pair to collide. The Renegades soon retreated, leaving Leader-1, Beamer, Guide Star and Sky Fly to sing a rousing version of the Guardian Victory Song. Ambush in Space

Beamer was enjoying a drive through mountains on Earth in his sportscar mode when a meteor entered the atmosphere, only narrowly avoiding the Guardian. He reported the incident to Guide Star, who investigated and traced the nub of the activity to the Renegades' new Meteor Control Dome, manned by Breez. Leader-1 was able to smash the dome with the Renegades' own meteors, and Beamer was one of the Guardians who cheered their leader after another victory. The Meteor Shower 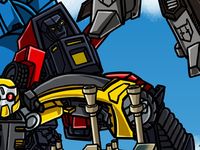 During the Diaspora, Beamer was dispatched to Level 63 along with an assortment of Guardians and Renegades. Cultural Appropriation

Beamer and his friends Guide Star and Sky Fly were recent graduates of the Guardian Academy. On Earth, Beamer and Pumper provided security to a UNECOM engineering facility in New Jersey. They were attacked by Crasher, Tank, and Hornet, and were unable to prevent the Renegades from destroying an experimental new jet. Bears and Bulls When Cy-Kill went missing during the Scootonium incident, Beamer participated in a massive Guardian attack on Rogue Star just as Cy-Kill returned from his other-dimensional exile. The newly-recruited Renegades Pow Wow, Breez, and Odd Ball attacked Beamer and his friends as they arrived. Opportunity Knocks Part 2

During the Battle of Guardian City, Beamer and his fellow Academy cadets were gunned down by Megatron. Echoes and Fragments 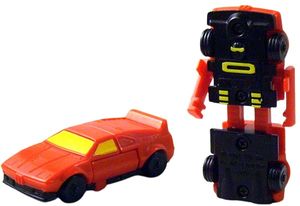 Well, there weren't many red sportscars in the range.

GoBots Beamer converts from robot to BMW M1 sports car in 5 steps. One of only a handful of GoBots toys actually designed by Tonka (and thus probably now owned by Hasbro), he was released through Wendy's Restaurant as a premium; the toy cost 99¢ with any purchase. Beamer's backing card included a short character biography. The all-plastic toy has some articulation at the shoulders, and is alongside Breez as the only one in the range with half-decent proportions. As with the rest of the range, Beamer's simplicity makes him incredibly durable - however, the yellow paint applications can rub off, especially where they end up on the underside of the car mode. While it is almost certainly just a coincidence, Beamer has more than a passing resemblance to Testarossa Winner in robot mode.