Odd Ball is an unpredictable Renegade who has bonded with the Monster GoBots.

Odd Ball was one of the Renegades who laid in wait for the Guardians on Fintergand, using a huge electromagnet to pull the Command Center off course. He and Pow Wow tried to gang up on Beamer but the fast Guardian slipped between them and the pair collided.Ambush in Space After Cy-Kill tried to bombard the Guardians with meteors, he joined his leader in pursuing Sky Fly. However, the meteor storm was too intense and the Renegades were forced to retreat.The Meteor Shower

Along with Cy-Kill and Breez, Odd Ball squared off against the Guardians on the Moon, but the Renegades were defeated when Guide Star kicked a meteor into the back of Cy-Kill's head. Moonstrike 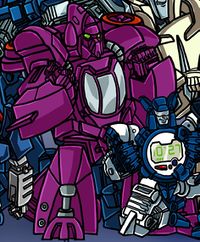 Odd Ball was a member of the Instigation Mini-Con Team along with Breez and Pow Wow. Hailing from an Aurex universal stream, the trio were marooned in the Offworlder section of Axiom Nexus. When Cy-Kill went recruiting for the Renegades, the Mini-Cons eagerly signed up for his cause. Cy-Kill had them outfitted with traditional GoBot features such as hand-blasters and flight systems before returning to the Gargent Cluster. Odd Ball's unpredictable nature led Cy-Kill to consider pairing him with the slow but dependable Block Head when they ultimately returned home. Renegade Rhetoric 2015/10/16 Back on Level 1, Odd Ball and the new Renegades joined the fight against the Guardians upon Cy-Kill's triumphant return. They eagerly took the fight to the newest Guardian Academy graduates. Opportunity Knocks Part 2 Cy-Kill later on lamented that Odd Ball had fallen in with the Monster GoBots, Vamp and Scorp, whose loyalty had always been...fluid. One Born Every Minute

On Antares III, the diminutive Odd Ball tried to snack on Hot Rod when he got tangled up in mechanical vines. As the young Autobot proved to tenacious a meal, Odd Ball fled. Echoes and Fragments 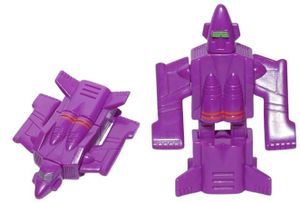 Odd Ball was one of the few GoBots toys designed by Tonka and converts from robot to space ship in 5 steps. The toy was available at Wendy's restaurants, being available for 99¢ with any other purchase. The figure was never released outside of North America. Odd Ball has articulation at the shoulders, and due to being a Monster GoBot gets away with the weird restrictions of the toys a lot better than some of his fellow premiums. He is also one of the few GoBots toys with a turning head. A character biography was printed on the reverse of his card.