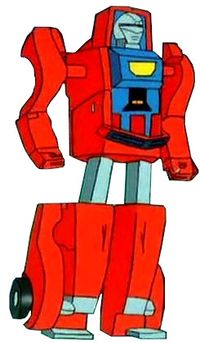 Good Knight is a higher society member of the Guardians compared to the regular rank-and-file. As such he is often found in some sort of high-ranking consultant-type role that doesn't involve any work, such as on the GoBotron Security Council.

The aristocratic Good Knight was a member of the GoBotron Security Council alongside Professor Von Joy, Leader-1, Scooter, Matt Hunter, A.J. Foster and Nick Burns. The group were convened on Earth to discuss a strategy for dealing with the Nova Beam devised by Doctor Braxis for the Renegades after the destruction of Nywilak's sun. However, their plans for a counter-attack were forestalled by the stealth device on Roguestar; thankfully Cy-Kill decided to double-cross Braxis, who then helped the Guardians save Earth from destruction.Nova Beam Good Knight was summoned to a lower level of GoBotron for a clandestine meeting with Leader-1 - however, the Guardian commander had been replaced by a Renegade-devised robot double. Before he could react Good Knight was incapacitated by Cy-Kill and replaced by a doppelganger himself. The real Good Knight was freed by Scooter and Small Foot from the Moon of Shadows, and helped Leader-1's team retake the planet.Doppelganger 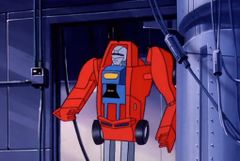 He was stationed on Earth when Cy-Kill and Dr. Go acquired the plans for the human Buddy's spectrometer, using it to take over the Guardians' minds. Along with Leader-1, Turbo and Blaster, Good Knight came under Renegade control. Along with Turbo he chased after the unaffected Scooter and Nick Burns but was fooled by one of the diminutive Guardian's holograms, reporting to Leader-1 that they had been killed. The group were then dispatched to GoBotron to capture the Guardian Council, with Good Knight staying with the ship. When the others returned with their captives he provided covering fire to frustrate the pursuit of Hans-Cuff and Night Ranger before the beta frequency-controlled Guardians headed towards Outpost Omni to a rendezvous with Cy-Kill. Thankfully Scooter, Nick and Buddy were able to free the Guardians and Cy-Kill's plan was foiled. Whiz Kid

Good Knight and Flip Top joined in the battle against a huge Renegade army gathered at Mauna Mauna by Cy-Kill. The Battle at the End of the Earth

During the Diaspora, Good Knight was dispatched to Level 59 along with an assortment of Guardians and evil Rock Lords. Cultural Appropriation 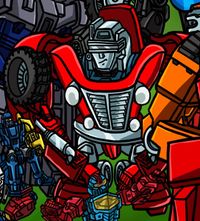 As a representative of the Guardian Council, Good Knight Astro-Beamed to Earth in order to stop Cy-Kill from getting his hands on more Sorium, the element he once used to brainwashed the entire planet. Fortunately, Good Knight was able to obliterate the meteorite containing the sorium before Cy-Kill, Cop-Tur, and Screw Head could make off with the mother lode. Much to his distaste, Good Knight remained on Earth to act as security for Scooter, who was serving as a mall Santa in service of the holiday spirit. Good Knight didn't understand the point of the holiday festivities, and felt Scooter was demeaning himself. The Guardians had inexplicably stumbled into a Renegade plot to distribute the components of a worldwide Anti-Guardian Field via gifts given by mall Santas to children, so Scooter and Good Knight were taken prisoner and brought back to Thruster.Held in the detention cells by Cop-Tur, Good Knight managed to use the power of Christmas to convince Cop-Tur that not only was Santa real, he wouldn't bring any gifts to such a naughty Renegades. Fearing a lump of coal in his stocking come Christmas morn', Cop-Tur released the Guardians from the brig, giving Scooter time to rewire the Anti-Guardian Field into an Anti-Renegade Field. And to All a Good Knight During a Renegade assault on Philadelphia, the Guardians deployed to prevent the six parts of Puzzler from assembling to back Monsterous against Courageous. Good Knight and Defendor were successful in stopping Rube from joining his fellows. Six Heads are Better than One

When the Autobot Spy Changers first arrived on Strata 22, Turbo mistakenly assumed they were Renegades. Good Knight was one of the Guardians he assembled to attack and capture the Spy Changers. Brain Problem Situation

Sideways and Gong created a hybrid universe that combined influences of both the GoBots and Transformers. When the Decepticons attacked Guardian City on Earth, Good Knight was taken offline when Ramjet battered Spay-C into him. Echoes and Fragments

Goodknight was one of the Renegade Go-Bots that flocked to Cy-Kill in the desert near Route 66, helping surround and subdue the US government Go-Bot Leader-1 and retrieve military secrets from his brain Issue 1 and later joined in the uprising against humanity by releasing the animals from a zoo.Issue 2 Centuries into the future he had either had a change of heart or been brainwashed into joining Leader-1's group, as he was present when the Guardian leader was fatally wounded by the Renegade-controlled Command Center.Issue 4 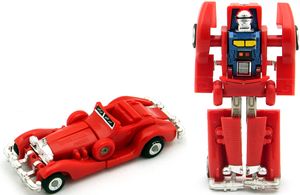 Good Knight was released by Tonka in the second series of GoBots, and converts from robot to Excalibur Series 3 roadster in 6 steps. The toy was a repackaging of Classic Robo from Machine Robo, with no significant changes but omitting the extra sticker sheet included the Japanese. He is sturdy as GoBots of the time go, but as his front bumper/feet are made of soft plastic they can warp, which usually causes damage to the silver paint.

The European version of Good Knight was the same as the Japanese release, including the extra sticker sheet. Some Robo Machine catalogues spell the name as "Good Night" but this has not been used on any known release of the figure.

The first toy from the sixth wave of figures, Good Knight was released by Bandai Australia in 1985. He remained identical to the original Classic Robo toy, albeit packaged on a black backing card depicting a yellow-tinted alien landscape.

The figure was reissued by Bandai in Europe during 1993 as part of the third series of Robo Machines. For trademark reasons the figure was renamed simply Classic Car in the British market, with localised versions of the name used in other markets. Sadly like most of the Robo Machines figures Classic Car uses poor quality materials and suffers from mould degradation.