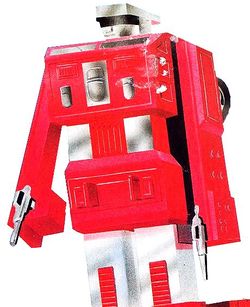 Pumper is a friendly member of the Guardians. He is the brother of Dumper, and together they form a formidable detective team. Pumper gets his name from his habit of pumping iron to keep in shape, and it fits with his fire engine mode's ability to pump water over fires started by Renegades.

When Cy-Kill and his evil GoBots escaped from containment on GoBotron, Pumper and his brother were among the GoBot Security Force troops to pile onto the Command Center and give chase. After Leader-1 realised their quarry had disguised themselves as Earth vehicles the Security Forces followed suit, with Pumper becoming a fire engine before they landed on Earth and tried to stop Cy-Kill's rampage. They managed it with help from the humans Pete and Nancy, and Pumper was present as Leader-1 presented the kids with large medals. Escape to Planet Earth

Pumper was one of the Friendly Machine Men native to Earth when it was targeted by the Enemy Machine Men of Robotron, led by Cy-Kill. Despite Leader-1 devising robot modes for the Machine Men the first attack was a rout. Turbo was among those who regrouped at the Command Centre and prepared for a counter-offensive, using a gun mounted on his fire engine mode ladder to shoot down Cop-Tur. Space Wars

During the Diaspora, Pumper was dispatched to Level 11 along with an assortment of Guardians and Renegades. Cultural Appropriation

Pumper, Dumper, and Bullseye were on Command Center 6 when they detected Cy-Kill near Galleon. They joined Command Center 14 in capturing Cy-Kill, although they suffered damages and lost one vessel in the process. The Long Game Pumper was one of the Guardian who fell under the influence of Doctor Braxis and his Destabilizer Cannon upgrade. Once Braxis Twice Shy Part 2 Pumper and Staks were guarding a global summit on pollution. They were blasted by Zero and the Master Renegade when the villains stole an experimental algae. Trash and Treachery At UNECOM, Pumper and Beamer failed to stop Crasher and a squad of Renegades from sabotaging an experimental aircraft, although Pumper did manage to wing Crasher as she escaped. Later, he acted as reinforcements for Leader-1's command team as they battled a pair of animal mechs. Bears and Bulls

In an unstable hybrid universe that incorporated both GoBots and Transformers, Pumper was aboard a Guardian shuttle bound for Earth when Megatron attacked and hijacked the ship. The Decepticons executed him while seizing the ship.

(Pumper only suffered this fate retroactively due to the machinations of Sideways and Gong. When the events actually took place in this hybrid timeline, it was an Autobot crew who were attacked by Renegades.) Echoes and Fragments 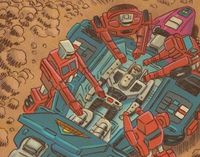 After Leader-1 was killed by Cy-Kill with the Command Center Pumper, along with Major Domo, Tail Pipe and Good Knight and Night Ranger, buried him in the chest of the Go-Bot god Courageous. He noted Leader-1 was quick to anger as they were watched by Eno. It was probably one of the nicer things that could be said about Leader-1, who was a gigantic scumbag. Issue 4 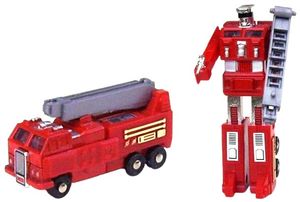 Pumper was released by Tonka in the first series of GoBots, and converts from robot to fire engine of undetermined make in 5 steps. The toy was a repackaging of Fire Robo from Machine Robo, with no significant changes but omitting the extra sticker sheet of the Japanese release. Pumper was discontinued after the first series of GoBots. While Pumper's instructions show his ladder stowing on his arm it doesn't clip in or anything, more just balances. His gun can clip into the tip of the ladder in vehicle mode but is one of the tiniest accessories ever produced for a children's toyline and thus it is incredibly hard to find loose, complete versions of Pumper - especially as he was discontinued early and was not issued in Europe, Australia or Canada. The character's card art featured him with two guns but the toy only came with one. 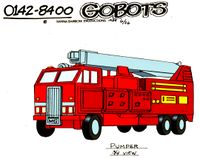