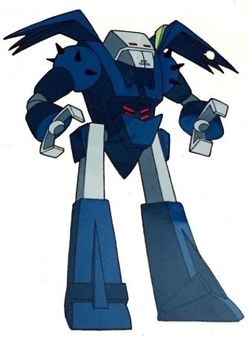 Hornet is a Renegade of the Monster variety.

Hornet took part in the first Renegade revolt on GoBotron and in the aftermath of its' failure was among those who fled to Xeros. High Protector Cy-Kill was assigned by the Guardian Council to mop up the remnants of the Renegades and set out to tackle them with Dart and Bullseye. However, their approach was detected by Hornet and Loco in the Renegades' base, who kept the Guardians busy with the base's defences until Zero, Bugsie and Klaws arrived; Cy-Kill barely escaped with his life and the impact of his failure to tackle the Renegades greatly hurt his standing with the Council and was the start of his slide towards defection towards the Renegades."Et Tu, Cy-Kill"

Years later he piloted a Thruster in the Renegades' mass attack on GoBotron; however, the fleet walked straight into a Guardian trap and was almost entirely annihilated.Mission: GoBotron Along with Crasher, Pincher and Bugsie Hornet would be part of the force taken down to the surface of Cordax by Cy-Kill, helping with the rout of Boulder's troops and allowing the Renegades to forge an alliance with the evil Rock Lord Magmar.GoBots: Battle of the Rock Lords

After the Robo Rebels defeated the Master Renegade's plans, Hornet and the other Monster GoBots returned to the Renegades, and Cy-Kill graciously accepted them. Renegade Rhetoric 2015/10/15 During the fight over the prototype Space Hawk ships, the Guardians assaulted a Renegade base on the dark side of the moon. Hornet, Crasher, and Fly Trap joined Cy-Kill in repelling the assault, but the Monster GoBot was brought down by Bent Wing of the Robo Rebels. The Hawks of Space Part 2 When the inventor of the Dynamic Asymmetrical Wavelength Nullifier attended SciFi Con in New York, Cy-Kill and the Renegades attended in costume in order to capture the doctor. Hornet chose to appear in the Slave Leia costume from Return of the Jedi. Naturally. Darkest Before the Dawn Hornet and Tank assisted Crasher in an attack on a UNECOM base in New Jersey. This attack led to a Renegade alliance with Drake J. Hinkleford IV and manipulation of the New York Stock Exchange. However, Hinkleford had designed bear and bull mechs to eliminate the Renegades for him once he got what he wanted, and when Cy-Kill found out he turned Hornet and the other Renegades against their ally. Bears and Bulls

As Sideways and Gong played with mixing universal streams, Hornet and the Monster GoBots worked for the Master Renegade on Antares III, rounding up travelers and sentencing them to death in the Dactyl pit. Hornet, Bugsie, Scorp, and Bladez captured Hot Rod and Kup after they crashed, bringing them to the pit. Echoes and Fragments

Hornet was one of the insectoid Go-Bots that appeared on Gobotron, the metal world built around Earth. When Spay-C arrived with six human astronauts he joined Pincher, Scorp, Klaws and Heart Attack in menacing the newcomers. However, the whole bunch of them were scared off by the arrival of Zod.Issue 3 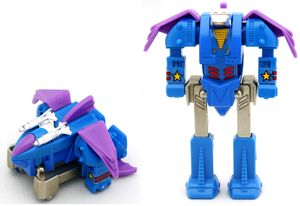 Hornet was released by Tonka in the third series of GoBots, and converts from robot to flying monster tank thing in 5 steps. Initially designed by Bandai for the Machine Robo line, almost certainly as a Devil Invader, the figure was unreleased until the prototype was used by Tonka. As such, it was never released in Japan. Hornet has articulation in the shoulders and hips.
Hornet was included in the third and final series' Renegade assortment (#7254); like all third series GoBots he came with with a card-mounted 3-D GoBots Sticker. 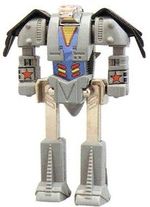 Hornet was also released in Australia as part of the seventh series of Machine Men figures. As with the Robo Machine release, while catalogues and cardbacks showed the American version of Hornet the grey/black version of the figure was used instead.