GoBots: Battle of the Rock Lords 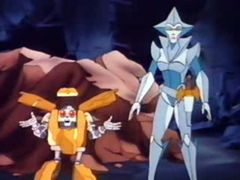 "Whoa, this must be the junk capital of the universe."

Leader-1, Turbo, Tork and Van Guard are continuing the repair work to GoBotron when Scooter discovers an unidentified hollow meteor heading towards the planet, which changes course and heads to the city. Believing it may be a Renegade trick, the Guardians attempt to intercept it, but the strange object crashes in GoBotolis. The object then splits open to reveal two life forms - rocks that turn into robots. Turbo naturally wants to immediately attack them but Leader-1 cautions otherwise. The pair introduce themselves as Solitaire and Nuggit from the planet Cordax on a mission to seek help from the GoBots. They are taken to the GoBotron Fortress, where Solitaire explains that Magmar, one of the planet's many Rock Lords, is attempting to steal the Power Scepters that belong to the rest, and shows the Guardians her own scepter, telling them it can function not only as a power source but as a potentially devastating weapon. All of this has been overheard by a spying Fitor. 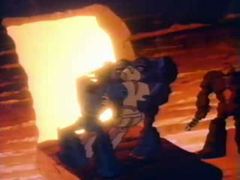 On Quartex itself Magmar and his minions have captured another Rock Lord, with Magmar taking his Scepter and ordering Sticks'n'Stones and Tombstone to feed their captive into the Tumbler at his base, Stonehead. His other followers Stoneheart, Brimstone and Slimestone react with glee as Magmar adds the stolen scepter to his Power Stone and the deposed Rock Lord is killed. Magmar needs just three more sceptres to gain full command of the Power Stone and utter dominance over Cordax. The three in question are owned by Solitaire, Boulder and the Lord of Fossils. They decide Boulder will be their next target, unaware that Granite has been present and waiting for them to leave. He attempts to retrieve a scepter from the Power Stone but it zaps his hand; he then escapes Stonehead in rock mode and reports back to Boulder and his fellow troops that Magmar is planning to attack them next, and Boulder states they will intercept the attack. 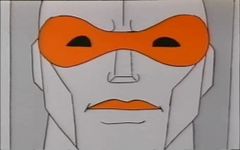 "That's a question you should ask yourself, Cy-Kill."

Meanwhile back on GoBotron, Nuggit warns the Guardians that no planet will be safe if Magmar completes the Ultra Scepter. Fitor returns to Roguestar and tells Cy-Kill of the discovery. The Renegade leader decides he wants the powerful weapon for himself and launches a huge assault on GoBotron with a fleet of Thrusters. The Guardians launch their Command Centers in response, though several are shot down taking off. While the Guardians are busy in the skies over the planet Cy-Kill takes Fitor, Pincher and Bugsie down to find Solitaire and Nuggit. The Renegades find them with just Small Foot, Scooter, Matt, Nick and A.J. for protection. Bugsie captures Nick and A.J. but Solitaire uses her scepter to blast Hornet and Pincher. Cy-Kill knocks her, Nuggit and the valiant Small Foot out however, while Matt goes for help on Scooter. They manage to take Solitaire but Nuggit escapes from Pincher. Using Nick and AJ as hostages Cy-Kill is able to escape when Leader-1, Turbo and Heat Seeker arrive, and Crasher orders the Thruster fleet to head back to Roguestar. 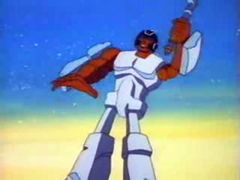 "Quick, to the shuttles!"

Nuggit tells the Guardians that he can track Solitaire - and therefore their kidnapped friends - via the Rock Lord's unique vibrational frequencies, negating Roguestar's stealth technology while causing some jealousy from Scooter. Leader-1 decides a mass attack would be foolish and to instead take a single Command Center to recover the hostages. On Cordax, Magmar is leading his band to find Boulder's stronghold, unaware his rivals are planning an ambush in a steep valley. Simultaneously Cy-Kill and Dr. Go are interrogating Solitaire on Roguestar with the Brainstormer, learning the location of Cordax and deciding to take the ship there to pick up more scepters, unaware they are being tracked by the Command Center, which nearly collides with the huge Renegade ship before it goes into hyperdrive and moves into orbit above the asteroid-surrounded rock planet. Cy-Kill heads down to the surface in his Thruster with Crasher, Hornet, Bugsie, Pincher and the restrained Solitaire. They soon spot Boulder and Magmar's forces locked in battle. Marbles saves Boulder from a sneak attack with his boomerang and Boulder's group soon gain the upper hand. Onboard the Thruster, Solitaire tries to persuade Cy-Kill that Boulder is Magmar but he sees through her and the Renegades join the fight on Magmar's side. Boulder's forces are routed, with only Marbles, Granite, Crackpot and Pulver-Eyes escaping. The Renegades then introduce themselves to Magmar, and after Cy-Kill reveals he has Solitaire's sceptre an alliance is soon formed. 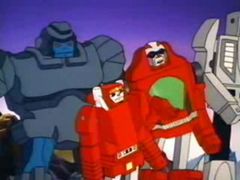 Elsewhere the Command Center is taken out by the asteroid belt and makes a forced landing on Quartex. With few other options the Guardians set out to find Boulder but his group believe all GoBots are the same and surround them - thankfully Nuggit is able to explain the Guardians are friendly before things go too far. The two groups retreat to Boulder's stronghold while Cy-Kill and Magmar search for them in Thruster, spotting Nuggit. Marbles senses they are about to arrive, allowing Leader-1 and Turbo to attack the ship, causing damage before the Monster GoBots set out to engage them. Turbo is shot down by Pincher and Hornet before Leader-1 damages the pair only for the Guardian leader to take a direct hit from Thruster's main battery. With both of their fighters damaged and unable to convert the group are forced to flee the stronghold on foot, ending up escaping down into the Sea of Fire on a rock. Magmar berates Cy-Kill about the perceived loss of Boulder's scepter but the Guardians and their friends have survived, and Scooter uses his boosters to get them to shore but they have to cross Cordax's wasteland and Dark Forest to reach the Kingdom of Fossils, Magmar's next target. 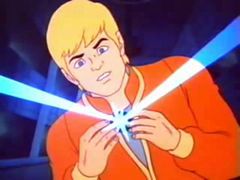 Onboard Roguestar Nick and A.J. are able to disable their cell's infrared sensor and search for Small Foot, soon finding and freeing her. Below, the Guardians and Boulder's troops are attacked by Magnoids. The GoBots are nearly devoured until Nuggit advises them to channel electric jolts towards the creatures, driving them off. As the group trek across the wastelands Boulder and Nuggit tell the Guardians that they were once organic before a catastrophe fused them with rock, though Nuggit himself is robotic and predates the rock people. He was found in one of the planet's dead cities by Boulder's group and repaired, having no memories of his earlier life. The group are further threatened by Rockasaurs until Boulder, Granite, Crackpot and Pulver-Eyes drive them off - though Boulder is forced to use the last of his scepter's power to save Marbles. 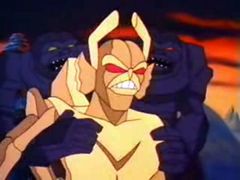 "This trial is a mockery of justice!"

At Stonehead, Magmar and Cy-Kill plan their assault on the Fossil Lord's domain while both sets of troops squabble, with the Renegade still refusing to hand over Solitaire's scepter and extracting a promise to share the Ultra Scepter. Magmar's men are loading their Rock Pot vehicles when Cop-Tur informs Cy-Kill that the prisoners have escaped and disabled the ship's Astrobeam. Fitor is sent back by Space Hawk to help catch them. Small Foot meanwhile disables Roguestar's communications before stealing a Space Hawk themselves and head down to find their friends, who are just entering the Dark Forest. Meanwhile Magmar and Cy-Kill easily rout the Fossil Lord's forces and take his sceptre, though Tombstone suggests sparing him as a warning to others. The villains then return to Stonehead before Boulder and his friends arrive, and the Fossil Lord tells them of Magmar's success. Small Foot then arrives with A.J. and Nick, and they cannibalise the Space Hawk to repair Leader-1, Turbo and Nuggit's damaged jet-pack. 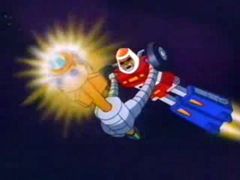 "It will do you no good, Guardian, it cannot be opened."

Magmar meanwhile prepares the Tumbler to dispose of Solitaire but the good guys have a plan. Now able to fly, Nuggit disables the Narlies on sentry duty while the others lay charges around Magmar's Stone Wing and Stonehead itself before sabotaging the Thruster. They then sneak up the mountain, leaving the Fossil Lord outside with the detonator. Magmar adds the Fossil Lord's scepter to the Power Stone, which springs to life and ejects the Ultra Scepter. The Renegades then try to double cross Magmar and the two groups fight, allowing Solitaire to get free and re-join Boulder. The charges are then blown and the Guardians storm Stonehead, adding further chaos to the battle. After blasting Sticks'n'Stones, Cy-Kill takes the Ultra Sceptre and the Renegades run for it. Leader-1, Turbo and Small Foot give chase, while Nuggit shoots the roof supports of Stonehead, dropping the ceiling on Magmar and his gang; Boulder's troops then draw them out into the open. Meanwhile Cy-Kill finds the Thruster wrecked and decides to attack the Guardians with the Ultra Sceptre but is unable to handle the weapon's power. Leader-1 easily dodges the blasts he fires while the rest of the Renegades head back to Roguestar. Taking pity on him, Leader-1 blasts the scepter out of Cy-Kill's hands before it destroys him and allows the Renegade leader to follow his troops in retreat. The out-of-control sceptre then collides with Stonehead, where Magmar notes he still has control of the fortress.

Later the Command Center is repaired and the Guardians and their human friends prepare to leave. Boulder and Solitaire thank them for their help, planning to rebuild Cordax once he is defeated. Leader-1 tells them to get in touch if they ever need help again while Scooter says goodbye to Nuggit and a friendly Narliphant and Marbles says he has a feeling they will be seeing the GoBots again. The Command Center sets a course for GoBotron and home.

There may be other brief cameos on GoBotron that cannot be spotted on the available sources, though the film does use generic models as well. Various generic models are also used on Cordax.

"This guy's as bad as Scooter!"

—Turbo, being harsh on Nuggit.

"Shut up, you old fossil, or I'll have Sticks'n Stones break your bones." 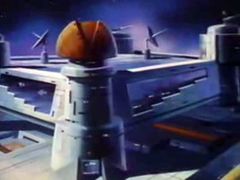 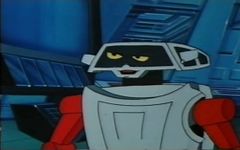 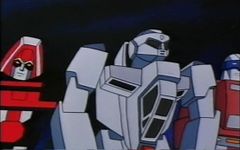 According to BoxOfficeMojo, Battle of the Rock Lords took a gigantic $531,905 at the US box office, which became $1,338,264 after international sales were added. It was the 164th biggest grossing film of 1986, smashing Eight Million Ways to Die firmly into 165th place. It was highly disappointing considering the film showed in 1,045 screens, and the film would be the last released by Clubhouse Pictures. Overseas the film was distributed by Entertainment Film Distributors (UK) and Filmpac Distribution (Australia, where it was renamed Machine Men: Battle of the Rock Lords to tie in with the Machine Men franchise).

GoBots: Battle of the Rock Lords has a score of 20% on RottenTomatoes.

Unlike most GoBots cartoons, Battle of the Rock Lords was released on video several times over. Due to the Clubhouse catalog being subject to different contracts to the TV series, it was even issued by Entertainment in Video in the UK as recently as 1994, and was released in many markets GoBots barely reached otherwise. This meant that for much of the time since the line floundered it was by far the easiest to find and most commonly seen piece of GoBots media.

Ironically, exactly the same rights issues that allowed it to stay in circulation for so long seem to now be a problem; while all of Challenge of the GoBots has been released on DVD by the Warner Archive Collection, the film has yet to be officially issued on DVD. This would seem to be because the Clubhouse Pictures library is now owned by MGM, a rival of Warner Brothers. Several fans have digitized the film from VHS releases, though naturally the picture quality of these efforts is variable due to the age of any VHS source.