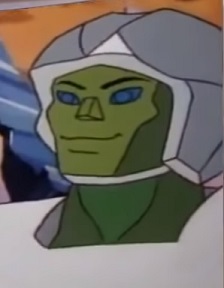 Marbles is a Rock Lord from the planet Quartex. He is on the side of good and is second in command of Boulder's forces. Marbles is highly intelligent. He is also slightly clairvoyant, something he calls future sight, and can sometimes sense that something is wrong or that something is about to happen, although he does not know exactly what. This tells his fellow Rock Lords when to be on guard for the unexpected. He is also said to be able to create illusions in the minds of his enemies.

Marbles was part of Boulder's good Rock Lord army. He was present when Boulder and his forces planned to trap Magmar and his evil Rock Lords in a canyon, a plan which was interrupted by the arrival of the Renegades. Marbles retreated with Boulder's forces and was present when Nuggit brought Leader-1 and his Guardians to meet Boulder. Teaming up with the Guardians he took part in the later battle between the combined forces of the good Rock Lords and the Guardians, against the evil Rock Lords and the Renegades. Following the defeat of Magmar, and the Renegades' departure from Quartex, he wished the Guardians well and stated his belief that they would meet again.GoBots: Battle of the Rock Lords 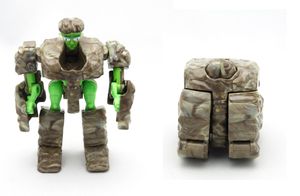 His accessory is the Scanner/ Laser.

Marbles animation model and toy are quite different in appearance. There are photographs of a prototype that appeared in various advertising print media showing a toy with a face much closer to that of the cartoon. It is anyone's guess why the change was made.