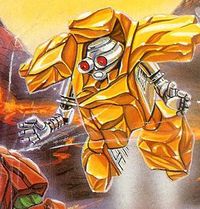 Nuggit is a Rock Lord from the planet Quartex. He is on the side of good and fights against the forces of evil. Nuggit is unique among Rock Lords in that he is completely robotic. He is also the only Rock Lord who can fly as he has a jet pack built into his body. He believes he dates from the time before a great cataclysm changed all the other inhabitants of Quartex into Rock based life-forms, although he has no memory of it. He is small and shy but brave and quite adept at technology. 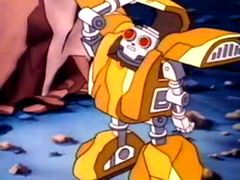 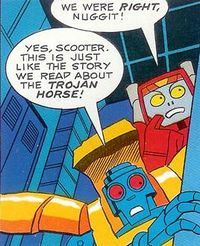 The Good Rock Lords again teamed up with the Guardians on Quartex, with the groups working together to prevent the Renegades from stealing a statue from an ancient city. However as they were utterly useless Nuggit and Scooter were left behind on the Command Center, where they decided to read up on Greek heroes in order to become braver. This turned out to be useful as the story of the Trojan horse made them think that the statue might contain enemies. They sat up all night watching it until it broke open to reveal Magmar, Brimstone and Slimestone, who let the Renegades Cy-Kill, Crasher and Cop-Tur onboard. The pair raised the alarm, allowing the Guardians and Good Rock Lords to defend themselves until Scooter was able to trick the bad guys into walking out of the Command Center and into space. Conquest of the Command Center! Later in the conflict with Magmar, d most of the Good Rock Lords were cornered by Magmar; thankfully Nuggit arrived with back-up from the Rockasaurs Spike Stone and Terra-Roc, giving his friends an opening to fight back and drive the enemy into the retreat. Update from Quartex

Tired of the threat Magmar posed to Quartex, Boulder led his troops out to attack Stonehead. However, they were ambushed by Magmar, who froze them in their rock forms with his new Cryon Ray. Only Nuggit - scouting ahead and clearly doing a bang-up job of it - escaped, following the Evil Rock Lords back to their base, where the Good Rock Lords were imprisoned in a cage. He was able to free them using a secret panel within his chest that projected a beam to knock out guards Stoneheart and Sticks'n Stones, allowing Boulder and his friends to get free. Magmar again attempted to use the Cryon Ray but Nuggit's ray had disabled the weapon as well, so Boulder shot the whole group of Evil Rock Lords over with his Power Sword. Boulder then led them to freedom before reinforcements could arrive - leaving Magmar swearing revenge on Boulder and his followers. Powerful Living Rocks Face a Deadly New Peril He later joined Boulder and Marbles in visiting the Crystal Palace of the Jewel Lords, arriving just as Magmar, Spearhead and Saberstone escaped with Flamestone's new nuclo-crystal.They were unable to prevent the Evil Rock Lords leaving with their prize - or so they thought, Sunstone having switched it with an illusory version. There's Ssomething Flashing over There

Nuggit was one of the Go-Lems on the forgotten planet Earth at the centre of Gobotron,Issue 3 who believed themselves to be built by gods and born from the Earth itself. The group mainly meditated to achieve a state of mind they called the Quartex. However, when Leader-1, Turbo, Scooter and the others searching for the Lazer Lance near Skull Rock came under attack from Magmar's forces the Go-Lems helped, with Nuggit tackling Stoneheart before leaving. The group later appeared to aid the Guardians by opening up a chasm that swallowed up both Cy-Kill and Zod, calling an avalanche of rocks that gave an opening for the Go-Bots to finally destroy the monster. Issue 4 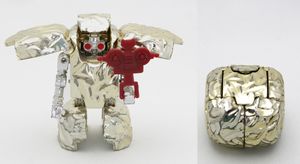 Nuggit was released in the first series of Rock Lords by Tonka and converts from robot to gold rock in 7 steps. The figure was released in Japan as Mecha Rock, one of the Rock Robo in the Machine Robo:Revenge of Cronos toyline, with no significant changes; it is unclear which was the original release. Nuggit has excellent articulation at the shoulders, elbows, hips and knees. In a neat feature, lifting the hood to reveal his head causes his jetpack to move into position. The Tri-Gun can clip over either of the robot's fists. While structurally sound, Nuggit's gold paint can wear off relatively easily.

In Europe, Rock Lords was a subline of Robo Machine. Nuggit was issued by Bandai in 1986, with his Tri-Gun moulded in black plastic rather than the red of the American version.