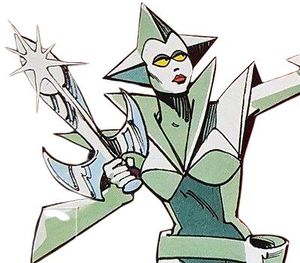 Solitaire is a Rock Lord from the planet Quartex. She is on the side of good and fights against the forces of evil. As the leader of the Jewel Lords she has a high position among the forces of the good Rock Lords and is chosen to travel to GoBotron to seek the help of the Guardians to defeat Magmar and the evil Rock Lords. She is also the holder of one of the power scepters, powerful weapons held by the leaders of the various factions on Quartex. 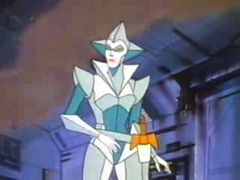 Solitaire travelled with Nuggit to the planet GoBotron, seeking the help of the Guardians in their quest to stop Magmar from conquering the planet Cordax. While on GoBotron, she was captured by Cy-Kill and the Renegades. Taken back to Cordax by the evil GoBots, she was turned over to Magmar and his forces. After the defeat of Magmar and Cy-Kill by the combined forces of Boulder's Rock Lord troops and the Guardians, Solitaire was freed. rejoining her friends. Battle of the Rock Lords

The Jewel Lords operated out of the Crystal Palace on Quartex, where Flamestone devised the powerful nuclo-crystal. Boulder dropped by to check on the device before heading off by Rock Pot - not realising Magmar, Spearhead and Saberstone were lurking nearby, having discovered the Palace when their Stone Wing crashed nearby. She was greatly impressed by Flamestone's further experiments which showed the nuclo-crystal was indestructible. However, Magmar then ambushed them and tied them up. While Boulder returned with Marbles and Nuggit the Evil Rock Lords were able to escape - though the nuclo-crystal was safe all along, having been switched for an illusionary version by Sunstone. There's Ssomething Flashing over There

Solitaire was one of the Go-Lems on the forgotten planet Earth at the centre of Gobotron,Issue 3 a group led by Boulder who believed themselves to be built by gods and born from the Earth itself. The group mainly meditated to achieve a state of mind they called the Quartex. However, when Leader-1, Turbo, Scooter and the others searching for the Lazer Lance near Skull Rock came under attack from Magmar's forces the Go-Lems helped, with Solitaire punching Tombstone. The group later appeared to aid the Guardians by opening up a chasm that swallowed up both Cy-Kill and Zod, giving an opening for the Go-Bots to finally destroy the monster. Issue 4 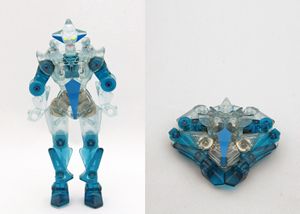 Solitaire was released in the Jewel Lords assortment of Rock Lords by Tonka and converts from robot to diamonds. Solitaire has good articulation at the shoulders, elbows, hips and knees - though the arm movement is restricted by the cowling around the shoulders. The figure came packaged with a copy of the "There's Ssomething Flashing over There" mini-comic.

In Europe, Rock Lords was a subline of Robo Machine. Solitaire was issued by Bandai in 1987 with no significant changes.