Old enemies and mysterious new allies await as the Guardians and their human companions navigate the ruins of the Earth that was. 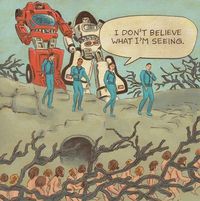 Having breached the ruins of Earth at the center of Gobotron, the four human astronauts now wander through the ruins of New York, surveying what the passage of time has done to their home. Baffled by how so much could have changed in so little time, it's Turbo who reminds them of the fact that their Go-Bot companion Spay-C holds all the answers. At Turbo's insistence, Spay-C tells them the full story: though he was initially pleased by the Go-Bot revolution taking place on Earth, the war quickly turned ugly, and to protect his cryogenically-frozen human partners Spay-C opted not to return to Earth for years until it seemed safe. When Charlotte wonders if they're the last surviving humans, Turbo points them to a nearby valley - now home to a small colony of feral, cavemen-like humans. He and Scooter are the beloved protectors of what remains of humanity; not far away however, Leader-1 and his team take a break from their search for the Lazer Lance as Cy-Kill's Thruster arrives above the ruined city, and Water Walk and Warpath swoop out of the spaceship to capture a gaggle of humans. Turbo hops aboard Spay-C to take to the air, and while Turbo battles Water Walk he urges Spay-C to go after Warpath and his prisoners. Spay-C is downed by a laser blast and unable to prevent them from getting away; Turbo is proud, however, noting that Spay-C did his best to defend humanity. The moment is short-lived, however, as the mighty Zod leaps out of the Thruster, the impact of his landing sending shockwaves across New York and knocking Leader-1 unconscious.

In another vision, Leader-1 is visited by the "Go-Bot god" Courageous, who tells Leader-1 that one day soon the Go-Bots will achieve "communal consciousness." As he awakes, Leader-1 informs his men that he finally knows the way to the Lazer Lance, and sets out to retrieve it. The Guardians only go a short way before they stumble across Scooter, Turbo, and the unconscious Spay-C. Turbo is naturally sceptical of Leader-1 and his intentions, but Leader-1 reminds him that they have a bigger problem in the form of Zod. When Leader-1 draws a pictogram on the ground, Scooter excitedly babbles that he knows the location of the lance - unaware that, not far away, Cy-Kill has just received Warpath's haul of humans, accompanied by two of the astronauts. The journey across ancient Earth takes the Guardians into mountainous uplands, and while Royal-T remains unmoved by this quest, Leader-1 has faith in his vision. The debate is cut short when the heroes are ambushed by a group of monstrous living rocks—only to be saved by another group of transforming minerals. Their rescuers introduce themselves as the "Go-lems", monastic warriors who seek to attain oneness with the Earth itself. Their leader Boulder warns them that, while the Laser Lance lies within the massive skull-shaped mountain, it is a bad place to be avoided. 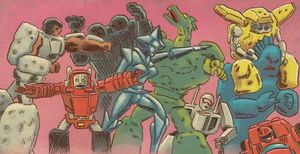 Inside the mountain, the Guardians are greeted by the sight of dozens of Vamp Go-Bots including one that holds the mangled but still-living remains of Braxis. Turbo points out that Braxis intended to kill Scooter's best friend A.J., who grew into an accomplished freedom fighter as the war between humans and Go-Bots tipped in favor of the machines. Turbo accuses Leader-1 as having abetted her death; by ordering Scooter to kill her, the grief drove him mad. Leader-1 defends himself, pointing out that he could've reprogrammed himself like Scooter to relieve himself of the memories and that the story Turbo heard is not exactly what happened. Before Leader-1 can tell him his version of events the group are beset by the Vamps. 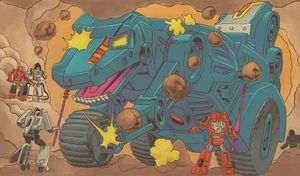 Elsewhere, Cy-Kill and his forces roll across the wastelands until they stumble across the deactivated body of Spay-C. Cy-Kill follows the tracks of the Guardians, while Lee and Venyamin take their chance to escape from Renegade captivity, sneaking into Spay-C to reboot him from the inside. From within Turbo, Charlotte is pleased to see that their friends are alright as the Guardians flee from the Vamps as Scooter transforms and tumbles into a deeper cavern, were he discovers the "big red stick" he's seen in his dreams, held by a massive statue of Courageous. Leader-1 follows suit and grabs the Lazer Lance; the Vamps begin to flee as the Courageous statue separates into separate pieces of armor. Leader-1 wonders if the Vamps fear the lance, but Turbo points out the more obvious culprit: Zod is here. As the Guardians suit up, a lance-wielding Leader-1 sallies forth to battle Zod once and for all; he's reckoned without the arrival of the Renegades, however, and Cy-Kill uses his speedy bike mode to drive by, snatch the weapon out of his enemy's hands, and contemptuously snap it over his knee. The Renegade leader outlines his terms of surrender as Turbo and Crasher trade barbs but Cy-Kill is quickly cut short when a massive boulder bowls into him. The boulder reveals himself as the leader of the Rock Lords, and using their powers over earth the assembled warriors are able to open a massive fissure, sending Zod and most of the Renegades plunging into the chasm. Cy-Kill is left hanging by a finger as Cop-Tur decides to take command; the copterbot is quickly dispatched by Leader-1, however, and in the aftermath Leader-1 issues an ultimatum: he will take what remains of the Lazer Lance into the depths of Earth in the hopes that the shattered weapon will still be enough to kill Zod. All he requests are followers, and he's joined by Spay-C, Turbo, Scooter, the humans, and even the Renegade Screw Head. 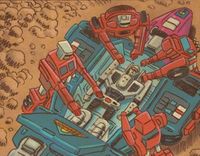 The Guardians head deeper into the Earth, and finally come across Zod in a cavern. The battle is brief, but decisive, and when the monster bites down on Turbo and Scooter, the wounded Leader-1 is able to redirect Zod's momentum to send him hurtling over a cliff; as Zod plummets to his doom, the three Guardians reassemble the lance, spearing him in the eye and allowing gravity to do the rest as Zod lands, blowing him to bits. With Zod vanquished, Screw Head drills a tunnel back up for the triumphant Go-Bots as their Command Center arrives to take them back up to the surface of Gobotron. But it's a trick — the Command Center has been hijacked by Cy-Kill and his Renegades, who open fire on their enemies before engaging a tractor beam to abduct Scooter. The other Guardians cluster around Leader-1's mortally wounded body, with Rest-Q grimly pointing out that there's nothing they can do now. Turbo announces that he's going after Cy-Kill, while the humans and Spay-C agree to do the same. As the Guardians pack Leader-1's body into the center of Courageous, Leader-1's spirit — now resembling the dark angel Eno — watches from afar, as a vision of his long-dead human partner Nick Burns beckons him home.

Characters in italic text appear only in visions or flashbacks.
(Numbers indicate order of appearance.)

"You're beautiful beyond measure, Cy-Kill."
"I should be. I have artisans who hammer out the dents and imperfections in my face every fortnight."

"Little Miss Queen of Darkness."
"Turbo, you heartbreaker. Always in my heart, never in my arms."

"I am Boulder. We are the rolling stones that gather no moss."

—Boulder says it's on