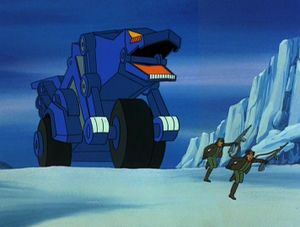 My Zod, my Zod, why have you forsaken me?

Kneel before Zod, a fearsome Renegade superweapon. Possibly a monster, a savage animal, or a mass-produced weapon, Zod's power is the stuff of legends, his anger even more so. His roar echoing across the battlefield is a signal for all Guardians to flee and all Renegades to rejoice.

However, Zod is not invincible, possessing a vulnerable nerve cluster on his underbelly, a strike to which can disable him. Good luck hitting it though.

Left on GoBotron after Cy-Kill had travelled to Earth, the Renegade leader had Zod sent to the organic planet, over Fitor's wishes. Attacking the arctic base so his master could steal the sorium, Zod's fire breath and optical lasers made short work of the Guardians, sinking their Command Center, and trapping them within a mountain. Target Earth As the Renegades set course for Cheyenne Mountain, Zod followed by driving on the sea floor. Conquest of Earth Left to his own devices, Zod went to go munch on some scrap cars at a junkyard. Concurrently, Cy-Kill used the sorium to mind control humanity, having them construct for him a vast fleet of Zods that he intended to launch at GoBotron. With his victory assured, Cy-Kill threw the damaged Leader-1 to Zod. Earthbound The timely arrival of Turbo, combined with his more nimble frame and sharper mind, allowed Leader-1 to defeat Zod, jamming a metal bar into the monster's vulnerable nerve cluster. The fleet of copies launched undeterred but never reached GoBotron as a sorium sample was Astro-Beamed into their flight path, destroying them all. The Final Conflict

Zod was later called in to combat the mutated dinosaur Ichigar, stalemating the beast long enough for Cy-Kill's hypnosis powers to take hold and have it follow Renegade commands. Destroy All Guardians

When trapped on Level 17, Leader-1 and Turbo faced off against a wild Zod. The GoBots That Time Forgot

In a Primax universe observed by Vector Prime, Primax 185.0 Beta, the Decepticon City-Commander Galvatron gathered vast hordes of mind-controlled human slaves using his Hypno-chip Initiative and Decepto-Packs. These slaves constructed a fleet of Zods, who conquered star system after star system, leaving destruction in their wake. The Zods were met in battle by the Quintessons' Terrorcon hordes, cutting a swath of devastation across all of reality. Ask Vector Prime 2015/06/04

In another, Quadwal universe, the toy franchise GoBots surpassed Transformers and became a decades-spanning media empire. In the early 21st century, the GoBots franchise underwent a reboot for both the toyline and the cartoons, producing three back-to-back series called GoBots: Swarm, GoBots: Astro-Beam, and GoBots: GoBotron. They were collectively referred to as The Zod Trilogy, presumably because of Zod's prominent role in the events. By the GoBotic reality classification stream, these events took place on Level 28. Ask Vector Prime 2015/12/21 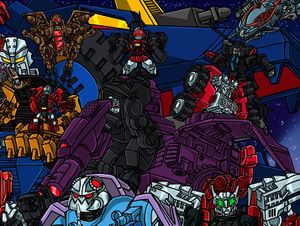 From Axiom Nexus, Cy-Kill crowed about Zod's infinite superiority to Trypticon, believing that his monster could defeat that "tin-plated tinker-toy" of a Titan any day of the week. He went on to boast about unlocking the secret of Zod's construction, allowing him to build more of the great beast. A vast fleet of, admittedly not quite as powerful, Zods was built once to assault GoBotron, but ultimately failed. Renegade Rhetoric 2015/10/16 In describing the value of Destroyer as a soldier, Cy-Kill remarked how he was fearless around Zods. Renegade Rhetoric 2016/10/17 Cy-Kill also described Scales as an attempt at Zod reconstruction. Scales was not as powerful as Zod, but more intelligent and capable of converting. Renegade Rhetoric 2016/10/18

Cy-Kill attacked Fermilab with a pair of Zods, confident they could overcome any opposition. Unfortunately, he neglected to account for a 100 foot tall Scooter, who easily handled and smashed the Zods to pieces. Attack of the 50 Foot Guardian

Using a Time Portal, Cy-Kill removed Leader-1 from history before he could become leader of the Guardians, creating an alternate reality where the Renegades ruled. As a group of Guardians from the original reality tried to undo Cy-kill's machinations, they pressed Cop-Tur for the location of the Time Portal. He accidentally revealed the planet it was on, but then summoned a Zod to menace the Guardians. Renegade Victory Part 1 Unfortunately for Cop-Tur, Van Guard snuck up behind him and stuffed him into the Zod's gaping mouth, trapping Cop-Tur and leaving Zod's threat greatly diminished. Renegade Victory Part 2

During a raid on Cape Canaveral, Zod bit into a space probe containing a quantum supercomputer and received a massive increase in intelligence. Cy-Kill took advantage of the accident to plan an attack on the Guardian drydock in the Procyon System. With Zod and Cy-Kill leading a two pronged assault, they captured the drydock easily, and with it a third of the Command Center fleet.

Unfortunately for Cy-Kill, new intelligence also brought new ambition. While Cy-Kill left to bring Rogue Star to their position, Zod commandeered the Renegades left on the drydock with him, forcing them into an assassination scheme that would eliminate Cy-Kill and his subcommanders, leaving Zod to rule. (Whether Zod required his new Renegades to kneel before him is unknown.) Zod intended to lure Cy-Kill, Fitor, and Gunnyr onto a refitted Command Center loaded with explosives. The Guardians attacked the drydock before Cy-Kill could enter the ship, however, and its unprecedentedly large explosion clued him in to Zod's treachery. Cy-Kill and Leader-1 joined forces against Zod, Astro-Beaming in to his location for a final battle. When Zod tried to set off the drydock's self-destruct mechanism only to have it explode in his face, however, the bestial and uncomprehending Zod returned. Cy-Kill tried to turn on Leader-1, but the Guardian Tail Pipe jettisoned the Renegades out into space. In Zod We Trust

Zod joined Cy-Kill's command team in attacking the Ingot Ampitheater on Quartex during the treaty signifying a tri-planet alliance. He was disposed of by Courageous, who grabbed Zod by the tail and hurled him into the horizon, far from the battleground. Combiner Wars Part 1

While escaping Earth in their Command Center, Kup entertained the Dinobots with stories about Zod and Scales. Echoes and Fragments

The true origins of Zod are lost to time. What is known is that, sometime after Leader-1 had led the Go-Bots to conquer Earth and rebuild it into Gobotron, Zod became a menace to society. He attacked the highways, facing off against Leader-1 many times, but always managed to escape with his life. After Spay-C had touched down on Gobotron, Leader-1 was shown a vision of the Lazer Lance by the Dark Angel Eno, the one weapon that could kill Zod. Concurrently, Cy-Kill tamed Zod with Go-Bot sacrifices. With Zod reinforcing them, the Renegades attacked the Command Center before it warped away. Go-Bots #3

When the group arrived on the shattered remains of Earth, "the Heart of Gobotron", Zod was deployed. After finding the Lazer Lance, Leader-1 charged Zod only for Cy-Kill to break the weapon. When the Rock Lords arrived, their geomanipulation caused Zod to fall into a chasm. As he fell, Leader-1, Turbo, and Scooter rebuilt the Lance and thrust it into Zod's underbelly, killing him. Go-Bots #4