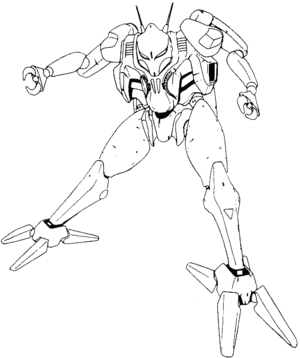 Casmodons are armed with Devil Sonic Cannons, Casmo Masers and Bind Swords, and specialise in ocean and swamp combat.

Media featured multiple versions of Casmodon; for the sake of convenience all are listed here 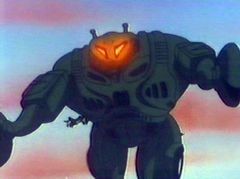 The transdimensional villains from the Casmozone controlled huge armies of Casmodon, Zarios, Falgos, Gildis and Baldas minions. They were opposed by the Machine Robo, shape-shifting robots from Romulos. After a long struggle they destroyed Romulos and set their sights on Earth. However they were opposed once again by the Machine Robo, who hid among Earth's vehicles to oppose them. Machine Puzzler A massed attack on Earth was thwarted by Machine Robo, Devil Invaders and another was stopped by Battle Armor 5. Battle Armor 5

Casmodon was built on Earth by Zod and forced human leader as the first of his planned Devil Invaders. Once completed the gigantic robot was sent after the Guardians and began devastating a suburb of London. The Guardians attempted a massed attack but their combined fire did not phase Casmodon and his eye-beams destroyed Night Ranger and Truck when the Devil Invader returned fire. He further injured Dozer and drove the surviving Guardians in full retreat. However he was undone when he captured the human Charlie Bampton; the boy was able to trigger an unexpected mid-air conversion, forcing Casmodon to crash and allowing the Guardians to escape to the Command Centre. The Robo Machines, Story 2 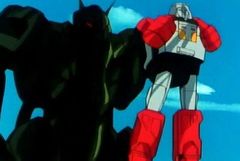 Casmodon was a Gyandlar captain sent to oversee a mine take-over in Dakota, where he was involved in the act of sabotage that led to Dakota and its' neighbour Konan as a cover for mining operations to search for the Hyribead. Casmodon was able to take advantage of the grief of Dakota's chief Bison and manipulate him, throwing suspicion on Rom Stol, Leina Stol, Blue Jet and Triple Jim when they arrived in town. However, Bison's son Combat Buggy and Rod Drill were able to expose the conspiracy and lead an uprising. Casmodon fought Rom and then Kenryū, and seemed to be gaining the upper hand due to his vehicle mode - until Baikanfu was called upon and destroyed the Gyandlar. Pledging Love on the Great River

Later massed numbers of Casmodon were one of the five Gyandlar Devils used by the Gyandlar. Seemingly entirely robotic, these were routinely destroyed and later rebuilt on the Gyandlar mother-ship. One was placed on guard duty in Cleo City to oversee the imprisoned Rom and Sara, and suffered the indignity of being kicked off a building by Leina. The Heart of a Protecting Angel Casmodon later helped Diondra guard the captured Machine Robo from Java's village. Rockgiran versus Rockdon While one was destroyed attacking a convoy bound for Emerald City when it was forced onto the Red Sands approaching the city, Casmodon was a regular face in the Gyandlar attacks on the city. Gather All Machine Robo 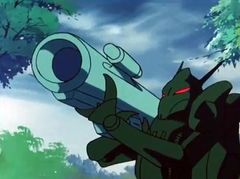 Casmodon was one of the Gurendos who wiped out R. JeTan's old unit back in the mists of time. R. JeTan! Run! Later, Casmodon was one of Gurendos guarding Kariagen's plans to take over a mine on Electronic Planet B-1, and attacked the Blue Dragons when they planned a rescue mission. However, the Winner Robo then arrived, flattening Casmodon and his comrades. A New Machine Robo Team Appears! When Sorikondar tried to pin down the Battle Hackers but R. JeTan led a breakout. Casmodon and Gildis restrained the Battle Hacker so Sorikondar could kill him with a sword; however, R. JeTan slipped away and Sorikondar instead cut his pair of goons in half. R. JeTan! Run! 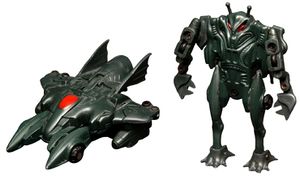 Casmodon was the 1st figure in Bandai's Devil Invader Series and transforms from robot to monster vehicle of fictional design in 6 steps. For a toy of a small size of the period Casmodon has excellent articulation, with moving shoulders, double elbows, hips and ankles. Sadly the robot mode's antennae are prone to snapping off.

Casmodon was issued as part of Robo Machine, with no significant changes.

Casmodon was reissued for the Machine Robo: Revenge of Cronos toyline in updated packaging. The figure was assigned to the Gyandlar Devils, and featured no changes from the original Japanese release.

An unpainted version of the model.

A plastic model kit version of Casmodon was issued by Bandai in 1985 as part of their Machine Robo Series line of Gashapon. Casmodon was part of the second series and retained his ability to transform. The model very closely followed the transformation of the Machine Robo Series version; while it included some stickers for detail the kit itself was cast in a single colour of plastic and would require extensive painting to look anything like the picture included on the leaflet.