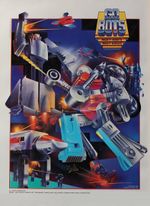 The second series of GoBots toys continued, with the combining Power Warriors and Puzzlers, the playset Thruster and the monster Scales among the additions. Meanwhile six figures were made for the fast food chain Wendy's. These figures saw the factions Guardian and Renegade used on toys for the first time, while the Power Warriors even used faction insignia - though it didn't really catch on, and only a handful of other toys would use them.

The third series began shipping in the fall of 1985. With Bandai releasing less Machine Robo toys, Tonka were running low on figures for GoBots. Thus the third series of GoBots consisted of a handful of imports from the Japanese line, a group of rejected Machine Robo designs Tonka purchased from Bandai and a batch of specially commissioned Super GoBots toys. The latter were among the first figures to include character biographies on their boxes.

Sales continued to excel, reaching $132m - more than half of Tonka's sales revenue for the year. Profits were further boosted by a slew of licenced products sold by the likes of ARCO, Playtime, Western and many more. 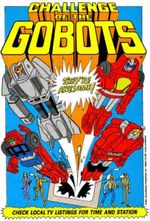 Main article: Challenge of the GoBots

The Challenge of the Gobots cartoon series began broadcasting on September 23, with 60 new episodes. It largely retained the trappings of the mini-series, with some casting changes. Jeff Segal became story editor alongside Kelly Ward, who did double-duty alongside voicing Fitor in the series. While a second five-part mini-series, "The GoBotron Saga", was included partway through the run the majority of episodes were standalone, exceptions being the two part "Invasion from the 21st Level" and "Renegade Rampage".

Leader-1, Turbo, Scooter, Cy-Kill, Crasher, Cop-Tur, Matt, A.J. and Nick remained the focus of most episodes, while Small Foot, Fitor, Path Finder, Blaster, Vamp, Scorp and Pincher were among the more frequent guest characters. Braxis and Anya became occasional guest characters with NASA becoming UNECOM. A wider range of guest stars was drawn largely from the second series of toys, with some from the third series getting into the last handful of episodes - albeit often not in their final colours due to the production lead-in.

Added to the five episodes of the original mini-series this gave a total of 65 episodes, enough for a 13-week syndication run with the episodes airing Monday to Friday.

Western Publishing Company used their Golden Books imprint to publish a series of four illustrated storybooks, loosely based on the TV show.

Machine Robo continued to be a success, with the Machine Robo Series and Devil Invader Series continuing. Indeed, by 1985 the range had sold 13m units, a landmark celebrated by the Machinerobo World Campaign. The franchise also introduced the Big Machine Robo and the combining Machine Puzzler. Meanwhile the franchise's mythos - still largely expressed through features in TV Land - was heavily overhauled to feature the Devil Invaders.

In response to the success of GoBots, including the arrival of Challenge of the GoBots on both VHS and television, Bandai made attempts to tie the line into the GoBots branding, with GoBots stickers added to many figures and cardbacks carrying the clumsy legend Challenge of the GoBots - A Robo Machine Product. Bandai also imported figures from other robot lines under the Robo Machine branding, including the Winchers, Robot Arm Machine, Robo Kong and Godaikin.

Challenge of the GoBots began airing in Europe, most notably in France. In the UK it aired in 5-minute segments during Wacaday, ITV's holiday morning children's TV strand.

The Robo Machines comic strip continued until 12 July 1985, still written by Tom Tully and drawn by Kim Raymond. The second arc of the serial featured a distinct rising influence from Challenge of the GoBots, with the introduction of Turbo and Scooter and removal or revision of some of the more contradictory elements.

World Distributors produced a series of four storybooks under their Mini World imprint based on the franchise, featuring some very tentative elements of Challenge of the GoBots. The autumn of 1985 saw publication of the first Robo Machine Featuring the Challenge of the GoBots Annual, also by World Distributors, this time drawing most of its' inspiration from the initial cartoon mini-series.