Robo Machine was a toyline distributed by Bandai, which ran from 1983 to 1988 in Europe. The primary rival of The Transformers in the European toy aisles of the mid-1980s, the line initially consisted largely of figures from Bandai's Japanese Machine Robo series. The line evolved considerably over its life. After starting out as a straight import of Machine Robo the brand changed direction when Challenge of the GoBots began airing on the continent, leading to a shift towards Tonka-based names and an attempt to blend the two names together as Challenge of the GoBots - A Robo Machine Product. 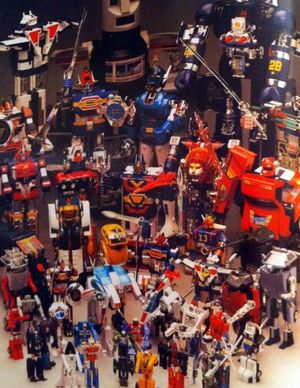 Thanks Bandai, that really helps.

Another feature of Robo Machine was that Bandai used it as a general catch-all for any robot toy they released in Europe, meaning the banner included figures drawn from Winch Robo, GoDaiKin and other even stranger places. As such this article is at the time being is best classified as accurate but not exhaustive. Adding into all of this Europe also got unsold GoBots stock shipped over, especially Super GoBots, in Tonka packaging and sold through clearance outlets, especially after the end of the US line.