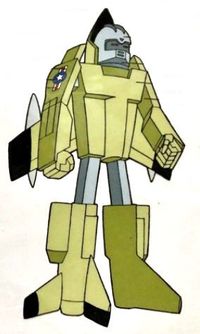 Mach-3 is a Guardian. As one of their newer recruits he's happy to learn the finer aspects of air combat under the tutelage of Leader-1.

Mach-3 was assigned to the joint Guardian/UNECOM Star Fortress as it was commissioned. When the station was infiltrated by Renegades, Mach-3 joined Twister and some UNECOM troopers in trying to defend the Quantumite onboard from capture. The Guardians were stymied when the Renegades were able to turn their human allies' weapons against the pair.The Secret of Halley's Comet He was later providing security for a convoy of ore gathered from a barren planet to continue construction work on GoBotron. However, he and Leader-1 were drawn away when Gunnyr and Sky-Jack attacked, forcing the material to be jettisoned; Mach-3 was hit in the fighting but caught by Leader-1's forcefield. He recovered sufficiently to join Leader-1, Ace and Bolt in drawing the Renegades' Thruster fleet into a trap above GoBotron, where most of the enemy ships were destroyed, and was present at the Guardian Council meeting where the Guardian victory was celebrated.Mission: GoBotron 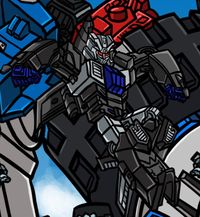 During the Diaspora, Mach-Three was dispatched to Level 63 along with an assortment of Guardians and Renegades. Cultural Appropriation

After Cy-Kill's initial failure on Earth with his Zod fleet, Mach-3 and two Guardian Command Centers managed to locate Cy-Kill near Galleon. Mach-3 was seriously injured while fighting against Cy-Kill's Thruster, but Cy-Kill was captured. (Unfortunately, this was all part of Cy-Kill's plan to free his fellow Renegades from the inside of the Prison Moon of GoBotron.) The Long Game Mach-3 and Night Ranger encountered the Robo Rebels when they broke free of the Gobotron Stockades to clear their names. Bent Wing and Mach-3 engaged in some dogfighting before the Rebels eluded their pursuers. Fugitives

As Sideways and Gong played with mingling universal streams, Vec-Tor caught wind of their antics and tracked down Sideways. The Cybertronian attempted to flee the old bot, but instead ran into Mach-3 and Bullet, who apprehended him. Echoes and Fragments 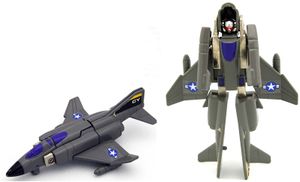 Mach-3 was released by Tonka in the third series of GoBots, and converts from robot to McDonnell Douglas F-4 Phantom II in 6 steps. The toy was a recolour of Phantom Robo from Machine Robo, with a new grey colour scheme, USAF markings and a slightly blunter nose. Sadly the toy is one of the more disappointing GoBots jets, featuring a very simple conversion and an awkward robot mode configuration. 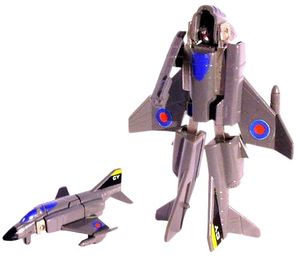 The European version of Mach-3 closely followed the GoBots release, apart from substituting RAF markings for the USAF ones on the North American toy. However, the card art and some catalogue photography used the American version. Like many European versions of the third series GoBots, he is much easier to find in the European markings.

The Australian release of Mach-3 was the same as the European version, and released as part of the ninth series of figures. Also like the European version the card pictured the GoBots version with USAF markings, but only the RAF variant was released.