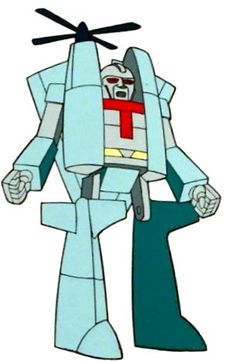 Ace is a Guardian. Or at least he was, before he got lost on GoBotron's dreaded level 17 and came under the control of Gunnyr and Bug Bite. Not that he lets having to lobotomise visitors affect his chipper demeanour.

At some point Ace ended up on GoBotron's Level 17, where he was brainwashed into working for the self-styled Lord High GoBot Gunnyr. His memories of the world outside level 17 were wiped and the amiable GoBot went to work in the Brain Drain Chamber, where performed the same modifications on others under Gunnyr's control - oblivious to this not being a nice thing to do. When Scooter followed a signal down to level 17 and was captured the small Guardian desperately tried to convince Ace there was more to GoBotron and the universe than Level 17. Eventually he was able to persuade Ace to not go through with the DXing process, and the pair were able to escape Gunnyr's castle and get to the Crystal Mountain, the source of the machinery that allowed Gunnyr to suppress the abilities of his visitors. There, Scooter realised Leader-1 and Turbo had followed him down to the lower levels but were being attacked by Gunnyr's lieutenant Bug Bite. Ace helped Scooter to destroy the devices in the Crystal Mountain that overrode GoBot weapons and powers, allowing Leader-1 and Turbo to fight back properly and overthrow Gunnyr. Ace and fellow Level 17 refugee Dart were then taken up to the surface of GoBotron and put through the Modifier before joining the Guardians. Ace was given a fighter plane as his vehicle mode.The GoBots That Time Forgot 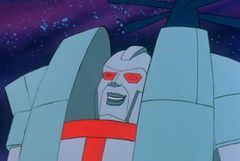 With the Renegades causing heavy losses to Guardian convoys of repair material for GoBotron, Ace joined Leader-1 in escorting a shipment of huge metal panels harvested elsewhere to the planet. Ace was spoiling for battle and soon got his wish as Gunnyr, now one of Cy-Kill's troops, and Sky-Jack soon appeared. However, after they drew off the escorting Guardians, Thrusters appeared and caused heavy damage to the Command Centers towing the material, which fell down on GoBotolis below. Dart's Command Center controlled the planet's defences but he was knocked out by debris; thankfully Ace was able to return, board the ship, rescue Dart and activate the defences before too much damage had been caused. Leader-1 then decided to trick the Renegades into a trap to annihilate most of their fleet; Ace set off with Leader-1, Bolt and Mach-3 to draw them into range of a large squadron of Command Centers. While Ace himself was shot down the plan was a success, with more than three-quarters of the Renegade fleet destroyed.Mission: GoBotron

Despite being marketed in the Machine Men toyline as a Friendly, the mini-comic portrayed Ace as an Enemy for unknown reasons.

Along with Sky-Jack and Pincher, Ace chased after the Friendly Machine Man Hans-Cuff on Earth, causing him to crash with their fire. The trio of Enemy Machine Men then turned their firepower on Turbo. Challenge of the Machine Men 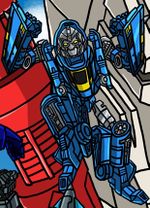 During the Diaspora, Ace was dispatched to Level 51 along with an assortment of Guardians and Renegades. Cultural Appropriation

From Axiom Nexus, Cy-Kill bragged about the vintage style of various GoBot alternate modes, including Ace's World War II fighter form. Renegade Rhetoric 2015/10/14 He also recounted Dart and Ace's encounter with Gunnyr on Level 17, shortly before they joined the Guardians. Renegade Rhetoric 2015/10/15 Ace was one of the Guardians who fell under Renegade control when Doctor Braxis's new Destabilizer Cannons also subverted his will. He acted as a lookout with Spy-Eye at the captured UNECOM base. Once Braxis Twice Shy Part 2

Ace was a member of the Guardian team who confronted the Autobot Spy Changers as they arrived on Strata 22. They captured Silverstreak before learning the Spy Changers were not a new form of Renegade. Brain Problem Situation

As Sideways and Gong manipulated quantum strings to tie together two universal streams, the Decepticons staged an all-out assault on Guardian City on Earth. In defense of the base, Ace was destroyed fighting Starscream alongside Spy-Eye and Royal-T. Echoes and Fragments 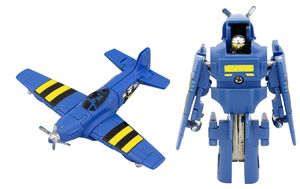 Ace was released by Tonka in the third series of GoBots, and converts from robot to North American P-51D Mustang fighter aircraft in 6 steps. Initially designed by Bandai for the Machine Robo line, the figure was unreleased until the prototype was used by Tonka. As such, the figure was never released in Japan. While Mustangs served in all sorts of weird and wonderful colour schemes the nearly-all-blue example Ace turns into seems to have been an invention of Tonka, probably dictated as much by keeping costs down as anything else. In a neat touch as side-effect of his transformation Ace's main landing gear can be folded up or down in Mustang mode. Ace has decent articulation in the shoulders and due to his wings pegging back fully for his vehicle mode is less vulnerable to wear than some other aircraft GoBots. However, the paint on the fighter canopy, the under-wing drop tanks and on the propeller is thin and prone to wearing off. The propeller itself is made of soft plastic, which tends to stop the blades from snapping off - though they can still bend, which only speeds up the paint coming off. Ace's final colour scheme was presumably the result of a late decision, as the card art clearly shows the toy being mainly white.

Robo Machine Ace was released in Europe in 1985 with no changes from the American release.

Machine Men Ace was released in Australia in 1985 with no changes from the American release.

The figure was reissued by Bandai in Europe during 1993 as part of the first series of Robo Machines. For trademark reasons the figure was renamed simply P-51. Sadly, like most of the Robo Machines figures P-51 uses poor quality materials and suffers from mould degradation, and also has poorer quality stickers. It has at least contributed to making the toy considerably less rare in Europe than it is in America. 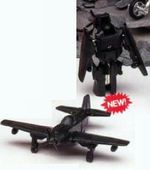 "New" has never been so accurate.
Retrieved from "http://gbwiki.shoutwiki.com/w/index.php?title=Ace&oldid=20975"
Categories: