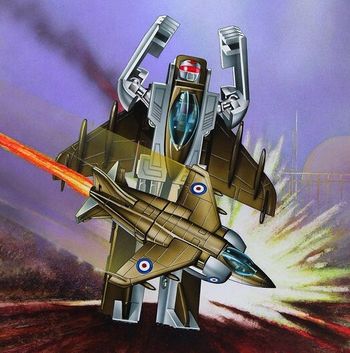 Royal-T descends from GoBotron's Royal Family, and joined up with the Guardians out of a sense of loyalty to his planet and his own sense of adventure. 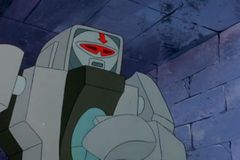 Royal-T and Street Heat were Guardian soldiers assigned to prison duty at the facility on Elba. After Cy-Kill was captured, his superior willpower burnt out the Brainstormer while trying to extract Renegade secrets, so he was imprisoned on Elba for a week while the upgraded Brainstormer on GoBotron was prepared. Street Heat and Royal-T grumbled about their tedious guard duty, and Cy-Kill took advantage of their attitude. Combining hypnotic rays from his eyes with his natural charisma, Cy-Kill managed to bring the two Guardians over to his side. They attacked the other guards Heat Seeker and Van Guard, and seized control of the prison facility. When Turbo arrived from Earth to check on security, Royal-T shot at him and his fellow Guardians. The mesmerized Guardians were left on Elba to guard Turbo while Cy-Kill took the Command Center back to Earth as a Trojan horse. Turbo and the Guardians escaped, and the traitors Street Heat and Royal-T were apprehended. Escape from Elba

This is what happens when he tries to be nice.

Royal-T was built onboard the Command Centre and rapidly deployed along with Carry-All when the gigantic Zod attacked the Security Forces. They found the monster's armour difficult to pierce; a full-strength blast from Royal-T eventually caused a little damage but he was immediately shot down by Zod and fell to Earth, managing to switch to robot mode to lessen the impact before he crashed into a playground, soon gathering a crowd of children. Their attack had given the Command Centre a chance to escape as Zod had been too damaged to chase it, while Carry-All landed to attend to Royal-T's wounds. He was able to persuade the throng of kids he meant them no harm and they even suggested an abandoned railway tunnel where the two Security Forces Robo Machines could rest up. Once under cover Carry-All was able to patch up Royal-T's wounds but noted his comrade badly needed a fresh supply of lubricant from the Command Centre. Unable to raise the ship on his radio, Carry-All set out to search for his fellow Guardians but inadvertently stumbled onto the junkyard that had become the Renegades' latest base of operations, and he was mortally wounded by Cy-Kill and Zod. Seeing as Carry-All died before he could let any of the other Security Forces know where Royal-T was, that his comrades then had to deal with battling Casmodon and then left Earth for Robotron things didn't look good for Royal-T. The Robo Machines, Story 2 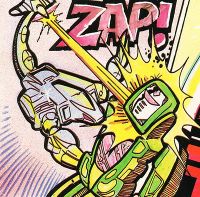 Royal-T was one of the Friendly Machine Men native to Earth when it was targeted by the Enemy Machine Men of Robotron, led by Cy-Kill. Despite Leader-1 devising robot modes for the Machine Men the first attack was a rout. Royal-T was among those who regrouped at the Command Centre and prepared for a counter-offensive, though there were questions over whether he, Scooter, Dozer and Turbo had what it would take to push back the Enemy Machine Men. Space Wars Later in the conflict he was zapped by Scorp. The Combat

Royal-T travelled to the Arctic with Leader-1 to investigate Renegade signals. However, when they arrived they found what they thought were Crasher and Cop-Tur were actually holograms, part of a Renegade plan to draw the Guardians away so they could kidnap Anya Turgenova. However, Scooter and Matt Hunter were able to get to the convention in Desert Springs to warn her, and together they turned the tables on Doctor Braxis. The Aliens Steal a Scientist He later joined Dumper and Dozer in saving Leader-1 and Rest-Q after they had been locked in vehicle mode by Braxis' Freezer Beam. Battle of the Beams When the Guardians captured Braxis and learnt of the Renegade plan to use the Exploding Toads of Primus to take over the population of Earth. Royal-T then tracked Fitor to England, intercepting the toad he dropped and jetting clear before the Renegade could respond. The Exploding Toads of Primus He later joined in battling the Renegades in a jungle. Scooter Strides Out

However, Royal-T later betrayed the Guardians and joined the Renegades, forming part of the army summoned to Mauna Mauna by Cy-Kill. The Battle at the End of the Earth

During the Diaspora, Royal-T was dispatched to Level 59 along with an assortment of Guardians and evil Rock Lords. Cultural Appropriation 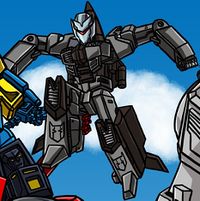 From Axiom Nexus, Cy-Kill recalled the time he mesmerized Royal-T and Street Heat into helping him escape from Elba. Cy-Kill cited it as an example of why mind-controlled soldiers were a poor substitute for willing converts. Renegade Rhetoric 2015/11/24 Using the Power Suits, Royal-T, Treds, Road Ranger, and Dozer formed Courageous in order to deter Cy-Kill's monstrous new combiner named Monsterous. One Born Every Minute

When the Autobot Spy Changers first arrived on Strata 22, Turbo mistakenly assumed they were Renegades. Royal-T was one of the Guardians he assembled to attack and capture the Spy Changers. Brain Problem Situation

As Sideways and Gong manipulated quantum strings to tie together two universal streams, the Decepticons staged an all-out assault on Guardian City on Earth. In defense of the base, Royal-T was destroyed fighting Starscream alongside Spy-Eye and Ace. Echoes and Fragments 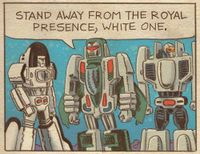 Royal-T was one of the Go-Bots that joined Leader-1's army to face the Renegade uprising on Earth.Issue 2 Even after Leader-1 then decided to install himself as king of Gobotron he remained one of his most fanatical followers; while he helped drive Zod away from attacking Spay-C he was furious when the newcomer stood too close to his leader. He later joined Leader-1, Spay-C, Path Finder and Heat Seeker in combating the flying Renegades who attacked the Command Center, ultimately buying Tic Toc time to navigate a course into hyperspace. Issue 3 He later joined the party who returned to Earth to search for the Lazer Lance, earning a mild rebuke from Leader-1 for questioning the wisdom of following a brain-damaged Scooter. Indeed, Scooter led them not only to the Lazer Lance but the Go-Bot god Courageous, and Royal-T donned one of the suits of armour that formed Courageous' limbs for a showdown with Zod. However, after the monster's defeat he was one of the Guardians shot by the Command Center's weaponry after Cy-Kill took control of the vessel; it is not known if he survived. Issue 4 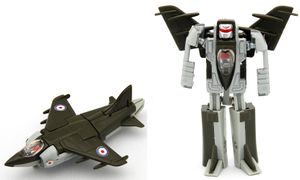 Royal-T was released by Tonka in the first series of GoBots, and converts from robot to Hawker Harrier GR.1 fighter jet in 4 steps. The toy was a repackaging of Harrier Robo from Machine Robo, with no significant changes but omitting the extra sticker sheet of the Japanese release. The jet mode features retractable undercarriage, with the central wheel wide enough to compensate for the absence of outrigger wheels and allow the toy to balance properly. Royal-T also has shoulder, hip and foot articulation; due to the shoulder ball-joints being all-metal he is less prone to wear than many of his contemporaries.

An unchanged Royal-T was included one of Tonka's Guardian Gift Pack #2 sets, with similarly unchanged versions of Hans-Cuff and Dive-Dive. 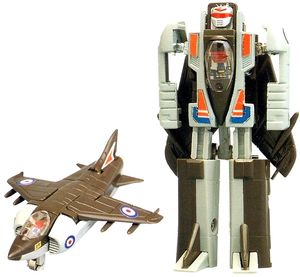 A carded repackage of Harrier Robo, the figure now known simply as Harrier was released by Bandai Europe in 1984. The European version included the extra sticker sheet of the Japanese release, with additional details for both modes. While he was never reissued, catalogs and packaging from 1985 onward listed the toy under his GoBots name.

The third toy from the third wave of figures, Harrier Man was released by Bandai Australia in 1983. He remained identical to the original Harrier Robo toy, albeit packaged on a blue backing card.

The figure was reissued by Bandai in Europe during 1993 as part of the first series of Robo Machines. For trademark reasons the figure was named simply Harrier in the British market once again, with localised versions of the name used in other markets. Sadly, like most of the Robo Machines figures Harrier uses poor quality materials and suffers from mould degradation.

Produced by Monogram, Royal-T was a plastic snap-fit model kit that once assembled could convert from 3"-tall robot to Harrier jump jet with a friction motor. The origins of the kit are difficult to ascertain, with the only definite conclusion being that it wasn't designed as Royal-T, and hence has only a passing similarity to the character's other toys. Instead it closely resembles the Harrier Jump Jet figure from Buddy L's competing Robotron line; which figure came first and how the design came to be sold by two rival manufacturers in the same market at the same time is unknown. While the model didn't include glue and came with stickers it was cast in white plastic, and would requite paint to look anything like the pictures on the box.