The Guardians finally capture Cy-Kill, but can they keep him? 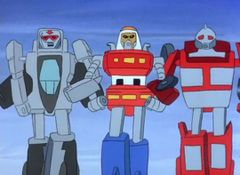 Cy-Kill, Geeper-Creeper and Block Head are pursuing Turbo and Scooter through a canyon on Earth but it's a trap - Leader-1, Path Finder and Heat Seeker are waiting. The Renegades try to escape but Cy-Kill manages to get wedged in a pillar. They take him back to the Command Center but the Brainstormer is unable to deal with his power, burning out. The Guardians have to return the device to GoBotron for modifications but Crasher and Cop-Tur then launch a rescue attempt but without their leader they don't fare well. However they are able to slip away in stealth mode. Meanwhile back on Roguestar, Fitor berates Geeper-Creeper and Block Head for losing Cy-Kill, but has at least discovered that his leader has been taken to the top-secret prison on the planet Elba. Cy-Kill will be kept there for a week while the new Brainstormer is prepared. Turbo deposits him on the barren planet with guards Heat Seeker, Van Guard, Royal-T and Street Heat - and the latter pair think little of the assignment. Fitor meanwhile contacts UNECOM requesting amnesty for himself and Geeper-Creeper; Leader-1 believes it to be a trick but their promise to also hand over a Thruster and a stealth device is tempting to General Newcastle, Matt Hunter and Anya Turgenova. Meanwhile on Elba Cy-Kill begins playing on how disgruntled Royal-T and Street Heat are, ultimately taking over their minds. 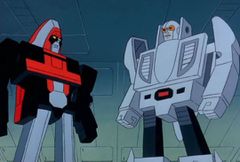 On GoBotron Path Finder tells Scooter they are receiving a distress call from Elba. It's been sent by Van Guard and Heat Seeker before they are driven away by Royal-T and Street Heat, who assure Scooter nothing is wrong, blaming an ion storm. However, Scooter is suspicious - and with good reason, as Royal-T releases Cy-Kill from his cell. He chases after Van Guard and the injured Heat Seeker, blasting them both. Meanwhile on Earth Fitor and Geeper-Creeper have arrived with the technology promised, demonstrating the stealth device on Anya. Spay-C then arrives with a message from Scooter, asking Leader-1 to head to GoBotron and help test the Brainstormer as he is the only GoBot as strong as Cy-Kill. Leader-1 also shares Scooter's belief something is wrong on Elba, so he sends Turbo, Spay-C Hans-Cuff and Matt with Fitor and Geeper-Creeper to investigate - believing it will be a good chance to test their real loyalties, and fitting them with restraining bolts. However, Fitor has a tracker hidden in his leg and Command Center 2 is followed by Crasher and Cop-Tur. When the Command Center lands they are ambushed by Cy-Kill, Royal-T and Street Heat. Fitor meanwhile signals Cop-Tur and the Guardians are soon overwhelmed. 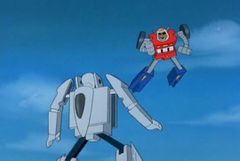 General Newcastle receives a message from Turbo on Elba stating everything is under control - but it's actually Cy-Kill mimicking his voice, saying he will be returning Cy-Kill to Earth as Elba's security has been compromised. He locks Turbo up and prepares to use the Command Center to sneak past Earth's defences, having also mesmerised Hans-Cuff and Spay-C. When the General passes on the news to Leader-1, who wonders why Turbo has made such a big decision without clearing it with him. Cy-Kill meanwhile boards the Command Center, leaving Royal-T and Street Heat to guard the prisoners. Once the ship has gone Turbo lets Matt out, having hidden the human in his chest. He removes the restraints from Turbo, Heat Seeker and Van Guard and they escape, soon chasing off Royal-T and Street Heat. They also find an old Astrobeam. Cy-Kill arrives at UNECOM Headquarters but Turbo is able to get a message to him but the Renegades spring into action, blasting their Guardian hostages. Just then Leader-1 and Scooter arrive in Command Center 1. Leader-1 is hit by fire from the Renegades but Turbo revives in time to help. He blasts Fitor and Geeper-Creeper and grabs his commander while Scooter shoots Cy-Kill with the Command Center's weaponry and the Renegades retreat. Meanwhile Anya has found the stealth device has broken after only two uses. Turbo, Leader-1 and Scooter muse on what they've just been through - before Turbo belatedly realises he's left Matt on Elba... 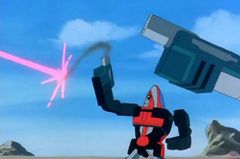 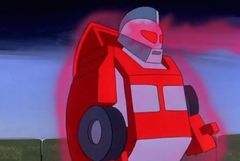