Cop-Tur is Cy-Kill's favorite blunt instrument. A consummate thug, Cop-Tur has been dedicated to the Renegade cause for centuries, even longer than their current overlord. Cy-Kill won Cop-Tur's loyalty early on, however, and so the malicious helicopter has been his devoted servant ever since. Cop-Tur loves to chop things up with his rotor blades, living or otherwise, and his dutiful love of mayhem has helped form a tight bond between him and his long-time ally, Crasher. In many ways, he's the perfect Renegade: vicious on his own, devoted to the cause, and just bright enough to follow orders correctly without questioning them. His eagerness to please always brings a smile to Cy-Kill's face. This is fortunate for Cop-Tur, since he's also a bit of a klutz and his bumbling can exasperate Cy-Kill just as easily. 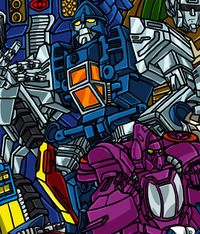 When the Autobot Spy Changers arrived on Strata 22, Cop-Tur was one of Cy-Kill's Renegades who helped drive off the Guardians during a misunderstanding between them and the Spy Changers, and tried to forge an alliance with the dimensional invaders. Brain Problem Situation 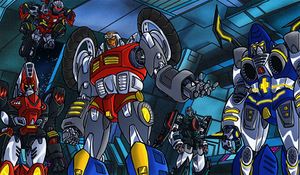 Cop-Tur was present at the Renegade base when Snoop returned from her scouting mission on the Autobots. He clumsily played back her recording of Optimus Prime's mission plans to Earth.

As the Renegades intercepted the Autobot Command Center on its way to Autobot City, Cop-Tur assumed the vessel's controls along with Crasher, Psycho, and Slicks. Echoes and Fragments

A straight import of the Machine Robo Gyro Robo toy, one of the original batch of Machine Robo figures designed by Popy prior to Bandai taking over the line, Cop-Tur transforms from robot to "GoBotic" helicopter.

The fourth toy from the original six figure wave, Copter Man was released by Bandai Australia during the second quarter of 1983. He remained identical to the original Gyro Robo toy, albeit packaged on a blue backing card.

A carded repackage of Gyro Robo featuring a new starfield-style background, Helicopter was released by Bandai Europe during the latter half of 1983. The figure was later re-released as part of the second wave on a blue backing card.