An Astrobeam malfunction sends Leader-1 and Scooter to a parallel universe of evil Guardians and heroic Renegades. 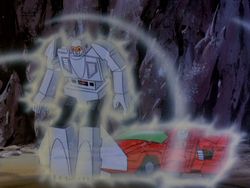 In front of an audience of international dignitaries, the Guardians demonstrate the ability of their new Proton Cultivator to make barren land fertile again. When the Renegades attack the demonstration, Turbo gets the dignitaries to safety while Leader-1 and Scooter ("backed up" by a Scooter-generated hologram of Turbo) counterattack. Unfortunately, the two are lured into a trap in a box canyon, where the villains have stashed an Astrobeam. Crasher zaps the Guardians with the beam, intending to teleport them into the Sun, and the villains abscond with the Proton Cultivator. While Turbo attempts to contact GoBotron, only to discover that an ion storm is disrupting transmission, Nick and A.J. follow the Renegades and watch as they convert the Proton Cultivator into a Proton Destructor, able to reduce metal to putty. 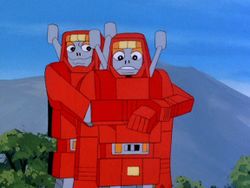 Leader-1 and Scooter, meanwhile, materialize not in the Sun, but in the middle of a forest, no worse for wear. The sound of battle nearby draws their attention, and when they investigate, the two Guardians are shocked to see themselves battling the Renegades! These mysterious doppelgangers drive the Renegades off, and when Leader-1 and Scooter approach them in search of answers, their evil-hearted doubles take them prisoner and throw them in a cell on their Command Center. Scooter easily hacks into the cell's systems and shuts off its energy bars, though their larger problem still remains: the Astrobeam, Leader-1 deduces, has sent himself and Scooter into an alternate universe where everything is reversed! Attempting to escape, the pair come across the evil Guardians working on a Proton Destructor of their own, converted from a Proton Cultivator stolen from the Renegades, which they plan to turn on the city of "Wen Kroy." When the villains turn the Destructor on them, Leader-1 is able to save Scooter with his forcefield, and manages to redirect the Destructor back toward their evil doubles with a few well-aimed blasts. This buys the pair time to escape, but their bodies have been severely damaged by the Destructor's beam and they realize they must seek help from this universe's heroic Renegades! 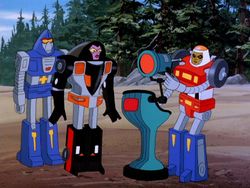 Back in the "regular" universe, Nick sneaks off to spy on the Renegades some more and learns that Leader-1 and Scooter were supposedly Astrobeamed into the Sun. He is spotted and caught by Cy-Kill, but saved moments later when Matt Hunter leads a squadron of fighter jets in an attack on the Renegades' bolthole. While Nick gets away, the jets are not so lucky; the Renegades have already built several copies of the Proton Destructor, and even though the clumsy Cop-Tur manages to destroy one while attempting to wield it, Crasher is able to use the weapon to bring down Matt's jet, forcing the others to retreat. Matt parachutes to safety and is met by Turbo, Nick, and A.J., whereupon Nick shares what he has learned. Turbo is hopeful that the ion storm interference may have disrupted the Astrobeam too, meaning that Leader-1 and Scooter will have escaped their fate... 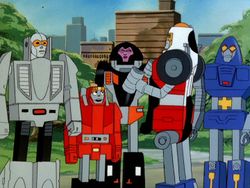 In the mirror universe, Scooter tracks Renegade transmissions to locate Thruster, but when he and Leader-1 attempt to peacefully approach, the Renegades assume that their enemies are attempting to trick them, and take Leader-1 and Scooter captive. The Renegades naturally disbelieve the Guardians' wild tale of parallel universes, until Scooter collapses as a result of his injuries, which Crasher recognizes as the work of the stolen Proton Cultivator. At Cy-Kill's suggestion, Leader-1 agrees to submit to the Brainstormer, which verifies the truth of his words. Convinced, the Renegades use another of their Cultivators to reverse the effects of the Destructor on the bodies of Leader-1 and Scooter.

Meanwhile, in the regular universe, the Renegades begin loading their duplicate Proton Destructors aboard Thruster. Unable to delay any further, Matt and Turbo launch an attack, with Matt sniping from a nearby hill while Turbo drives down into the thick of the action. Cop-Tur chops down trees to send Matt fleeing for cover, and Cy-Kill turns the Proton Destructor on Turbo. 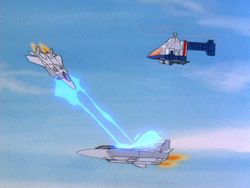 In the mirror universe, the Guardians and Renegades head for Wen Kroy to stop the evil Guardians from unleashing the Proton Destructor on it. In the ensuing battle, the presence of two Leader-1s only winds up confusing Cop-Tur and leads him to attack the one on his side, until the wicked laughter of the evil Leader-1 betrays his identity. Cop-Tur blasts the evil Guardian leader, and then he and the heroic Leader-1 destroy the Proton Destructor, sending the enemy Guardians packing. The Renegades thank Leader-1 and Scooter for their help, after which the Astrobeam finally reverses, teleporting Leader-1 and Scooter home.

Leader-1 and Scooter materialize in the middle of the Renegade camp as Turbo is being bathed in the Proton Destructor's ray. In the confusion that follows, the Renegades—now outnumbered by the Guardians and humans—are pushed back, allowing Nick to run up and take control of the Proton Destructor. The Renegades retreat lest they be caught in its beam, departing under cover of their stealth device. Scooter converts the Destructor back into a Cultivator and uses it to heal Turbo's injuries, as everyone marvels over his and Leader-1's incredible adventure.

"When we're done with that place, they'll call it the Baked Apple!"

—Turbo gives the Renegades a choice, and Crasher picks the hard way 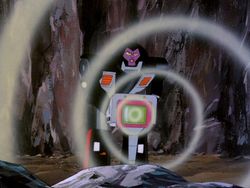 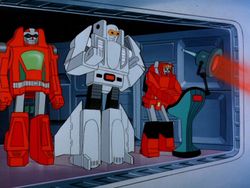 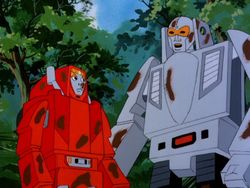 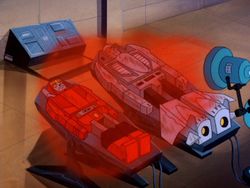 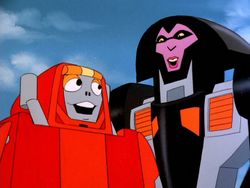