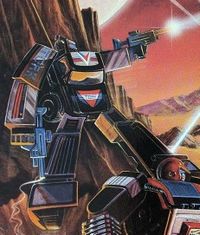 Tork is a Guardian, and one of the Secret Riders. Apart from when he's not either. When he's a Guardian he's blunt but tough and uncomplaining, happy to use his robust truck mode to lug gear around but enjoying the chance to have a good fight as well. When he's a Renegade he's a general-purpose anonymous thug.

The Renegades Tork and Blades used the Astro Beam to join Cy-Kill on Earth. He needed reinforcements to help him claim the power of the alien known as Alaric. Despite their firepower, however, Tork and Blades were virtually useless in the fight that followed, as Leader-1 used his forcefield to block their attempt to kill Alaric, Scooter and Nick - convincing the alien the Guardian leader was worthy of his gift. Alaric subsequently transported the Renegade force to Earth's Moon. The Gift

Tork's appearance as a Renegade vastly contradicts his later appearances as a fresh Guardian recruit. While it can be fanoned into making sense via a defection or similar, considering that he appears alongside an incorrectly-named Night Fright - suggests it was planned early in development that Tork would be a Renegade before plans were changed, or that Hanna-Barbera got him mixed up with Clutch.

Tork was one of the new recruits at the Guardian Academy, being assigned to the Blue Team along with Twister, Staks and Tri-Trak. While Tork generally performed well the constant impetuous behaviour of Tri-Trak kept damaging Blue Team's scores compared to those of Re-Volt, Chaos and Traitor on the Red Team. He voiced his displeasure after Tri-Trak had 'killed' everyone in a hostage rescue drill on the Thruster simulator, only to be told of the value of teamwork by Leader-1. As such, when the Red Team shot off ahead on flight circuit practise and Tri-Trak noticed suspicious activity on one of Saturn's moons before descending to investigate, Tork and the rest of the Blue Team followed. They were ambushed by Vamp, Scorp and Creepy; the latter grabbed Tork who needed rescuing by Tri-Trak, though he still found time to criticise his fellow cadet even as he was being carried to safety. Both were then webbed up again by Creepy but saved when the Renegades retreated and the Red Team returned. He was then unsympathetic when Tri-Trak's record score was undone by a possible target malfunction, and openly called his team-mate a loser when he was the sole cadet not to graduate; Tork himself had the fourth-highest total of the two groups. However, the Red Team were in fact the Renegade Dread Launchers, planning to capture Zeemon at the graduation ceremony. When Tri-Trak arrived to try and warn them the rest of Blue Team quickly realised he had been telling the truth all along, and helped chase after the Renegade spies, eventually saving Zeemon and capturing the Dread Launchers. The ceremony resumed, with the Blue Team honoured and put through final Modification. Tork and the others were so impressed with Tri-Trak's determination that they asked for the team to be kept together in service; Leader-1 agreed, giving them the codename Secret Riders. Guardian Academy 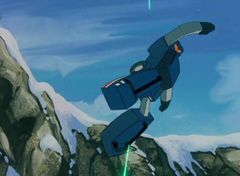 One of Tork's first active missions was to transport Matt Hunter, Doctor Janus and Lois Ransom to verify the scientist's discovery of Atlantis, along with Scooter. Tork carried most of the equipment in his vehicle mode, which was well-suited to the uneven terrain the group had to traverse. The expedition was ambushed by Cy-Kill and Crasher but Tork was able to bury the pair under rock and ice. Janus was actually working with the Renegades, and while Tork helped set up a base camp in Atlantis they attacked, knocking him out. Leader-1, Turbo, Nick and A.J. arrived with a Boomer to drive them off, and Tork was repaired. However Janus used the Amulet of Power to call forth the ancient Furies, who chased everyone bar Tork and Scooter into a cave and bury them. Working with Scooter, Tork then made a dummy attack on Janus, taking the Amulet. While Cy-Kill soon takes it Scooter is able to trick a dragon created by the Renegade into freeing their friends. Tork then drew off Crasher before capturing an apologetic Janus, and the Guardians eventually use the Amulet's creations against each other before driving the Renegades away. Terror in Atlantis Later, Tork was working with Van Guard and Turbo on the construction of a new section of GoBotron when the Rock Lords Solitaire and Nuggit first entered their airspace. GoBots: Battle of the Rock Lords

A rivalry began to develop between the Secret Riders and the up-and-coming Robo Rebels. Twister and Tork grumbled about the Rebels getting choice assignments, but Tri-Trak tried to remain level-headed and argued that all assignments were important. Unfortunately, the Riders were unable to stop the Renegades from stealing the Macrocosmic Continuum Distorter from the Scientific Moon of GoBotron and, to make matters worse, their call for aid brought none other than the Robo Rebels. Tempers flared between the two groups when the Rebels teased the Riders about their failure. Twister challenged Bent Wing to a race to track down the Renegades, and Tri-Trak was forced to go along to keep an eye on his peers. The two pursuing Command Centers were led into a trap by their Thruster targets, surrounded by nine Thrusters that disabled the ships and brought them aboard Roguestar. Despite their capture, the Secret Riders and Robo Rebels continued to squabble until Tri-Trak channeled Leader-1 and gave a speech about tolerance, or teamwork, or something. The united Guardians split into two mixed teams to disable the Distorter and repair one of the Command Centers using parts from both. They were successful and escaped Roguestar having learned a valuable lesson. Riders and Rebels Tork and the Secret Riders were present on Quartex when Boulder, the Guardians, and UNECOM began the tri-planet alliance in opposition to the evils of the universe. Unfortunately, Cy-Kill was also in attendance, and his three combiners Puzzler, Monsterous, and the new Nemesis secured his victory over the forces of good. Combiner Wars Part 1 Still, Matt Hunter managed to rally the Guardians and Rock Lords to press on against Cy-Kill. They used Cy-Kill's own arrogance to turn his allies against him, and the battle began anew. Tri-Trak and the Secret Riders were among the Guardian forces who helped vanquish Cy-Kill and Magmar, seemingly forever. Combiner Wars Part 2

As Sideways and Gong played with mixing universal streams, the Decepticons staged an all-out assault on Guardian City on Earth. Tork and the Secret Riders manned the parapets to fend off their attackers. When Leader-1 fought Megatron to a standstill, Tork and Tri-Trak arrived to help their leader take Megatron into custody. Unfortunately, when Tri-Trak saw Megatron reach for a weapon, he impulsively fired off his hand-blasters, and Megatron deflected the shots into Leader-1. With one more round of fire, both leaders fell to the ground. After the battle was over, the Secret Riders and Robo Rebels attended the bedside of Leader-1 as their commander passed away from his injuries. Tri-Trak blamed himself and stormed out of the recovery room. Tork went to follow, but Throttle cautioned him to leave their friend alone to deal with his grief privately. Echoes and Fragments 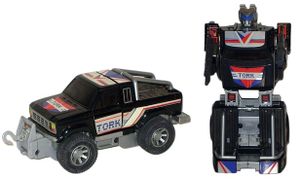 Tork was released by Tonka in the third series of GoBots, and converts from robot to Ford Ranger pick-up truck in 10 steps. The toy was a recolour of Ford Ranger from Zenmai Kahen Winch Robo with a new stylish black/silver colour scheme and an extensive new set of factory-applied stickers. The original version of the toy had previously been released under the Ford Ranger name as one of the Robo Machine Winchers. As one of the Secret Riders he features a friction motor and working winch in vehicle mode; the winch can still be accessed in robot mode on the figure's back, while the power base can be used to propel the robot forward. While much of the toy is plastic, Tork has big chunky rubber tyres. The legs are solid but Tork has some movement at the shoulder and elbow. The Winch Robo "Gerwalk Form" mode (basically the 4x4 with the arms left hanging out) was wisely not advertised on the GoBots release but naturally can still be attained if you really, really want to. Like all the Secret Riders, Tork is one of the rarer GoBots figures.