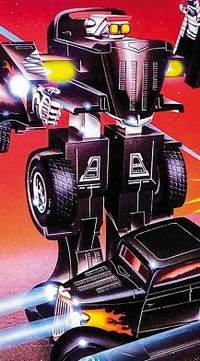 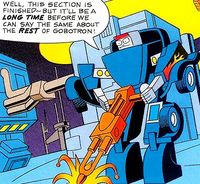 Super Couper was working on repairs of GoBotron with Throttle and Scooter when he was jumped by the Night Fright. He soon chased the Renegade off but was unaware of the real reason for the attack - a magnetic transmitter had been planted on the Guardian and was beaming Guardian plans back to Cy-Kill, Cop-Tur, Night Fright and Clutch onboard Thruster. The Guardians set off on an important mission but were ambushed by the Renegades, with Super Couper saving Leader-1 from one of Cy-Kill's energy blasts. Leader-1 then spotted the transmitter and used it to lead the Renegades into a trap, locking them onboard a freighter they then sent off to the Crab Nebula. A Spy Among Us 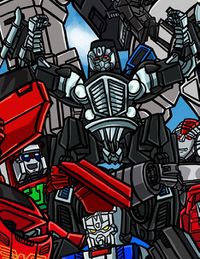 During the Diaspora, Super Couper was dispatched to Level 34 along with the Robo Rebels and evil Rock Lords. Cultural Appropriation

Super Couper was training to join the Guardians at the Guardian Academy, but his squad of "Robo Rebels" didn't appear to be Guardian material. Super Couper was easygoing and not seriously committed to his training, while his constant joking annoyed the others and upset the sensitive Tail Pipe. When the Renegades attacked during one training exercise, the Guardian Council confined the cadets to quarters until an inquiry determined if they were working with the Renegades themselves. Super Couper and the others sneaked out to find evidence to prove their innocence, but instead stumbled into an attempted murder scene. They were discovered standing over the body of High Councilor Zeemon, who had been shot in the council building. Rebels Without A Circuit

Super Couper and the others were locked up in the Gobotron Stockades for attempted murder. Major Mo visited them, and the Rebels confided in him their suspicions about Councilor Bladez. Mo agreed, but control of the Council had fallen to Bladez with Zeemon's incapacitation, and Bladez now planned to launch the Guardian fleet on a special mission. Bent Wing once again convinced the Rebels to break free and clear their names. They found Bladez's home, and were shocked to see him conspiring with the Master Renegade and Cy-Kill to send the fleet into a trap. The Rebels were discovered and fought with the Master Renegade's lackey, Creepy. They defeated him, but not in time to warn the Command Centers before they blasted off. Fugitives

Creepy found the Robo Rebels again, and their cadet-strength blasters were too weak to truly defeat him. Before the team fell before him, little Tail Pipe rushed in and grappled with the Monster GoBot, sacrificing himself so his teammates could escape. Super Couper and the Rebels found Major Mo, and learned the Guardian fleet had engaged the Renegades before the Master Renegade stepped in and overpowered BOTH sides after they were weakened. The Robo Rebels prepared a counter-strike as the last remaining free GoBots. Double Cross After Astro-Beaming to the Prison Moon of Gobotron, the Robo Rebels split up. Major Mo and Super Couper went for the central control unit for the Quick-Step automated guards while Bent Wing and Raizor fought their way directly into the stockades. When the Quick-Steps were disabled, the Rebels freed Leader-1 and Cy-Kill's forces. As the Robo Rebels reversed the Astro-Beam and returned to Gobotron, the Master Renegade attempted to stop the escape by turning the Gravity Collapsar Ray on the Prison Moon, imploding the moon entirely. Countdown to Annihilation

Fortunately, the Guardian and Renegade fleet had escaped the moon just in time. Bent Wing rallied the Robo Rebels to free Tail Pipe and disable the Collapsar Ray, giving the Command Centers and Thrusters better odds to retake the planet. At Bladez's mansion, they battled the Master Renegade and his Monster GoBots. Super Couper broke Tail Pipe free and he sabotaged the Ray, and soon the Renegades and Master Renegade's forces were in retreat. As the dust settled, Major Mo and the recovered Zeemon presided over the graduation ceremony of the Robo Rebels who were inducted as full members of the Guardians. Graduation Day

On their first visit to Earth, the Robo Rebels vacationed at the Los Jóvenes Dude Ranch with Matt Hunter, Nick Burns, and A.J. Foster. Super Couper went snooping, and was surprised to learn Los Jóvenes was run by Ponce de León and various historic figures from the Wild West, made immortal by the legendary Fountain of Youth. Unfortunately, Loco and Vain Train were eavesdropping on this revelation, and captured the waters of the fountain for themselves. Loco re-engineered the water into an anti-chroniton agglutination that froze his molecular structure in time, making him unalterable and therefore invulnerable. The cocky Renegade was lured away from his laboratory, though, and Tail Pipe was able to reverse the formula and disable Loco's invulnerability. Going Loco

Super Couper was part of a frontal assault against Cy-Kill's base on the dark side of Earth's moon. Although they were driven off, the Guardians were really a diversion for Scooter and Tail Pipe to sneak in and rescue Anya Turgenova. The Hawks of Space Part 2 The Robo Rebels stopped Stinger and Stallion from stealing a meteorite fragment from a museum on Earth. Unfortunately, the Renegades were successful at their second attempt, after learning the art of ninjitsu. Cy-Kill's Ninjas The Robo Rebels defended a convoy bringing more material to GoBotron for the planet's reconstruction. Space Pirates of the Helix Nebula

The ongoing success of the Robo Rebels as a unit sparked some jealous from the previous up-and-coming heroes, the Secret Riders. When the Renegades stole a Macrocosmic Continuum Distorter from the Scientific Moon of GoBotron on the Secret Riders' watch, Super Couper began joking about the Riders and their failure. One thing led to another, and the Secret Riders challenged the Robo Rebels to recover the Distorter before they did. The two squabbling squads were easily lured into a trap by the Renegades and taken aboard Roguestar. The Secret Riders' leader Tri-Trak finally managed to focus the two Guardian teams into working together. The united Guardians then managed to escape Roguestar and destroy the Continuum Distorter. Riders and Rebels

The Robo Rebels were present on Quartex during the ceremonies for the tri-planet alliance between the Rock Lords, UNECOM and the Guardians. Unfortunately, Cy-Kill and Magmar decided to interrupt the festivities. The combined power of Puzzler, Monsterous, and Nemesis overcame Courageous and Fossilsaurus, and the Renegades captured Leader-1, General Newcastle, and Boulder. Combiner Wars Part 1 Demoralized by Cy-Kill's combiner advantage and the loss of their leaders, the heroes almost gave up before Matt Hunter gave a speech rallying their spirits. They managed to turn Cy-Kill and Magmar against each other and rescue their friends, bringing a swift conclusion to the Combiner Wars. Combiner Wars Part 2

As Sideways and Gong played with mixing universal streams, the Decepticons staged an all-out assault on Guardian City on Earth. Bent Wing and Super Couper were sharing a bunker with their fallen comrades Sparky and Professor Von Joy. As Bent Wing urged her partner to focus on the battle and get a stationary Boomer into place for a counter-attack, Tail Pipe and Raizor arrived with Daniel Witwicky and the Robo Rebels were reunited. The Guardians turned their Boomer on the incoming Decepticons, but the Constructicons formed Devastator, who destroyed their Boomer with a single piece of thrown debris. The Robo Rebels scattered to avoid being destroyed themselves. Echoes and Fragments 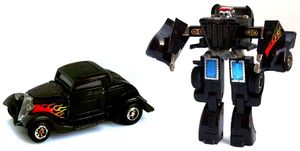 Super Couper was released by Tonka in the third series of GoBots, and converts from robot to Ford Deuce Coupe. The figure was designed by Bandai on behalf of Tonka. As such, the figure was never released in Japan. The car mode features rubber tyres. In robot mode Super Couper has articulation at the shoulders and knees, though the latter is of little use without the robot losing balance. The robot head is spring-loaded and as a result on some examples it can come up off-centre or even get stuck entirely. Like all of the third series Super GoBots he is among the rarer GoBots figures.

Super Couper was issued as part of the European range with no significant changes from the American release - aside from being a lot easier to find.