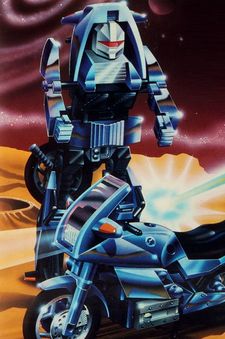 As a new Guardian, Throttle was assigned to work with the Secret Riders and was serving onboard the Command Center with Leader-1 when they received a distress call from the Earth freighter Pilgrim and set off to help. On arrival he headed out on the attack, shooting Crasher before the Renegades went into retreat. He then helped Leader-1 run a power cable to the Pilgrim before its' life support failed. After the Pilgrim was helped back to GoBotron the Guardians came up with a scheme to get the ship past the Renegades and to the colony of New Earth, with Leader-1 taking the colony freighter out as a decoy while Throttle, Tri-Trak and Twister escorted the humans and the Last Engineer on a Command Center. This section of the plan worked - though Throttle expressed frustration on not being selected to fight - but when they arrived on New Earth they were ambushed by the Master Renegade and his minions Vamp, Scorp and Creepy. The three Guardians were restrained under an energy net until Cy-Kill arrived, with a stray blast from the battle freeing them. Throttle then sprang into action, engaging Crasher once again, first in the air and then on the ground after she converted, causing her enough damage that she had to be carried off by Cy-Kill after the battle, and saving the colony.Quest for New Earth 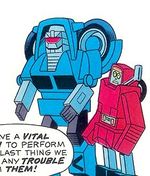 Throttle was ambling around on the surface of Gobotron while Super Couper carried out repairs and watched as Night Fright conducted a strange hit-and-run attack on his fellow Guardian. He was later part of the team selected by Leader-1 to recover a stranded freighter full of vital zintrinium. However their actions are known by Cy-Kill as Night Fright had actually bugged Super Couper and as they were loading the material onto the Command Center, Throttle spotted the arriving Thruster. The Guardians are soon pinned down before Leader-1 discovers the bug and tricks the Renegades into the empty freighter before firing it off into space. Throttle confirmed all the zintrinium was loaded and the Command Center headed back to Gobotron with everyone having a good chuckle about the Renegades' involuntary vacation in the Crab Nebulae.A Spy Among Us

When the giant Vamp attacked a human city Throttle arrived to stop him. Enlisting a nearby human as his rider he charged the Renegade in motorcycle mode, causing a distraction that allowed Spy-Eye to take Vamp out. Challenge of the GoBots - A Robo Machine Product

Throttle battled the Enemy Machine Men in an Australian city, taking time out to apologise to an army general for the destruction. The general replied better one city than all of them and that once the Friendly Machine Men followed the human population of the city in evacuating he would be deploying a nuclear bomb to end the fight.Challenge of the Machine Men

In Axiom Nexus, Cy-Kill recalled the Secret Riders' victory over the Dread Launchers at their graduation. He remembered the Guardian members Tri-Trak, Tork, and Twister, but couldn't recall the fourth member of the Secret Riders. Staks? Throttle? Renegade Rhetoric, 2015/10/17

Throttle was working on a new force field with Scooter, Turbo, Van Guard, Nick Burns, and A.J. Foster when Cy-Kill traveled back in time and kidnapped the young GoBeing Luther Unum into the future, before he could become Leader-1. The force field protected Throttle and his friends from the temporal inversion wave, and they found themselves on a Renegade-controlled Earth with an unfamiliar history. As one group worked to rescue Luther Unum, Throttle and the second group snagged Cop-Tur and tricked him into revealing the location of Saeculum Gamma, the planet housing the Time Portal Cy-Kill used for his victory. Renegade Victory Part 1

Throttle and Turbo escaped from the Zod that Cop-Tur summoned. Although Cy-Kill managed to destroy their Command Center on the way to Saeculum Gamma, their emergency lifepod still brought the group down to the surface. Despite a fierce skirmish, Luther Unum made it back through the Time Portal, restoring the timeline. Throttle destroyed the Time Portal as well, preventing the Renegades from using it again. Renegade Victory Part 2

Throttle and the Secret Riders joined forces with the RoGuns to attack the Renegades' base on Mars. The Renegades countered with their Martian allies led by Bars Barkas, who took the Riders prisoner. However, Throttle managed to befriend the chieftain's son, Losa, and together they turned the Martians against the Renegades. The RoGuns of Mars

As Sideways and Gong played with mixing universal streams, the Decepticons staged an all-out assault on Guardian City on Earth. Throttle and the Secret Riders manned the parapets to fend off their attackers.

After the battle was over, the Secret Riders and Robo Rebels attended the bedside of Leader-1 as their commander passed away from his injuries. Echoes and Fragments 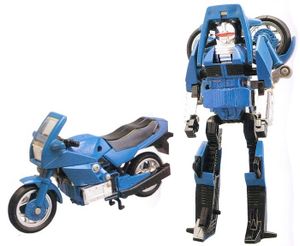 Throttle was released by Tonka in the third series of GoBots, and converts from robot to BMW K100RS in eight steps. The figure was designed by Bandai on behalf of Tonka for the Super GoBots range. As such, the figure was never released in Japan. Throttle is one of the most impressive figures in the range, with an inventive transformation, a rare use of ratchet joints in the line, good robot mode proportion and excellent vehicle mode detail, including a working kick-stand for display. While both wheels can be broken off the toy with excessive force, Throttle isn't particularly fragile - though the wrist joints can wear. The rear of the box contained a character biography. Sadly - like all the third series Super GoBots - Throttle is very rare. 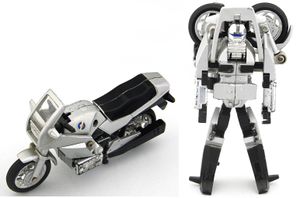 Throttle was also available in the European market in a silver paint scheme, closer to the toy's original concept art and thus animation model. The toy is otherwise identical to the North American release - apart from being made in much larger quantities and being much easier to find, while also looking sharper.

Throttle was also available in Australia, using the same colour scheme as the European release.

The silver version of figure was reissued by Bandai in Europe during 1993 as part of the De Luxe Robo Machines range of Robo Machines. For trademark reasons the toy was renamed simply DX Motor Bike. Sadly, like most of the Robo Machines figures, DX Motor Bike uses poor quality materials and suffers from mould degradation.