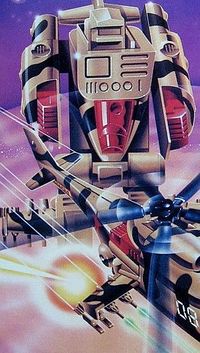 Night Fright is a Renegade. He has a ghoulish persona, taking great delight in frightening humans, especially in the dark.

He is sometimes known as Blades. 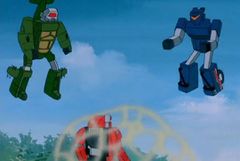 When the powerful alien Alaric arrived on Earth Cy-Kill was able to trick him into handing over his powerful staff. However the visitor soon fell into Guardian hands. Worried that he still had some power to impart, the Renegade leader arranged for Blades and Tork to travel to Earth via Astrobeam to bolster his forces, and attacked the Guardians and their friend. While Cy-Kill, Crasher and Cop-Tur battled with Leader-1 and Turbo, Blades and Tork were to destroy Alaric, who was with Scooter and Nick Burns. Seeing his friends in danger, Leader-1 projected his forcefield over the trio despite the danger it meant for himself, blocking the Renegades' fire. This finally convinced Alaric of the Guardian's nobility, and he used some of the last vestiges of his power to instantly transport Blades and the other Renegades to the Moon. The Gift 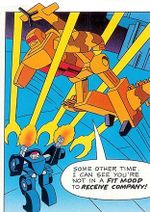 Night Fright made a seeming hit-and-run attack against Super Couper on GoBotron; the actual purpose of the raid was to plant a bug on the unsuspecting Guardian. This allowed Cy-Kill, Night Fright, Cop-Tur and Clutch to listen in on the Guardians' plans and the Renegades set off to attack them while they unloaded zintrinium from a stranded freighter. Initially the bug gave the Renegades the upper hand but once Leader-1 realised what was happening he was able to trick Cy-Kill into leading his troops into the vessel's empty hold and then fire them off towards the Crab Nebulae for an unwanted vacation. A Spy Among Us 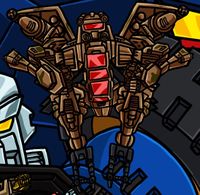 During the Diaspora, Blades was dispatched to Level 44 along with an assortment of Renegades and the RoGuns. Cultural Appropriation

Blades, Pincher, and Twin Spin launched an attack on UNECOM's Mercury facility, only to be driven off by Doctor Braxis and his new Destabilizer Cannons. Once Braxis Twice Shy Part 1 When Zero and the Master Renegade teamed up, Cy-Kill couldn't have anyone else ruling the world but him. He sent Blades and Psycho to confront them during a raid on UNECOM, but Turbo and the Guardians showed up, firing upon both groups of villains. Trash and Treachery Doctor Faraji, creator of the Dynamic Asymmetrical Wavelength Nullifier, was attending the SciFi Con when the Renegades attempted to capture him. Blades attended in cosplay like the others, dressed as Inuyasha. Darkest Before the Dawn Cy-Kill commented on his soldier Blades while broadcasting on Axiom Nexus. His gunship mode would be a perfect partner for Cy-Kill's new Renegade recruit, Warpath. Cy-Kill mused that when he one day drew the Monster GoBot Bladez to his side, one of the two might have to change their name... Renegade Rhetoric 2015/10/16

For their own amusement, Sideways and Gong played with reality so that elements of a Gargent stream blended in and out of a Primax stream. In this universe, Blades was a Renegade who attacked a Command Center on its way to Autobot City on Earth. Echoes and Fragments 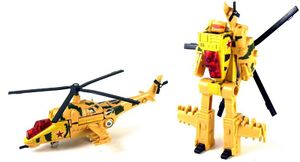 Night Fright was released by Tonka in the third series of GoBots, and converts from robot to Mil Mi-24 "Hind" attack helicopter in 13 steps. The figure was designed by Bandai on behalf of Tonka. As such, the figure was never released in Japan. Night Fright has articulation at the shoulders and hips. While neither the instructions nor the box art shows Night Fright's rotors being attached in robot mode a perfectly-sized socket is on the figure's back, where the folded rotors can hang perfectly. Like the rest of the third series Super GoBots Night Fright is among the rarest GoBots toys, with the removeable blades also being missing from some loose examples. The rear of the box also carried a character biography.

The European release had no changes from the North American figure, but is easier to find - though not by as much as some of the later Super GoBots are.