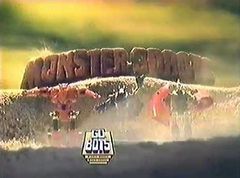 The Monster GoBots are a subteam of Renegade GoBots. Some were built as personal guards for the Master Renegade, some were built under the auspices of Cy-Kill and others have less clear origins. But all are... Monsters! 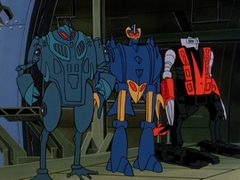 Bugsie, Klaws and Hornet were part of the first Renegade revolt under the command of Zero, clashing with Guardians led by Cy-Kill on Xeros."Et Tu, Cy-Kill"

Three Monster GoBots - Vamp, Scorp and Creepy - were built by the Master Renegade to guard him when he went into hiding on Antares III. When the Guardians arrived on the planet searching for the Last Engineer they were attacked by Vamp and Scorp. Believing the Master Renegade to be the Last Engineer, the Guardians and their human allies chased off the pair and took the sleeping GoBeing to GoBotron. Vamp and Scorp returned to guarding the Master Renegade's base on Antares III.Quest for the Creator When Cy-Kill's alliance with the Master Renegade became frayed he hatched a plan to win his rival's troops over. Along with Doctor Go he abducted a hapless GoBot and Modified him to become Pincher, who was then sent to Antares III.Flight to Earth The plan worked and while the Monster GoBots were defeated by CourageousReturn to GoBotron the trio were absorbed into the main Renegade force. 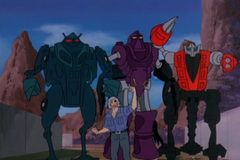 There they were used on numerous Renegade missions, sometimes working together. When a bold Guardian plan saw Roguestar itself boarded, Cop-Tur and the Monster GoBots were dispatched to deal with the invasion. Quest for Roguestar Jealous of the Guardians' Power Warrior Courageous, Cy-Kill decides to build Puzzler to counter it and dispatches the Monster GoBots to steal the materials needed. However Hilda Cocoa, wife of their ally Larry, gets hold of the remote for the prototype Puzzler, causing its' units to chase the Renegades around. This attracts the attention of the Guardians, who call up Courageous and destroy the Puzzler, forcing the Renegades into retreat.Auto Madic The Monster GoBots were later used as muscle during Cy-Kill's attempts to manipulate the Earth's tectonic plates. The trio struggled to match Turbo and the plan was foiled.Ring of Fire Later the trio were miniaturised and covertly placed inside the Command Center's computer systems, wreaking havoc. In response Professor Von Joy did the same to Leader-1, Turbo and Van Guard to combat them. Initially the Guardians had to fight carefully to avoid causing further damage before realising they could lead the Monster GoBots into the path of the system's automated cleaning drones, forcing the trio to escape from the computers and return to normal size, where they are tricked into fleeing back to Thruster by Scooter's quick thinking.Inside Job

However throughout all of this Vamp and Scorp had been secretly loyal to the Master Renegade, who was imprisoned on Roguestar. After biding their time they contacted Creepy - who had remained on station on Antares III, undetected. The trio then sprang their maker from his cell and followed him to the colony of New Earth, where he planned to defeat the Last Engineer and set up a new base. The Monster GoBots easily captured the Secret Riders. However when Cy-Kill arrived to have things out with the Master Renegade the Guardians got free and drove both groups off. Vamp and Scorp turned on the Master Renegade and returned to Cy-Kill on Roguestar while Creepy escape, still loyal to his creator. Quest for New Earth