Who can handle the gift of knowledge? 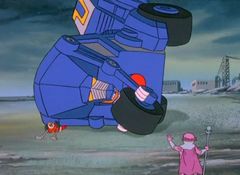 A new system of satellites will give the Guardians early warning of Renegade attacks but, as Nick notes, is causing adverse weather on Earth. Leader-1 is confident Scooter will be able to fix the problem; in the meantime the satellites pick up Thruster heading for Niagara Falls, where the receiving station for the system is based. The Command Center sets off in response, but Zod has already started destroyed the station with Cy-Kill, Crasher and Cop-Tur. Leader-1 arrives but is blasted by Cy-Kill and menaced by Zod. Turbo and A.J. go to save him but get intercepted by Crasher, Scooter and Nick are thrown to the ground when the Guardian drives over fallen power lines and a revived Leader-1 is surrounded by Cy-Kill and Cop-Tur. Just then a small alien wanders into the midst of the battle, introducing himself as Alaric and causing Scooter to faint. Alaric then teleports Nick out of Zod's path before easily repelling one of the beast's energy blasts before using his staff to levitate it into falling on Cy-Kill, giving Leader-1 the opening to take out Cop-Tur. However, the Renegade recovers swiftly and prepares to deal a killing blow while Crasher forces Turbo and A.J. off a bridge and over the falls. Nick begs Alaric to help and he freezes Cop-Tur and Turbo before saving the Guardians. The alien is scornful of the battle between GoBots and Cy-Kill seizes the opportunity to grab him, promising to explain the reasons behind the fight, and the Renegades escape. 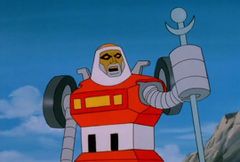 The Guardians fill Matt - back from a security detail at a UNECOM conference - in on events and debate what to do about Alaric. He has been imprisoned on Thruster but believes the Renegades are in need of his gift. A woman named Aura appears before him, telling him his time is short and he must join her before the Nexus of Epsilon. He tells her he must have time in order to bestow his gift correctly. As the Guardians search for Alaric as Cy-Kill puts the alien in the Brainstormer, hoping to find the secret of his powers, but he short-circuits the machine before they get anything solid. Nick meanwhile suggests they search for Alaric's energy signals instead of those of the Renegades, but Cy-Kill, Crasher and Cop-Tur have already changed tack and are claiming the Guardians are tyrants. Alaric offers them the use of his staff, and Cy-Kill soon goes to work practicing on some rocks and a tree. He's watched by Scooter and Nick, who followed Alaric's signals. The Guardian believes this is proof Alaric is evil, though Nick holds firm, believing the alien is the victim of Cy-Kill's trickery. The others soon arrive, with Leader-1 tasking Matt to help Scooter and Nick get Alaric to safety. Cop-Tur then baits the Guardian leader into the path of Cy-Kill, who hits him with a beam from the staff - though Leader-1 raises his forcefield just in time. Turbo meanwhile tricks Crasher into colliding with Thruster, with the ship's landing ramp falling on her, while Matt is able to snatch Alaric's staff from Cy-Kill before he does any damage; Scooter and Nick then get Alaric off the battlefield. However, Cy-Kill blasts Matt and retakes the staff; Leader-1 lets the Renegades return to Thruster, as the priority has to be to save the injured Matt. 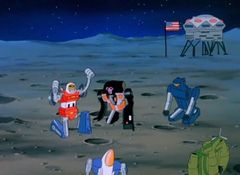 Matt is taken to hospital but there's little that can be done; his vital signs are failing and he is unconscious. Alaric notes the compassion of A.J. but is harried once again by a vision of Aura, who warns him his delaying is jeopardising his own lifeforce. He uses his powers to revive Matt, though the effort drains him. While he has the staff still, Cy-Kill is concerned that Alaric might have others to give the Guardians, realising they will likely talk the alien around, so calls up Blades and Tork as reinforcements. Alaric meanwhile explains to the Guardians and their friends that he is an ancient warrior who no longer fights with weapons but with knowledge, and must pass on his wisdom before he moves on to the next realm. The Renegades then attack; Scooter and Nick get Alaric to safety while Turbo draws Crasher and Cop-Tur outside and Leader-1 knocks Cy-Kill through the wall of the Command Center. Alaric tries to request his staff back but Blades and Tork swoop in; Leader-1 then moves his forcefield from protecting himself to protecting his friends. Impressed, Alaric recalls the staff, using its powers to beam the Renegades away to the Moon. This drains almost all his remaining lifeforce; he tells Leader-1 the Guardian's courage makes him the ideal recipient of his gift. Leader-1 demurs, believing the gift should be shared with everyone - which Alaric tells him means he passes the last test of worthiness. The alien then teleports them to GoBotron's Computer Moon, transferring his knowledge to the systems there before joining Aura on the next plane of existence, telling them to strive only for peace as he vanishes. 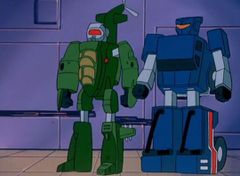 All this chaos for about 30 seconds of screen-time each... 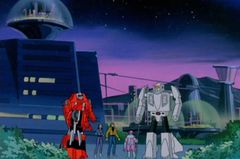