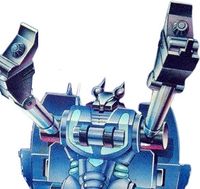 Bladez is a Monster GoBot created by the Master Renegade.

When a Cataclysm threatened their home reality, most of the Monster GoBots fled Level 1 as part of the great GoBot Diaspora. They wound up on the dystopian Cybertron of Primax 215.19 Epsilon: a world where the Great War between the Autobots and Decepticons had evolved into a series of ritualized Games fought between their successors, the Maximals and Predacons. The GoBots adopted new Predacon bodies, and gained infamy as a street gang known as the "Antares Eight". Ask Vector Prime, 2015/05/14

As they settled in, the Renegades built up a secret base called the Erebos equipped with a Modifier and databanks charting the activities of other GoBots in the multiverse. At some point, they welcomed in a second group of Gobotic refugees: the Monsterous combiner team, and their handler Odd Ball. Unhappy with the stagnant Cybertronian social order, the Renegades began their own plan to overthrow the dominant "Builders" and rule in their place. Cultural Appropriation

A few months into the Grand Uprising, Bladez and Pincher traded the G-Virus to Grimlock in exchange for everything the Resistance knew about the Human Confederacy. Micro-Aggressions

Bladez and the Antares Eight learned of an ancient Terran artifact the Rosetta Stone (renamed "The Stone of Sky Warp") held in the Museum of Decepticon Heritage. They arranged to appropriate the stone, and use it to lure the Terrans to Cybertron. Faking as if they were a Resistance team, the Antares Eight seized control of a trans-hyperwave caster in Proximax. Holding the Builder in charge hostage, they beamed demands for all Builders to leave Proximax in the name of the Resistance. In fact, the transmission was a trap to entice the humans, who monitored all Cybertronian transmissions, with a clear view of the Rosetta Stone in the background. The GoBots intended to use quantumite (a Gargent Cluster substance unknown to the Transformers) to weaponize the caster, snare the unsuspecting humans when they arrived, and take their greater technology.

Bladez and the Monster Gobots faced unexpected resistance, however, from a cross-factional group called the Ex-Bots. They interfered with the seizing of the tower, and were only stopped when Creepy got the drop on one of their members, Stiletto. In a second assault by the Cybertronians, Bladez fought on top of the tower against Snapper. He severed the Predacon's arm and restrained him while Oddball arrived and added Monsterous to their assault. Bladez was mesmerized by the fight between Monsterous and the Builder combiner Devastator, so he didn't notice Snapper wirelessly reactivate his severed arm until it grabbed a gun and launched two explosive shells into his chest. The surprised Bladez was blown to pieces by the attack. Cultural Appropriation

Bladez was the Master Renegade's final creation, apparently constructed after the Master Renegade was reawakened in the modern era. He and Creepy served as bodyguards and agents provocateur for their creator. Renegade Rhetoric (1), 2015/10/15 Bladez first emerged as a member of the Guardian Council on Gobotron, working closely with Zeemon and Major Mo while overseeing the training of new recruits at the Guardian Academy. Unfortunately, the latest band of cadets were so disruptive and contentious, they earned the nickname the "Robo Rebels". When the Renegades attacked the Robo Rebels' training exercise, Bladez raised serious questions on the Council about the Rebels. The previous Academy class's Dread Launchers were Renegade double agents, so it was possible the Rebels were leaking information, too. At Bladez's insistence, the Rebels were confined to quarters until a full investigation was conducted. The Robo Rebels broke confinement and visited the Council chambers. They learned only Bladez and Major Mo knew the location of the training exercise in advance, but were also implicated in the shooting of High Councilor Zeemon, who was found in the chambers near-death from blaster-fire, with the Rebels standing over him. Rebels Without A Circuit

Meanwhile, Bladez was established as head of the Guardian Council in Zeemon's absence, and prepared the fleet for a major offensive against the Renegades. In secret, Bladez and the Master Renegade contacted Cy-Kill for an alliance. Bladez announced he planned to send half the Guardian fleet of Command Centers to Alpha Centauri, where Cy-Kill and the Renegades could be waiting to eliminate them. Suspicious but eager for the victory, Cy-Kill accepted their terms. Bladez and the Master Renegade caught the Robo Rebels spying on them (having escaped custody to investigate Bladez further), but turned Creepy loose on the Guardian cadets before they could warn the fleet. Fugitives In fact, Bladez had dispatched the ENTIRE Guardian fleet to Alpha Centauri, surprising Cy-Kill with twice the numbers he was expecting. The battle was long and arduous, with 90% of the combatants disabled by the end. The Guardians squeaked by with a narrow victory, but Bladez had installed a special circuit in the Command Center fleet before they launched. The Master Renegade took remote control of the vessels and blasted the remaining Guardians into submission. Double Cross Bladez and the Master Renegade seized control of Gobotron in the absence of its protectors, recruiting the Monster GoBots to their side in lieu of Cy-Kill. The remaining Renegades and Guardians were housed on the Prison Moon of Gobotron. Only the Robo Rebels remained free and outside the Master Renegade's control. Countdown to Annihilation

But the Robo Rebels were enough. Using the Astro-Beam, they traveled to the Prison Moon and freed Leader-1 and Cy-Kill, allowing them to reclaim their fleets and advance on the Master Renegade. The Rebels then infiltrated Bladez's mecha-mansion, where he and Creepy guarded the Master himself. Bent Wing and Raizor drew the Monster GoBots away, allowing Tail Pipe and Super Couper to disable the Master Renegade's doomsday weapon. Bladez and Creepy escaped, taking the Master Renegade with them. Graduation Day Months later, Creepy and Bladez accompanied the Master Renegade to Rogue Star as he convinced four of Cy-Kill's Renegades to turn on their leader in exchange for Power Suit technology. The Monster GoBots were left behind to guard Cy-Kill and Cop-Tur, only to be defeated when Fitor, Crasher, and Chaos returned. Bladez and Creepy escaped with their master. Coup de Grunge During the incident on New Earth which resulted in the Master Renegade's arrest, Bladez and Creepy were not present. Cy-Kill presumed them to be off on some other mission for their master. Human Resources Cy-Kill had every intention of recruiting Bladez into the Renegades proper, a task perhaps made easy now that the Master Renegade was imprisoned. He was concerned that should he do so, however, there might be confusion with his trooper Blades. Renegade Rhetoric (1), 2015/10/16

When a Primax and a Gargent universe were tuned together, Bladez was one of several Monster GoBots in the service of the Master Renegade on Antares III. He helped capture Kup and Hot Rod, bringing them back to the Master Renegade's fortress to execute them following a fake trial. When the two Autobots escaped death and caused the Dactyls to spill out of their pit, the Monster GoBots fled for their own safety. Echoes and Fragments 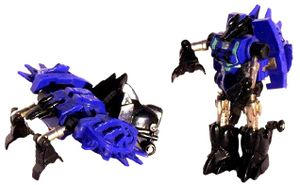 A redeco of the Machine Robo Baludas toy, Bladez transforms from a monstrous robot to a monstrous flying crab-thing. The figure was released in the third series of GoBots. While Bladez has a simple transformation even by the range's standards he makes up for it to some degree with excellent articulation - with rotating ball-jointed shoulders, ball-jointed hips, moving neck and knees; even his wings are mounted on ball joints. Bladez is generally sturdy, though too much force can snap the wings off their mountings.

The European release of Bladez featured no changes from the American version.