From GoBots Wiki
(Redirected from Baludas)
Jump to navigationJump to search 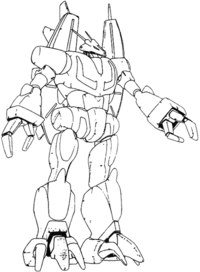 Baldas (バルダス) is a type of Devil Invader from the Casmozone and later a Gyandlar soldier.

A specialist in mountain combat, Baldas is armed with a Bald Sledder and a Bald Iron.

Media featured multiple versions of Baldas; for the sake of convenience all are listed here

The transdimensional villains from the Casmozone controlled huge armies of Baldas, Casmodon, Zarios, Falgos and Gildis minions. They were opposed by the Machine Robo, shape-shifting robots from Romulos. After a long struggle they destroyed Romulos and set their sights on Earth. However they were opposed once again by the Machine Robo, who hid among Earth's vehicles to oppose them. Machine Puzzler

Massed numbers of Baldas were one of the five types of Gyandlar Devils used by the Gyandlar. Seemingly entirely robotic, these were routinely destroyed and later rebuilt on the Gyandlar mother-ship. Along with Casmodon and Zarios, Baldas roughed up the Battle Rock Bally near Korora until Rom Stol intervened. The Man from Gyandlar In Cleo City, he captured Sara and handed her over to Diondra. The Heart of a Protecting Angel Along with Casmodon, Zarios and Gildis he attacked the convoy taking refugees to Emerald City and later the city itself. Gather All Machine Robo Baldas piloted one of Garudi's Spider Machines in another attack on Emerald City, but they were driven back by Land Commander 5. Attack, Land Commander 5! He was then part of Garudi's team that tried to prevent Rom from getting vital Metal Laster back to the city with an ambush at Devil's Mountain, but they were ultimately driven off by Mask Rock and Magna Rock. Knight of the Devil's Mountain, Mask Rock Baldas was one of the Gyandlar troops who sneaked inside Emerald City in the back of Tough Trailer, causing widespread chaos 10 Seconds Before the Explosion! Run, Tough Trailer! and in a ground assault after Gadess had personally devastated the city. Escape from the Underground - Pro Truck Racer Appears! He continued to be a regular in the Gyandlar forces until they were finally defeated. The Final Battle of Cronos 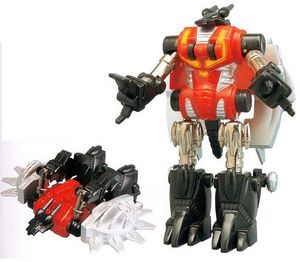 Baldas was the 5th figure in Bandai's Devil Invader Series and transforms from robot to monster in 6 steps. While Baldas has a simple transformation even by the range's standards he makes up for it to some degree with excellent articulation - with rotating ball-jointed shoulders, ball-jointed hips, moving neck and knees... even his wings are mounted on ball joints.

Baldas was reissued for the Machine Robo: Revenge of Cronos toyline in updated packaging. The figure was assigned to the Gyandlar Devils, and featured no changes from the original Japanese release.