The original progenitor of the Renegades, the diabolical Master Renegade is an endlessly-scheming madman bent on ruling GoBotron as he aimed to do in his heyday. Even though the majority of Renegades, including Cy-Kill, dismiss him as an ancient relic from a bygone era, his fiery rhetoric and army of loyal Monster GoBots is enough to win over some of Cy-Kill's own followers whenever the two leaders butt heads. His boundless ambition has not been tempered by the thousands of years that have passed since his heyday, and if anything his plans have only grown more complex and dastardly since his return. 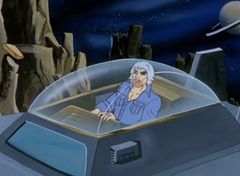 The Master Renegade was the founder of the Renegade movement, which aimed to overthrow the dominant Guardian peacekeeping forces on the then-organic world of GoBotron. To win the increasingly destructive conflict, the Master Renegade and his forces hijacked GoBotron’s asteroid-harvesting fleet and sent a massive meteor into GoBotron, ravaging the planet. Cy-Kill's Escape With his world’s biosphere ruined and the Renegades in shambles, he stole the Last Engineer’s spaceship and fled to his rival’s research base on Antares III. There, he designed the Monster GoBots Vamp and Scorp to guard his hidden base while he entered suspended animation. Quest for the Creator 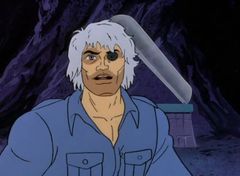 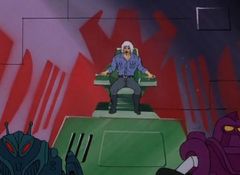 The Master Renegade stayed imprisoned until the Monster GoBots managed to free their creator. Together, they headed to the recently settled New Earth, intent on conquering this pristine world for themselves. Although they attempted to enslave the recently arrived colonists, capture the Guardians, and even knock out the Last Engineer Cy-Kill arrived. The Master Renegade managed to escape in the power struggle, but was pursued by the Last Engineer. The Guardian-allied GoBeing managed to gain the upper hand in the fight, but Creepy beamed his master away before the Last Engineer could finish the job. Quest for New Earth

These stories take place in a spin-off universe that follows the events of the original cartoon.

Bladez swore by the Master Renegade while negotiating with Grimlock. Micro-Aggressions

Thousands of years ago, the Master Renegade began work on a Gravity Collapsar Ray during the original war for Gobotron. Countdown to Annihilation Cy-Kill originally saw him as a noble figure who dared to rebel against the tyranny that the Guardians imposed. After repeated encounters with the man in the present day, Cy-Kill opined that he was no more than a senile shadow of the great hero he had once been. Renegade Rhetoric The Master Renegade remained at large following his escapades on New Earth and eventually set up a new base in Bladez’s mecha-mansion on Gobotron. He set up a new plan to try and force Cy-Kill’s Renegades and the Guardians into a battle of mutual annihilation. When the Robo-Rebels infiltrated their new command center, he sent Creepy after them and took Tail Pipe prisoner. Fugitives With both Cy-Kill and Leader-1 unaware that they were stumbling into his trap, he had Bladez activate controls on the remaining Command Centers, which blasted the combatants into unconsciousness. Double Cross

After locking up both sides on Gobotron’s Prison Moon, the Master Renegade and his lackeys broadcast their terms of surrender to the entire planet, and forced them to completing his old superweapon buried at the core of Gobotron. The only thing that stood between him and his plan of conquering the universe were the Robo-Rebels, and the Master Renegade mustered every force under his command in order to try and track them down, and the last freed Guardians managed to successfully spring the imprisoned Guardians and Renegades. The Master Renegade opted to test out his completed weapon on the Prison Moon itself, unaware that the GoBots had already Astro-Beamed away. Countdown to Annihilation The Robo-Rebels managed to break into the Master Renegade’s base, evading his various Monster GoBots, and attempted to bring him to justice. When Cy-Kill and Leader-1 began a renewed power struggle over the fate of the Gravity Collapsar Ray, the Master Renegade and his forces took the opportunity to flee. Graduation Day

The Master Renegade later resurfaced with an offer of an alliance between himself and Cy-Kill: in exchange for naming him the leader of the Renegades, he would provide the Renegades with plans for an exact duplicate of the Guardian’s Courageous combiner. Cy-Kill refused, only to have his own troops turn on him. Once aboard the Roguestar, the Master Reneagde and his Monster GoBots built their combiner; piloted by the turncoats who had betrayed Cy-Kill, they launched an attack on Gobotolis. Thanks in part to the sloppy construction of the suits and the Master Renegade’s own ego, they were unable to control the combination and were bested by Courageous. The Master Renegade and his troops chose to retreat rather than deal with a recently-freed and very irate Cy-Kill. Coup de Grunge On Beta Leonis, the Master Renegade struck up an alliance with Zero, and after travelling to Earth he developed a special algae capable of immobilizing any GoBot it touched. Once Gobotron was theirs, Zero betrayed him and the Master Renegade struck up a brief alliance with Leader-1 to free themselves from captivity before escaping. Trash and Treachery

In a hybrid universe created by Sideways and Gong, the Master Renegade and his Monster GoBots filled the same role as the Quintessons, carrying out deluded sham trials on Antares III. Though he tried to sentence Kup and Hot Rod to death, they were rescued by the Dinobots and RoGuns, who persuaded the Master Renegade’s servants to turn on him. Echoes and Fragments