Gong is a mysterious, imp-ish figure with power over time and space. Although nominally a Renegade, no one knows where he truly comes from. Gong seems to prefer mischief over malice, but his abilities mean that even some light mischief can have universe-warping consequences. Gong apparently serves Cy-Kill out of a sense of fun, but his loyalty to the Renegade overlord and their cause has never been truly tested. 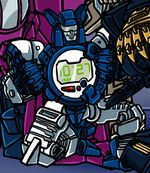 When Cy-Kill seemingly vanished out of existence after being shot with the Anti-Phasic Displacer Blaster, Fitor spared no expense searching the galaxy for signs of his survival. Months passed, but Pincher eventually returned to Rogue Star with a curious new Renegade called Gong. Fitor convinced Gong to locate Cy-Kill, and the trickster departed Level 1 to seek Cy-Kill elsewhere in the multiverse. Opportunity Knocks Part 1

Cy-Kill hinted at a Renegade ally on Axiom Nexus who clued him in to the connection between Vector Prime and the Guardian Vec-Tor. One would presume this was Gong, who successfully located Cy-Kill. Renegade Rhetoric 2015/10/15

Once the Transcendent Technomorphs finally identified him as a divisive faction leader, they stormed Cy-Kill's location during a broadcast of Renegade Rhetoric. He summoned Gong to appear at his location, and the temporal imp opened a portal back to the Gargent Cluster. Cy-Kill and the various Cybertronian he had recruited as new Renegades passed through Gong's portal to return to Level 1. Renegade Rhetoric 2015/10/21

Gong's portal opened up at Roguestar just as Courageous and the Guardians were boarding the Renegade flagship. The sudden arrival of Cy-Kill and his forces upset the flow of battle and forced both sides to retreat and reorganize. Gong, however, vanished during the melee. Opportunity Knocks Part 2

Gong was hanging out at Maccadam's Old Oil House on a version of Cybertron when he ran into a seemingly-similar mischief-maker named Sideways. The two invaders from foreign dimensions shared a drink, and Gong began bragging that his Guardians and Renegades would fare well against the upcoming attack of Unicron. Sideways got him to put it to a wager, and together they planned to manipulate the Omega Locks across two dimensions to blend this reality with one containing Gong's GoBot contemporaries.

Gong reached Cybertron's Omega Lock and began tweaking one-dimensional strings and the vibrational frequencies they used to define that universe. Under his influence, the Renegades of GoBotron replaced the Decepticons in the events leading up to the attack on Autobot City. Meanwhile, Sideways found his own Omega Lock terminal at the core of Old GoBotron in the second reality. His manipulations inverted the factions at play, restoring the Decepticons but now showing the Guardians of Guardian City defending against the invasion from their enemies. Sideways began to play again, mixing Autobots and Guardians, Decepticons and Renegades, before being pursued by Vec-Tor.

Sideways was captured by Vec-Tor and the Guardians, leaving Gong without a playmate to match wits with. He grew bored at the Omega Lock until Sideways escaped and called to alert Gong that Vec-Tor was coming for him. They laid a trap for Vec-Tor, getting him magnetized to Gong while Sideways was free to strike at the elderly Guardian. Somewhat fortunately, Unicron began his attack on Cybertron at that moment, causing cyber-quakes which freed Vec-Tor to swing Gong into a conduit, shocking him unconscious.

Vec-Tor and Sideways battled over the controls of the Omega Lock, while Vec-Tor tried to discern Sideways' true motives. Gong awakened in time to hear Sideways call the Renegade trickster an idiot, and his plan all along was to cause the destruction of the universe at Unicron's hands. Sideways was injured by Vec-Tor and forced to flee, leaving the Guardian to fix the dimensional strings just in time. As he tended to his wounds, Sideways was approached by a vengeful Gong, looking to pay him back for the earlier insult... Echoes and Fragments

The Monster GoBots' database of Diaspora refugees had the note "FROM THE FILES HACKED FROM GONG AND TIC TOC." Cultural Appropriation

Created by Impulse, Gong converts from robot to a working wristwatch. He advertises a unique magnetic back! The figure was available in two colour schemes - blue with white limbs or black with red limbs. The robot mode has surprisingly good articulation, with movement at the shoulders and elbows. And the middle of the thigh, though that one's in the wrong direction.
The same mould was used simultaneously to produce Tic Toc.