The Power Warrior Courageous is fast, powerful, and available at your local toy stores! 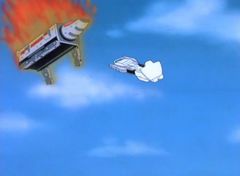 Leader-1 puts the first Power Suit through its' paces as Small Foot, Matt, A.J., Nick and the Last Engineer watch. The suit gives the Guardian leader greatly increased speed. Just then Turbo's Command Center arrives in flames and with two of the legs jammed. Scooter puts out a distress call; Leader-1 uses the new suit's powers to manually put the legs into position, enabling the battered ship to land. Crasher realises the suit poses a major threat to Cy-Kill's invasion plans. The Last Engineer shows off three more suits to the Guardians and the impressed General Newcastle - one with enhanced firepower that Turbo takes a shine to, one packed with high-tech scanners that Small Foot dons and another with telekinetic circuits, which appeals to Scooter. Small Foot immediately overhears Fitor and Crasher. The four Guardians set off in the Power Suits and chase after them. Leader-1 chases after Fitor before punching him out of the sky and while Turbo engages Crasher, blowing her into a crater. Nearby, Small Foot detects a forcefield and sets off to investigate with Scooter in tow - they find the cloaked Thruster, guarded by Destroyer. He is about to shoot them when Scooter uses his suit to create an avalanche, knocking the Renegade out. 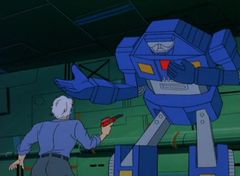 Onboard Roguestar, Cy-Kill is hailed by Pincher, who arrives with the trianium crystals for the updated transgressor along with Vamp and Scorp, who have opted to join the main Renegade force. The Master Renegade is put to work but is growing angry with Cy-Kill's dominance. Back on Earth, UNECOM use the Brainstormer on the captured Renegades, learning of the planned invasion. Leader-1 opts to undertake a pre-emptive strike on Roguestar in the repaired Command Centre, taking advantage of the Renegade ship turning off its' stealth field. The Command Center is detected by the Renegades, so Cy-Kill sends Cop-Tur and Tank to man Thrusters and intercept. However the Master Renegade pulls his transgressor gun, shooting Cy-Kill and getting the others to follow him under threat of being blasted. He takes over the defence, ordering the Thrusters to be launched. However, the Guardians have taken the stealth device from Crasher's ship and evade the interceptors, which the Master Renegade unwisely sends to GoBotron, believing that to be the Guardians' target. Instead Leader-1, Turbo, Small Foot and Scooter head towards Roguestar in their Power Suits. The Monster GoBots attack them in their ship and the Guardians are unable to lose them despite a journey inside an asteroid. 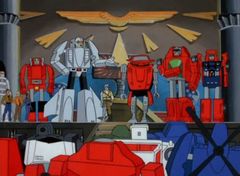 A stray hit on the Command Center sends Sparky crashing into the stealth device, making the ship visible to the Renegades. Onboard Roguestar Cy-Kill recovers and blasts the Master Renegade, who Cop-Tur takes to a cell. He begins taking control of the battle, recalling the Thrusters and firing on the Command Center and the Power Suits. However the Last Engineer responds to an SOS sent by A.J. in the redesigned Courageous. He shoots down the Monsters' ship, which crashes into Roguestar. However, the Thrusters then return - but the Last Engineer reveals the full range of the system and Courageous combines with the Power Suits to form a mighty Power Warrior. The huge robot carves up the Renegade fleet so Cy-Kill orders Screw Head to engage its' stealth device and escape. Later on a liberated GoBotron Zeemon hails the Guardians and the Last Engineer, who plan to work together to finally defeat Cy-Kill once and for all.

"One size fits all!"

—The Last Engineer lies outrageously on behalf of Tonka; good luck getting Scooter's toy inside P1... 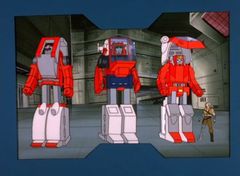 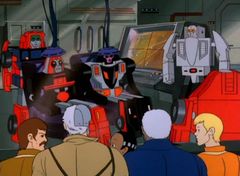 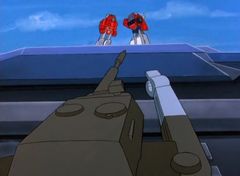 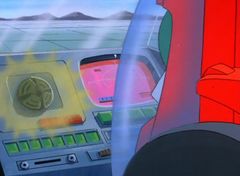 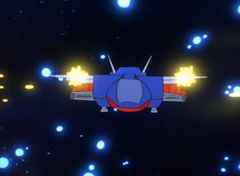