Screw Head is a member of Cy-Kill's evil Renegades. He often finds himself in the role of a science or sensor officer onboard Roguestar or a Thruster, or being used to drill under things. His head can also spin really fast, and he's big in Japan.

Screw Head was stationed on the Renegade Fortress when it came under attack from the Guardians, but he and Crain Brain were scattered by the Renegades' own secret weapon Zod before it was sent to Earth, Target Earth though he later continued the defence. Earthbound

After the Renegades succeeded in conquering GoBotron, Screw Head was assigned to Roguestar, patching Crasher's report about the escape of Leader-1 and the Last Engineer through to Cy-Kill. He later at least had the wherewithal to notice that the Command Center the Renegades had been using as an ad-hoc floating prison was heading in the wrong direction and sent Thrusters to investigate, though Turbo was able to pilot the ship into hyperspeed and escape. Flight to Earth He was forced to carry out the Master Renegade's orders when he seized control of Roguestar at a crucial juncture, making it clear he was unimpressed with the change of management. When Cy-Kill recovered and returned to command Roguestar was ordered in stealth mode, ceding GoBotron to the Guardians once again.Return to GoBotron 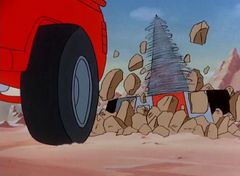 Along with Scorp, Screw Head was assigned to mine Varium ore on an unnamed planet in the Vega system, overseeing the Renegades' slaves in gathering the ore, which was then converted into fuel for Roguestar. The Guardians set out to investigate, but the spy Snoop was able to get a warning to the mining operation before they arrived. A trap was set, with Screw Head taking out Small Foot after tunnelling under the Guardian. However, with help from Scooter the humans Matt Hunter, A.J. Foster and Nick Burns fermented a rebellion among the miners, who rose up against the Renegades, crushing Screw Head under a huge boulder. The Guardians subsequently sabotaged the planet, which was destroyed - though Screw Head, Cy-Kill, Scorp and the exposed Snoop were able to escape on Thruster moments before.Cy-Kill's Cataclysmic Trap After Doctor Mobius told Cy-Kill he needed the ore Plutocite for his Inverta-ray, Screw Head was called up to Pluto by Astrobeam to help mine the material. When the Guardians arrived to stop them he helped in the subsequent scuffle, only for Cy-Kill to ultimately call a retreat when Crasher was injured and Mobius' son Danny intervened in the Renegades' plans. Genius and Son He was later assigned to a new Renegade base on Earth which was subsequently discovered by Turbo. Along with Crasher and Tank, Screw Head chased the Guardian, eventually tricking him into an explosive trap. However, the crippled Turbo was nevertheless able to slip away, losing his pursuers before finally going into shut down in the town of Barstow. Speed Is of the Essence 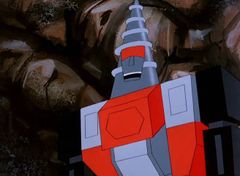 Under Crasher's command Screw Head and Tank were part of a team that undertook a successful raid on Lunar Enterprises' Mine #6 on the surface of the Moon, injuring Path Finder when she tried to intervene. However the Guardian was able to report a gravitational anomaly caused by the cloaked Roguestar, allowing the Guardians to trace the massive ship. However, their attempt to destroy the vessel was ultimately unsuccessful, and Screw Head joined the other Renegades in having a hearty chuckle at the mayhem they could cause before the Guardians discovered their mission had been a failure.The Quest for Roguestar When disgraced human scientist Robert Frost tried to hold the world to ransom by using his Climatizer to throw Earth's weather into chaos Cy-Kill decided he wanted it for himself. When they arrived Cop-Tur was swiftly electrocuted by an ionised force-field set up around the device; Frost taunted the Renegades, only for Screw Head to convert and tunnel under the barrier, capturing the Climatizer. The Guardians attempted to intervene but Cy-Kill used the machine to freeze Leader-1 and Turbo, leaving only Dive-Dive and Scooter free to stop them. When the Guardian submariner approached them he and Cop-Tur were sent to intercept him, though Screw Head especially was derogatory of the veteran's recent combat experience. However, Dive-Dive shot down Cop-Tur and was able to disable the Climatizer, with the machine instead freezing Cy-Kill inside a huge block of ice. As the Renegades retreated he helped carry his frozen leader to Thruster. Cold Spell 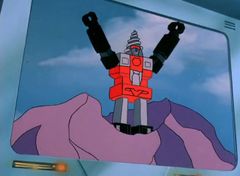 With Cy-Kill becoming frustrated by many defeats at the hands of the Guardians' Power Suits he hatched a plan to steal them. AAs part of Cy-Kill's strategy the Renegades were sent on various distraction raids, with Screw Head tasked with attacking UNECOM's tracking station in Hawaii in order to draw Leader-1 and Turbo away from the Command Center - a task he greatly enjoyed. Scooter Enhanced Along with Tank, Screw Head was one of the Renegades taken by Fitor to search for Cy-Kill's missing Thruster. On their search they ran into a Guardian Command Center commanded by Hans-Cuff, which was also looking for missing comrades. After a brief stand-off both ships worked out they had the same purpose, soon finding that their respective commanders were escaping from Kolob. Gameworld He was later recruited to help build a staging ground for a Renegade base at Boulder City, and participated in Cy-Kill's plans to use the would-be defector Steamer as a tool to capture the Guardians. However, the Renegades were again defeated, with Nick Burns using a digger to personally deal with Screw Head. Steamer's Defection He was later assigned to a secret base on Earth along with Tank, Geeper-Creeper and BuggyMan. They were discovered by the Guardians and attacked but all escaped thanks to the Renegades' new personal stealth devices. He was one of the Renegades kept cloaked in Vienna at bogus peace talks, though he was revealed by Scooter's new decoder, with Cy-Kill subsequently ordering a withdrawal. Pacific Overtures He was later present on the Renegades' asteroid base when Zero called out Cy-Kill over his numerous leadership failures; ultimately he did not follow Stretch in joining Zero's growing breakaway group.The Third Column

Screw Head was one of the Enemy Machine Men from Robotron who joined Cy-Kill in targeting the peaceful planet Earth for conquest. Along with his comrades, Screw Head soon forced the Friendly Machine Men into a retreat while causing huge destruction. However, they regrouped and counter-attacked; whether he, Crain Brain and Spoiler would be able to fend off the counter-offensive was a matter for debate.Space Wars 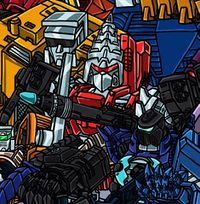 During the Diaspora, Screw Head was dispatched to Level 44 along with the RoGuns and several of his fellow Renegades. Cultural Appropriation

When a raid on a Guardian communications hub went bad, Cy-Kill was particularly harsh to his troops. So, when the Master Renegade appeared offering Power Suit upgrades to the Renegades if only they made him leader, Screw Head, Spoiler, Fly Trap, and Loco eagerly turned on Cy-Kill. Screw Head's re-engineered P4 suit gave him the power of teleportation. Eager to test their might, the Power Suited soldiers and the Master Renegade launched a direct assault on the Gobotron Fortress. When the time came to form a dark copy to battle Courageous directly, however, the "united" Renegades couldn't agree on who should control the combiner. The hobbled "Grungy" was easily beaten apart by Courageous, and the Renegades meekly limped back to Cy-Kill, begging for his good graces. Coup de Grunge

While preparing for a raid on UNECOM in Zurich, Switzerland, Screw Head surprisingly tunneled into an underground network of caverns populated by Mole Men. Cy-Kill wasted no time manipulating them into joining his noble cause against the Guardians. The Mole Men of Prototheria Screw Head accompanied Cy-Kill to the North Pole to drill a fallen meteorite for sorium. The Guardians intercepted their operation, though, and Good Knight blew up the meteorite. The Renegades were able to make off with only a small amount of sorium clinging to Screw Head's drill as they left. And to All a Good Knight

In a hybrid universe where the Transformers and GoBots coexisted, Crain Brain, Spoons, and Screw Head used their vehicle modes to breach the walls of Autobot City, singing as they went. Screw head was smashed by Kup when the Autobot used the Renegades as impromptu ramps. On the way back to Cybertron, Zero pushed Megatron and several other dying combatants out of Astrotrain. They found Unicron, and after Megatron bargained for his life he and his troops became new servants of Unicron. Screw Head was reformatted into one of the Sweeps, loyal to Deadlift. Echoes and Fragments 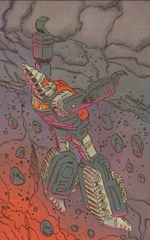 Screw Head was built for mining operations and formed a strong bond with his human partner Vernon. However the owners of their mine were lackadaisical about safety, and the pair were trapped by a roof fall. Screw Head attempted to get Vernon to safety but a further collapse killed the human, leaving the Go-Bot furious at the lack of concern shown by the mine owners. As a result he went rogue and joined up with Cy-Kill's Renegades, telling his story to them as the uprising began. Cy-Kill assured him that things would be put right. However, Screw Head rapidly became uneasy about the level of violence towards the humans, believing the Go-Bots should be showing humanity a better way. His concerns were brushed off by Cy-Kill, who stated the carnage was showing a better way. Issue 2

Screw Head's precise actions over the following centuries were unknown, though it was possible his mind was tampered with many times by Leader-1. Nevertheless he volunteered to join the self-styled King of Go-Bots, the time-lost Spay-C and the outcasts Turbo and Scooter in putting an end to Zod, who had been dropped into a chasm by the Go-Lems, acting as a guide on the way down and drilling an escape route once the task was completed, before getting his damage repaired by Rest-Q.Issue 4 He took no further part in the Go-Bots' war, opting to discreetly stay on Earth after Road Ranger separated the planet from Gobotron. When two of the astronauts who had travelled onboard Spay-C opted to stay behind and guide the primitive remains of the rest of the human race. However, they were attacked by Magmar in the area they named as the Valley of the Rock Lords. Screw Head appeared and fought the evil Go-Lem, eventually running him through on his drill-bit head before asking to join the humans. 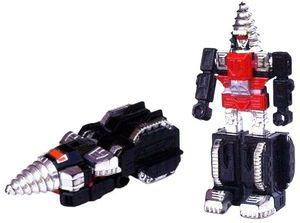 Screw Head was released by Tonka in the first series of GoBots, and converts from robot to futuristic drill tank in 3 steps. The toy was a repackaging of Drill Robo from Machine Robo, with no significant changes but omitting the extra sticker sheet of the Japanese version. Sadly his drill does not spin and is prone to chrome wear, though he does have decent shoulder articulation.
Screw Head was offered in the second assortment of GoBots figures manufactured in 1984 (#7201). The figure remained available in the second series' Enemy assortment (#7254), before being discontinued ahead of the third and final series.

Screw Head was released in a gift pack with Zero and Stinger. All three toys are unchanged from their original releases.