General Newcastle is one of the Guardians' human allies, and the head of UNECOM. He keeps a clear, logical head in the various crises two factions of shape-changing alien robots brought to his job. 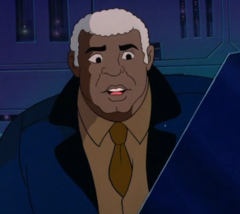 "Get me the Yorktown."

General Newcastle was a high-ranking member of NASA when the first overt contact was made with the GoBots. However, prompted by Doctor Braxis he disbelieved the account of the loss of the shuttle Intrepid given by the ship's crew Matt Hunter, Nick Burns and A.J. Foster, suspending all three from NASA.Battle for GoBotron Hunter later attempted to call Newcastle to inform him that Braxis was actually working for the Renegades; however, believing Matt to be insane he instead dispatched a security team to collect the fugitive astronaut. Target Earth

However after Braxis was exposed and GoBots became public knowledge the level-headed Newcastle was transferred over to head the new United Earth Command (UNECOM) agency, which would form an alliance with the Guardians, with Matt, Nick and A.J. becoming three of the organisation's key ambassadors. As such he was extremely worried when Leader-1, Small Foot, Matt, Nick, A.J. and the Last Engineer arrived, informing him that GoBotron had fallen to Cy-Kill and the Master Renegade. Correctly realising Earth was likely the Renegades' next target and put UNECOM's full resources at the disposal of the Last Engineer, resulting in the GoBeing completing his long-planned Power Suits.Flight to Earth Testing for the suits went well, and the fortunes of the Guardians and UNECOM soon took a further turn for the better when Turbo arrived with a Command Center full of surviving Guardians, though Leader-1 had to intervene in order to land the ship properly. The UNECOM crew helped repair the ship, enabling the Guardians to launch a counter-strike that eventually saw GoBotron retaken. Return to GoBotron

He briefed the Guardians on the detection of a Renegade mining base in the Vega star system, which the Guardians agreed to investigate. Cy-Kill's Cataclysmic Trap Newcastle then sat on the GoBotron Security Council when the Renegades freed Braxis from prison and forced him to build a new superweapon. Nova Beam He later appeared at a top-secret facility in Utah, interrogating Clive about the whereabouts of the missing Scooter. It's the Thought that Counts Newcastle reported the loss of UNECOM's new disruptor to the Renegades and the cyborg mercenary Trident, allowing them to co-ordinate a search mission. Trident's Triple Threat He received news of a new secret Renegade base from Scooter and Nick on a Command Center; however, the pair were shot down before they could deliver a full report. He drew some censure from others when he prioritised this intelligence over safe recovery of the pair. Dawn World Newcastle was later present when the Guardians demonstrated their new Space Bender before they were called away to an emergency in Washington, D.C.. Doppelganger

Newcastle suspected the Renegades were behind radical changes in Earth's weather but he was soon proven wrong when the antagonist turned out to be the disgraced Professor Robert Frost, though Cy-Kill soon took control of the rogue scientist's Climatizer, issuing an ultimatum that Earth sever its' ties with the Guardians in three hours or face a second ice age. After Leader-1 and Turbo were disabled trying to attack the device and the deadline drew close Newcastle was forced to consider acceding to Cy-Kill's demands, though Dive-Dive persuaded him to continue the fight and eventually disabled the machine. Cold Spell During an apparent lull in Renegade activity the Guardians switched to helping the authorities tackle human criminals. However, when Cy-Kill linked up with crime kingpin Murchison, Newcastle personally led an attempt by UNECOM to stop them marching on Washington, D.C. However, the Renegades' new force field technology meant they and Murchison's army of criminals couldn't be stopped until Matt and Flip Top were able to deactivate the shields. Crime Wave He asked the Guardians to look into a string of raids carried out by the Monster GoBots, even taking part in a sting that saw a pitched battle with Crasher, Cop-Tur and Pincher at an army base. Ultimately the raids were tracked to Cy-Kill's attempt to build Puzzler, which was eventually destroyed by Courageous. Auto Madic Later Newcastle forced to exile the Guardians when the Renegades used holographic image inducers into tricking humanity into believing Leader-1, Turbo and Scooter had become evil. He even scrambled jets when the real Guardians arrived in Earth orbit, though he was reluctant to do so. The Guardians were later able to capture Dr. Go and force him to testify about the scheme to a relieved Newcastle. Tarnished Image He later called upon Scooter to examine a discovery made by Doctor Cunningham, which turned out to be a relic of the Evil One; Newcastle sent the Guardian, Nick and A.J. were sent along with Cunningham to Ecuador in order to carry out a full investigation. In Search of Ancient GoBonauts When contact was lost with Leader-1's Command Center after it disappeared on a routine mission Newcastle conferred with Hans-Cuff, who opted to take a second ship to find them. Gameworld He requested Guardian help in fixing the Quantico Radar Telescope Wolf in the Fold and in dealing with a meteor shower heading for Micronesia, later arranging for a large naval taskforce to counter the Renegades' Starfish underwater base. Depth Charge He later interrogated Major Benedict after he was found to be a Renegade spy, assuring Mrs. Roberts her kidnapped son Sean would be found. The Seer 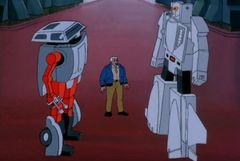 The General later led the assault team sent to find whoever had disabled the Guardians with a spectrometer and viciously interrogated the subject. However, it turned out Buddy was a harmless if somewhat careless (and to Newcastle confusing) young girl. However her system was later picked up on by the Renegades, who used it to turn the Guardians evil. Leader-1 bodily lifted Newcastle up and threatened him before destroying UNECOM's communications and setting off to abduct the Guardian Council. Whiz Kid He was later informed of a Renegade attack on the shuttle Resolute, though the encounter did allow Nick's new rail gun to be tested. Ring of Fire Newcastle played a key role as Earth's primary representative in peace talks with the Renegades at Vienna, travelling to the city via Command Center with Leader-1 and Professor Von Joy. He was very worried that Turbo's behaviour would wreck the agreement but as it was the Guardian's suspicions ultimately exposed the truth behind the conference - a Renegade scheme to destroy their enemies. Pacific Overtures After the Guardians captured Cy-Kill in a trap on Earth, Fitor and Geeper-Creeper feigned defection to free him. Leader-1 was sceptical as to this turn of events, though the bait of a stealth device and a Thruster swung the General over to listening to the pair. Escape from Elba He was later kidnapped and shrank down to a microscopic size along with the rest of Earth's population by Cy-Kill's use of Doctor Aeolis' condenser; when the Guardians reversed the process he returned none the wiser, demanding to know what was going on. Clutch of Doom Newcastle later chaired an AIL conference but was left confused when Leader-1 stole the new AIL chip that was being presented, being unaware he was under the influence of a Renegade-programmed exo-suit that inverted his personality. A New Suit for Leader-1 He later worked with the Guardians and the psychic Mira Shaw, congratulating all involved after seeing a Renegade attack easily repulsed. The General pushed Doctor Helstrom to finish his device to boost Shaw's abilities, though he was unaware that the scientist was actually a traitor working for the Renegades. Renegade Carnival He later expressed his unease over Matt's suggestion to retrieve an insane Braxis from a mental hospital in the hopes of finding a way of countering Roguestar, but ultimately did not opposed Leader-1's decision to go ahead with the plan. Braxis Gone Bonkers