The Renegades ally with the cyborg Trident to abduct world leaders with a super-powered Astro-Beam. 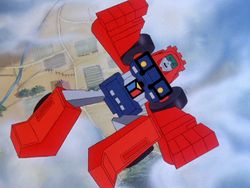 Small Foot is assigned guard duty on a high-speed train transporting UNECOM's new Disruptor weapon, which will hopefully be able to block the Regenades' Astro-Beam. She is accompanied by Matt, but neither is made to feel welcome by the brusque General Orlando, who is confident Guardian assistance is not needed to protect the Disruptor. Little do any aboard the train realize, the Renegades are fully aware of the "secret weapon," having been spying on the whole operation from the Caribbean island volcano base of their new ally, the cybernetic human Trident. Cy-Kill sends Crasher, Cop-Tur, and Loco to attack the train, and though Small Foot fights bravely, the evil trio overpower her and shoot her out of the air. Crasher disconnects the last car on the train, containing the Disruptor, Matt, and Orlando, and Loco assumes his train mode to couple up to it and drive off with it. 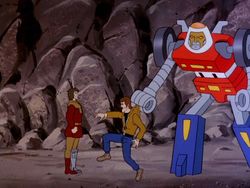 The Renegades take their prizes to Trident's volcano headquarters, where the villain explains to Matt and Orlando that he was one of the original scientists who worked on the creation of the Disruptor, and that he knows how to modify it to turn it into a "super Astro-Beam" with no time-limit. Matt tries to take a swing at the machine-man, but Cy-Kill holds him back and invites Trident to display the three functions of the cybernetic arm that gives him his name—crushing claw, powerful drill, and laser—just to punctuate how unwise a move Matt would have made in trying to fight him. Matt and Orlando are tossed in separate caves and sealed in with energy bars, and the villains return to their work—a scheme to use the Disrupter to abduct world leaders! 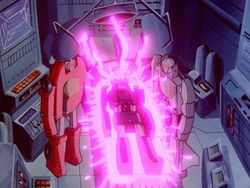 Having been away on another mission, Leader-1, Turbo, and Scooter return to UNECOM headquarters, where General Newcastle briefs them on what has occurred. While Turbo recovers the injured Small Foot, Scooter begins scanning the globe for the massive energy spike that will denote the activation of the Disruptor. A.J. and Nick are most concerned about Matt, however, so while the Guardians tend to Small Foot's wounds, the two humans take one of the base's jet fighters and follow Scooter's findings to the Caribbean.

In return for Cy-Kill's assurance that he will be "Renegade governor of Earth" once their plan succeeds, Trident activates the Disruptor, snatching the President of the United States right out of the White House. He continues to teleport more and more world leaders into cells within his base, including Prime Minister of the United Kingdom, but the continuous power surges caused by the machine's activation lead Nick and A.J. straight to the island. A blast from Loco sends their plane into a tailspin, but just as the kids think they are about to be smeared across the side of the volcano, a hidden hangar door opens in the mountainside, through which their failing craft glides. The jet comes to rest at the feet of Cy-Kill, who immediately grabs Nick and A.J. and tosses them in Matt's cell. 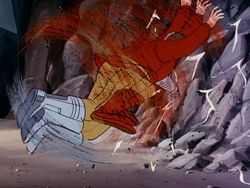 Following the energy spikes, the Guardians soon arrive in their Command Center. The Renegades fly out to meet them in battle, and while Leader-1, Turbo, and Small Foot engage their enemies—the latter hungry for some payback against Crasher—Scooter heads into the volcano to look for their human allies. Trident aids the Renegades by deploying the weapons systems hidden in the mountain, but Leader-1 turns the tables on him when he out-flies a barrage of heat-seeking missiles, causing them to double back and impact on the volcano itself. The feedback overloads Trident's control console, weakening the energy bars on the cells and allowing Matt, Nick, and A.J. to break out. Trident and Matt face off again, but the villain's drill attachment holds no fear for Matt; he grabs Trident and hurls him into the rock wall of the volcano, where his drill becomes embedded, causing his body to spin around violently until he passes out. Scooter takes over the control console and uses the Disruptor to teleport the Renegades across the galaxy to the Crescent Nebula, winning the day.

Once all the world leaders have been rescued, the President honors the Guardians for their help. General Orlando admits that the GoBots do have a role to play in protecting Earth after all, though Matt wishes there had been an easier way to prove it! 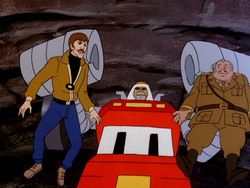 "Aren't you the catch of the day! I've been looking forward to your capture a long time, Mister Hunter!"
"Yeah? Well enjoy it while you can! 'Cause when the Guardians find out I've been kidnapped--"
"Kidnapped? What a naaaasty word. Let's just say you're my... permanent guests."

"Now my chess set is complete! It is full of kings, queens, and presidents... but all of them are pawns in my scheme!"

—Trident advances on Matt with his drill 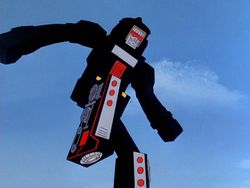 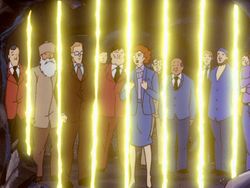 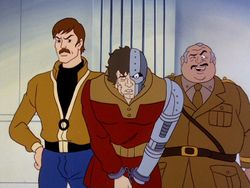