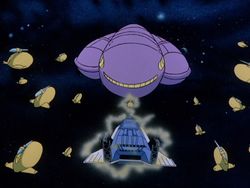 As the Guardians depart GoBotron in their Command Center, the Renegades launch a sneak attack aboard Thruster, striking the Guardian vessel from behind. Turbo fires back, knocking out Thruster's stealth device. Looking for a quick means of escape, the Renegades spy a strange-looking alien ship nearby, with a weapon of planet-shaking power mounted on its bow. Curious, Cy-Kill orders them in for a closer look, but when they get near, the ship seizes them in an energy field and drags them away, through a peculiar cloudbank. On the other side of the mists, the Renegades discover the ship is just one of a huge battle fleet commanded by a massive mothership, into which Thruster is carried. There, the Renegades are greeted by the armada's commander, Alva-Nar of the planet Nar-El, who introduces himself as a noble adventurer. Cy-Kill convinces the alien that the Guardians are the bad guys, and he sends his fleet to attack the Command Center as it draws near, following Thruster's trail. Alva-Nar brings the Guardians aboard his ship to verify Cy-Kill's claims with a truth scan; Leader-1 is happy to oblige, but Cy-Kill initially refuses, only acquiescing when Alva-Nar becomes suspicious. Cy-Kill is able to trick the Truth Scanner by carefully phrasing his answer so as not to actually lie, stating that "the Guardians are trying to eradicate us," which convinces Alva-Nar to side with the Renegades. The alien teleports the Guardians back to the Command Center, and announces his intent to help Cy-Kill "liberate" GoBotron. 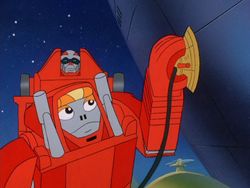 Cy-Kill immediately begins plotting to take control of Alva-Nar's fleet and use it to conquer the universe. The villains quickly takes control of GoBotron's Industrial Moon Zeta Three to use as a staging base, dispatching guards Staks and Wrong Way, who flee to GoBotron to warn the Guardian Council. Leader-1 tells the council to sit tight, and sends Turbo and Scooter down to the surface of the moon to investigate. They easily sneak by the parked ships—in which Scooter is puzzled to detect no lifeforms to pilot them—and listen in on Alva-Nar and the Renegades as the alien's computer divulges a battle plan for the attack on GoBotron itself the following day. The news that the attack will take only three minutes is alarming, but they come away with a piece of vital information: the ships are just drones, programmed and controlled by Alva-Nar himself. The pair attempt to return with this news to Leader-1, but their departure is detected by Alva-Nar's computer, and Cy-Kill sends Crasher and Cop-Tur to stop them. Leader-1 arrives to join the fight, but after a few blaster bolts are traded, Alva-Nar has a reluctant Cy-Kill call the Renegades off, on the basis that they're wasting time, and there's nothing the Guardians can do to stop them anyway. 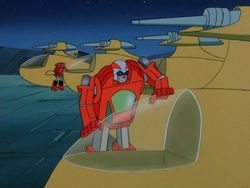 The Renegades return to Alva-Nar's ship, where he sternly warns them that, after GoBotron has been reclaimed, there will be peace, not further reprisal against the Guardians. The Renegades all nod, though Crasher can't fully suppress her trademark cackle. Simultaneously, the Guardians exploit Alva-Nar's disinterest in them to sneak back to where his drones are parked, so that Scooter and Turbo can attempt to reprogram them manually. Scooter accidentally activates one, which takes off with him stuck inside. Cy-Kill boards another drone and gives chase, blasting Scooter's drone to bits and leaving the little Guardian floating in space. Leader-1 speeds to his rescue, but this escapade has given Turbo the time needed to take control of the drone he was working on, which he uses to attack the returning Cy-Kill. After shooting Cy-Kill out of the sky, Turbo abandons his drone and leads Crasher a merry chase across the moon, while Cop-Tur and Alva-Nar recover the badly-damaged Cy-Kill for repairs. 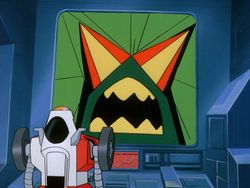 The Guardians prepare through the night for the impending attack, while Alva-Nar uses his ship's facilities to repair Cy-Kill. Just as the attack is set to commence the next day, Cy-Kill makes his play to take over the drone fleet... only to find that Alva-Nar's computer refuses to take orders from him! Deploying a battery of weapons of its own, the computer forces Cy-Kill to cede command back to Alva-Nar, who agrees to continue with the attack on GoBotron all the same. The fleet moves into the planet's atmosphere and soon comes under fire from the Guardians' prepared defenses... but Alva-Nar refuses to fire a single shot in return, and instead orders Cy-Kill and the Renegades off his ship. Realizing that Cy-Kill's failed takeover bid has made the alien wise to their true natures, the Renegades have no choice but to depart aboard Thruster, reluctantly flying right into the barrage of Guardian fire going on outside. With their weapons systems disabled by Alva-Nar, the villains cannot shoot back, and only just manage to limp away to safety when their stealth device finally recharges at the last minute. Alva-Nar apologizes to the Guardians and makes peace with them, then departs to continue on his adventures. Scooter is just glad the whole thing is over, and is exasperated when Leader-1 suggests they head after Cy-Kill right away! 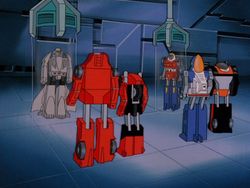 "Maybe we should give up."
"I will not tolerate defeatism, Cop-Tur!"
"Sorr-ryyyy. Only kidding."

"Those Renegades couldn't tell the truth if all their diodes depended on it!"
"You see how vicious they are, Alva-Naarrrrr!"

Alva-Nar: "How long should the attack take?"
Computer: "All variables considered... about three minutes."
Cy-Kill: "That long, huh? Hahahahaha!" 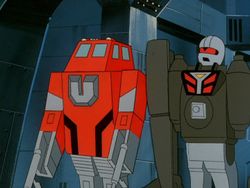 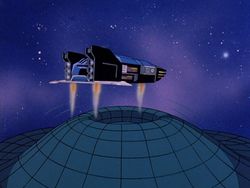 If Primus were GoBotron, we'd assume this would be his butt. 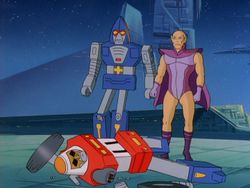